Analysis| Narrative, not Opposition unity, is BJP’s bigger worry ahead of 2019 polls

The BJP won almost half of its 282 seats in 2014 with a vote share of 50% or more. This is 15 percentage points more than the share of BJP victories with a similar vote share between 1989 and 2009.
Share Via
Copy Link
Hindistan Times, New Delhi | ByRoshan Kishore and Vijdan Mohammad Kawoosa

The most awaited number in 2019 will be the number of seats the Bharatiya Janata Party (BJP) wins in the next Lok Sabha elections. Both arithmetic and chemistry will matter in deciding this number. Attempts are underway to form a pre-poll alliance in as many seats as possible to prevent potential gains to the BJP from fragmentation of opposition votes. The BJP will hope to repeat its 2014 performance by leveraging Narendra Modi’s charisma. Which of these will matter more?

Two sets of numbers can help answer this question. The first is the BJP’s vote share in seats where it emerged victorious in 2014. This tells us about the importance of chemistry. For example, in seats where the BJP has a more than 50% vote share, no pre-poll alliance can spoil its chances unless there is an erosion of its existing voter-base. The second is the share of seats won by the BJP where the combined vote share of number two and number three candidates was bigger than the BJP’s vote share in 2014. In these seats, a pre-poll alliance will pose a significant risk to the party.

To be sure, relying on only 2014 figures for such an analysis could be misleading simply because 2014 was not a normal election in India’s political history. It was after 30 years that a party (BJP) managed to win a majority on its own in the Lok Sabha.

One could use this to argue that 2019 will see a restoration of the normal which existed between 1989 and 2009 (although 2009, again, was a unique election in some ways). This may entail a reduction in the BJP’s tally. One could also claim that 2014 is the new normal for Indian politics and the BJP will continue to be the dominant force. This debate will remain inconclusive until the 2019 verdict.

One way to bring some clarity in this debate is to compare the BJP’s performance in the 2014 elections with its electoral performance between 1989 and 2009. Although the BJP was formed in 1980, it first made its mark as a national party in the 1989 elections, when it won 85 seats in the Lok Sabha.

On the other hand, the share of seats won by the BJP where the party would have lost if the vote share of the number two and number three parties are combined, was 32% in 2014 compared to 49% between 1989 and 2009. These statistics tell us that in comparison to its earlier victories, the BJP’s 2014 victory was more a function of the party’s chemistry with the masses than the result of a fragmented opposition. Does this mean that the BJP can be assured of its 2019 performance being closer to 2014?

Two sets of statistics are worth highlighting here. Although the BJP’s vulnerability to a combined opposition went down in 2014 compared to the 1989-2009 phase, it was geographically more concentrated in the former.

The share of Uttar Pradesh, Bihar, and Jharkhand in the number of seats where the BJP could have lost to a combined vote share of first and second runner up was 66% in 2014, compared to just 48% (this also includes Uttarakhand) between 1989 and 2009.

These three states account for 134 Lok Sabha seats, of which the BJP won 105 in the 2014 elections. With the prospects of opposition unity in these three states quite high, the BJP’s tally might come down. 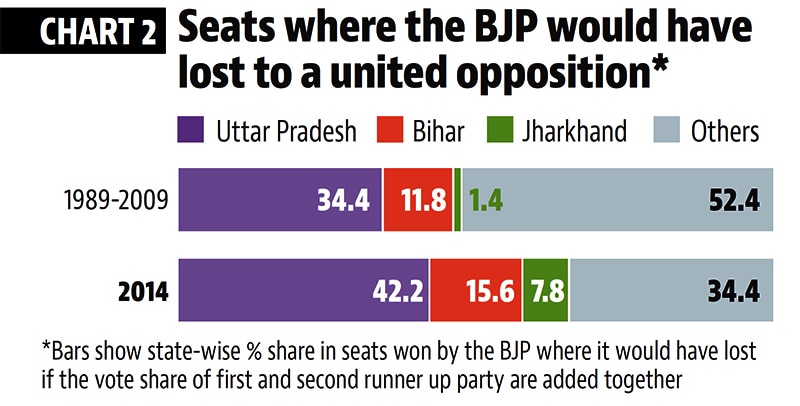 Another factor which helped the BJP make substantive gains in 2014 was its stellar performance in direct contests against the Congress. There were 189 seats in 2014 where the BJP and the Congress were in a direct contest. This means that if the BJP came first, the Congress finished second, or vice versa. The BJP won 88% of these seats. This figure was just 58% for such seats between 1989 and 2009.

This is where the results of recently held assembly elections in the states of Rajasthan, Madhya Pradesh and Chhattisgarh will worry the BJP. It lost all three to the Congress in a direct contest. It was the 2013 election cycle involving these three states which marked the beginning of the “Modi Wave”.

A Hindustan Times analysis shows that the BJP’s 2018 average vote share in the seats it won in these states (both median and mean) was not only lower than the 2013 figures, but also less than the corresponding values for the period between 1990-2008.

This shows that the share of seats where the BJP wins with a bigger margin is coming down. If this trend holds for other Hindi belt states too, the BJP might become vulnerable to a united opposition in seats even where it was ahead of the number two and number three parties put together. To be sure, there is another way of looking at the Hindi belt results. The fact that the Congress was able to defeat the BJP without an alliance in Chhattisgarh, Madhya Pradesh and Rajasthan shows that chemistry could still score over arithmetic.

This also means that the BJP coming up with an attractive enough narrative might tilt the scales in its favour once again. This is why the campaign for 2019 will be as much about narratives as it is about alliances.