Diabetes deaths due to air pollution highest in India

The burden of Type 2 diabetes contributed by exposure to fine particulate pollution is the highest in India, according to the State of Global Air 2019 report released on Wednesday. Air pollution lowers insulin sensitivity, contributing to diabetes.

In 2017, exposure to PM 2.5 pollution was found to be the third leading risk factor globally for Type 2 diabetes-related deaths and disability after high blood sugar and excessive body weight.

Globally, such exposure contributed to about 2.76 lakh deaths and 15.2 million life years lost to disability in 2017. This burden was highest in India, where it accounted for 55,000 deaths and 2.7 million life years lost, according to the report by Health Effects Institute (HEI) and Institute of Health Metrics and Evaluation’s Global Burden of Disease project. India was followed by China, Indonesia, Mexico and Brazil.

“PM 2.5 particles are endocrine disruptors. They can affect insulin secretion and insulin sensitivity. They can also damage the beta cells in the pancreas that produces insulin... the exact pathways are not known yet. But increasingly, research is showing these connections. So apart from poor diet, obesity etc., air pollution definitely plays a role in diabetes,” said Dr Vishwanathan Mohan, diabetologist and chairman of Dr Mohan’s Diabetes Specialties Centre 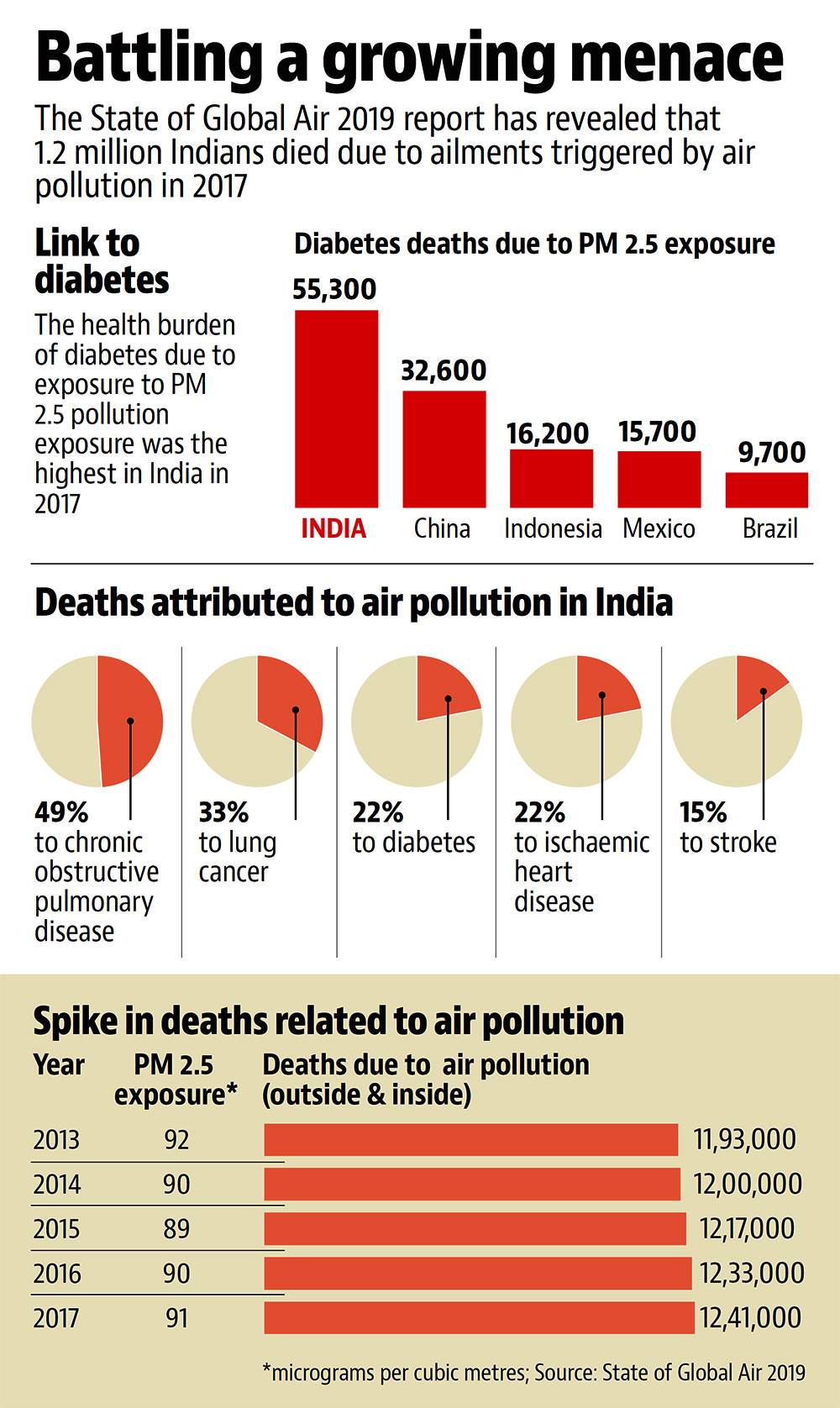 Diabetes affected at least 65 million people in India in 2017, according to The Lancet Global Health study released last year.

India also tops a list of 13 countries, with populations over 50 million, in which more than 10% of the population was exposed to household air pollution by use of solid fuels. About 60% of India’s population was exposed to household pollution, followed by China with 32%. However, the report recognises that the proportion of households cooking with solid fuels in India has dipped from 76% in 2005 to 60% (846 million) in 2017, “due in part to a major government program to shift households from solid fuels to liquefied petroleum gas.”

Exposure to outdoor and indoor air pollution together contributed to over 1.2 million deaths in India and China in 2017, the report said. Globally, air pollution (PM 2.5, household and ozone emissions) is estimated to have contributed to about 4.9 million deaths — 8.7% of all deaths globally and 5.9% of all life years lost to disability. India and China have the highest health burden from air pollution, followed by Pakistan, Indonesia, Bangladesh and Nigeria.