The agreement will provide zero duty exports to 100% tariff lines from India to the Australian market, benefiting labour-intensive sectors besides providing greater access to the services space.

New Delhi: India and Australia on Saturday signed a comprehensive interim free-trade agreement that will provide zero duty exports to 100% tariff lines from India to the Australian market, benefiting labour-intensive sectors besides providing greater access to the services space.

Liberalised visa norms for students and professionals, including quota for Indian chefs and yoga teachers, is among the highlights of the deal, which will cut tariffs on billions of dollars of commerce as the two countries boost their relations.

Tariffs will be eliminated on more than 85% of Australian goods export to India, which will rise to about 91% over 10 years. While 97% of Indian goods will immediately gain preferential access to Australia after the agreement is operationalised, the rest will happen in the next five years, according to officials. 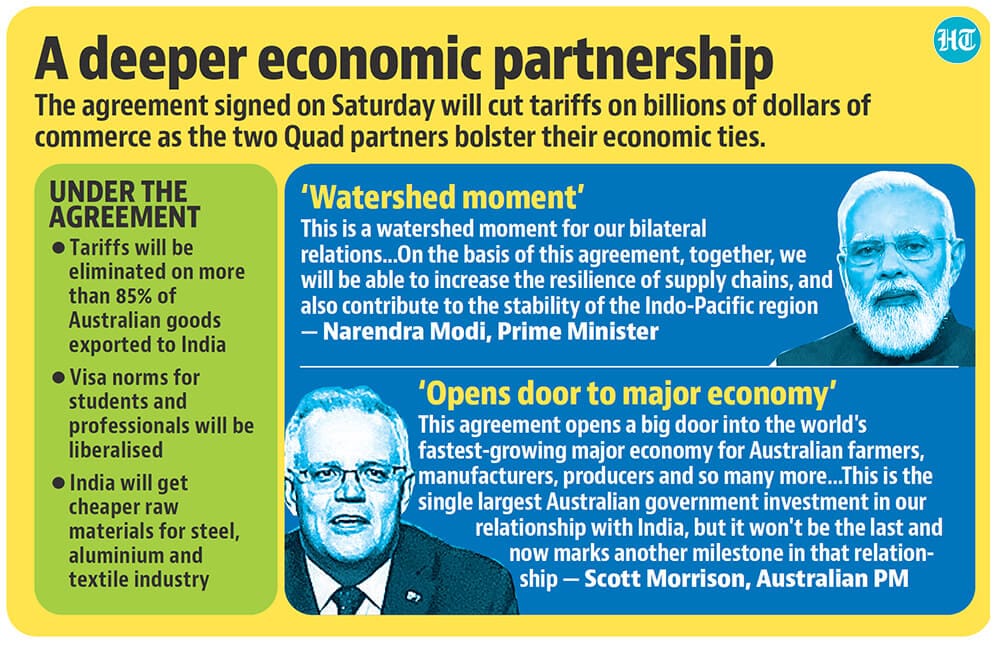 Commerce minister Piyush Goyal said both countries have been “very fair and reasonable” in terms of local sensitivities related to trade in goods and services “and, therefore, I believe this is a win-win agreement” for the two partners.

“This is a watershed moment for our bilateral relations,” Modi said. “On the basis of this agreement, together, we will be able to increase the resilience of supply chains, and also contribute to the stability of the Indo-Pacific region,” he added.

Through the agreement, India will get cheaper raw materials for steel, aluminium and textile industry from Australia for value addition. The agreement, however, restricts imports of cotton, particularly the small staple kind that is grown in India.

Modi said the “people to people” relation is the key pillar of the ties between India and Australia. “This agreement will facilitate the exchange of students, professionals, and tourists between us, which will further strengthen these relations,” he said.

Under the agreement, Australia has given an annual quota of 1,800 for qualified Indian traditional chefs and yoga teachers. The pact also allows post-study work visa of two to four years for Indian students on reciprocal basis. Currently, over 100,000 Indian students are enrolled in Australian institutes.

Speaking about the scope of the agreement, Goyal said the pact will double the bilateral trade between the two countries from the existing $27 billion in the next five years and create about one million jobs in India. India’s merchandise exports are mainly finished products and they totalled $6.9 billion in 2021, while imports from Australia were largely raw materials and intermediary goods such as coal worth $15.1 billion that year.

Also Read | Why India-Australian interim FTA is more about strategy than trade ?

The India-Australia ECTA is the first trade agreement of India with a developed country after more than a decade, Goyal said. The agreement comprehensively covers key areas such as rules of origin, technical barriers to trade (TBT), sanitary and phytosanitary (SPS) measures, dispute settlement, movement of natural persons, telecom, customs procedures and pharmaceutical products.

In order to protect the domestic wine industry, India permitted concessional import of only such Australian wines that have a minimum import price of $5 per bottle with a reduced tariff of 100% compared to 150% earlier. It would be further reduced to 50% over 10 years. Goyal said the domestic industry was on board about this move as it saw a deepening of the wine market and predicted Australian investments in the sector.

The deal, which is expected to be in force in the next four months, would see cheaper imports of avocados, kidney and adzuki beans, cherries, shelled pistachios, macadamia nuts, cashews in shell, blueberries, raspberries, blackberries and currants as the 30% duty on them would go in seven years.

According to the Australian government, tariffs on almonds, lentils, oranges, mandarins, pears, apricots and strawberries will be reduced, improving opportunities for Australia’s horticulture industry to supply India’s growing food demand.

“The resources sector will benefit from the elimination of tariffs on entry into force for coal, alumina, metallic ores, including manganese, copper and nickel; and critical minerals including titanium and zirconium,” it said, adding that liquefied natural gas will be bound by zero duty.

Quoting Tehan, it said: “This agreement will turbocharge our close, long-standing and highly complementary economic relationship in areas such as critical minerals, professional services, education and tourism.”

“It will create new opportunities for jobs and businesses in both countries, while laying the foundations for a full free trade agreement,” Tehan said. India and Australia have also agreed to undertake cooperation to promote agricultural trade as part of the agreement and will now work toward concluding an enhanced agricultural memorandum of understanding (MoU), he added.

The industry lauded the deal. Federation of Indian Export Organisations (FIEO) president A Sakthivel said: “This agreement will be a win-win for both sides, as it will give a boost to India’s labour-intensive manufacturing sector, with a considerable advantage to the pharma, apparel and textile, engineering, automobile and auto components, gemstone and jewellery sectors.”

“We will be gaining much market share as we will now have a level playing field with many competitors who have signed FTAs with Australia earlier,” he said.

Confederation of Indian Industry (CII) director general Chandrajit Banerjee said getting zero-duty access on almost 97% of value of India’s exports immediately is a remarkable gain for the Indian industry. “As Australia would be a complete zero duty market for Indian exports in the next five years, industry would strategise well to access Australian markets,” he said.