The Congress-Janata Dal (Secular) government of Karnataka is tottering after 12 MLAs of the ruling coalition handed their resignations to the assembly speaker.The Congress has accused the BJP of trying to topple the state government and dismissed talk of a crisis.The BJP has said it is ready to form the government if the governor invites them but insisted that it had nothing to do with the differences in the Congress-JD(S) combine.Catch the highlights here :

Supreme Court to pass order in Karnataka rebel MLAs case tomorrow at 10:30 am

Karnataka Ministers from the Congress party called for breakfast by Deputy Chief Minister of Karnataka G. Parameshwara, at his residence in Bengaluru, tomorrow. (file pic) pic.twitter.com/E0rdBFiiNC

Naseem Khan, MLA from Congress alleged that BJP leaders were allowed to enter Sofitel hotel, according to ANI

He alleged that BJP was pressurizing the MLAs and he wasn’t allowed to enter the hotel premises.

Mumbai: Naseem Khan, a Congress MLA from Mumbai, was stopped from entering Sofitel hotel where the rebel #Karnataka Congress-JD(S) MLAs are staying, earlier today. Khan said, "BJP leaders are allowed to go inside. They're pressurising the MLAs, but I'm not allowed to go". pic.twitter.com/gR1mB6Rsff

Minister MB Patil and Deputy CM G Parameshwara Rao have come along with the former CM.

The meeting is also attended by other senior Congress leaders.

He further added, that, MLAs Ramalinga Reddy, Munirathna and Anand Singh will join him tomorrow in Mumbai.

‘BJP is destabilizing the government in Karnataka’: Congress’ Mallikarjun Kharge

The senior Congress leader said that the BJP is carrying out simultaneous destabilizing in 14 states where they are pressurizing not only Congress MLAs but also members of other regional parties.

Mallikarjun Kharge, Congress: Govt should run as per Constitution. It is a constitutionally elected govt in Karnataka. They (BJP) are destabilizing it. In about 14 states, they are pressurizing, not only Congress MLAs, but also the regional party members. pic.twitter.com/kxQ0Cve7z5

Karnataka Congress MLA ST Somashekar outside Sofitel hotel in Mumbai: We 13 MLAs submitted resignation to the Speaker & informed Governor. We all are together. No question of going back to Bengaluru & withdrawing the resignations. pic.twitter.com/0ae0ttAlgo

Karnataka CM will address a meeting with JD(S) MLAs. A parallel meeting with Congress lawmakers is being held at senior Congress leader Mallikarjun Kharge’s residence.

‘If Siddaramaiah is chosen CM, then we have no objection’: GT Devegowda, Karnataka minister

The JD(S) lawmaker is in the airport meeting CM HD Kumaraswamy. According to ANI, GT Devegowda has said that the Congress is making efforts to save the coalition government. He also added that some senior members will have to resign from the cabinet to make for others.

GT Devegowda, JDS in Bengaluru: If the coordination committee decides that Siddaramaiah should be the CM, we have no objection. Congress is making efforts to save the govt. They have told the members that some seniors should resign from cabinet & make way for others. pic.twitter.com/OAZOiVDxGa

GT Devegowda says AH Vishwanath will return to the government, according to ANI

GT Devegowda from the JD(S) who is also the higher education minister said, if both parties agree to make Congress’ Siddaramaiah he’s okay with it, and he is also fine if they decide to make a CM from JD(S), according to ANI

GT Devegowda, JDS at party headquarters (JP Bhavan) in Bengaluru: I spoke to H Vishwanath, he told he'll come back. If both the parties decide to make Siddaramaiah as CM or any other from JDS party or from Congress party, I am okay with it. https://t.co/sfXnMofDQS

The Karnataka minister said, he would not join BJP. He said, the coalition government is for the betterment of Karnataka, according to ANI.

GT Devegowda, JDS at party headquarters (JP Bhavan) in Bengaluru: If my party decides, I am ready to resign. I am not going to BJP. Ours is a coalition government for the betterment of state. #Karnataka pic.twitter.com/wdimkcYNlN

The Karnataka CM who was in US, reached Bengaluru on a special flight from Delhi and will meet the JD(S) MLAs at the Taj West End, Bengaluru

Tight security around Taj West End hotel where the CM will meet the JD(S) MLAs.

The Karnataka Pradesh Congress Committee has issued a circular asking all of their MLAs to be present at CLP meeting on Tuesday called by CLP Leader Siddaramaiah.

Circular also mentions that strict action will be taken against those Congress MLAs who don't attend the Congress Legislature Party (CLP) meeting https://t.co/Cp6E6u45LO

Circular has been issued by Congress to all MLAs to attend Congress Legislature Party (CLP) meeting called by CLP leader Siddaramaiah on July 9. Karnataka Congress in charge KC Venugopal & Karnataka Congress chief Dinesh Gundu Rao will also be present in the meet. pic.twitter.com/AurIYewEc7

The CLP meeting is scheduled to be held at Vidhana Soudha at Bengaluru.

Congress workers on Sunday staged a protest outside the Karnataka Pradesh Congress Committee (KPCC) office here, demanding Congress MLAs to withdraw their resignations for the smooth functioning of the HD Kumaraswamy-led JD(S)-Congress government in the state, according to news agency ANI.

Congress workers were seen holding up placards seated outside the party office. With party flags in their hands, the protestors were seen raising slogans, the news agency reported.

Congress MLAs resigning because of their inactivity: Javadekar

In the wake of the political crisis in Karnataka, Union Minister Prakash Javadekar on Saturday hit out at Congress saying their MLAs are resigning as they are losing the plot because of their inactivity.

Speaking at the BJP’s membership drive here, Javadekar said, “Congress MLAs are resigning in Karnataka. Former Andhra Pradesh Chief Minister N Bhaskar Rao joined BJP yesterday. The whole atmosphere is in favour of BJP and the opposition is losing the plot because they are inactive,” reported news agency ANI

Everybody is loyal to the party: Siddaramaiah

The coalition government in Karnataka slumped into crisis on Saturday following the resignation of their 11 MLAs from the membership of the state Assembly. The rebel legislators are lodged at a hotel in Mumbai.

A senior Congress, who is in charge of keeping the flock of legislators together, on Sunday blamed party strongman Siddaramaiah for sabotaging the Karnataka government coalition, terming the former chief minister “a thief inside the party”, according to news agency ANI.

The senior party leader, on condition of anonymity, said Siddaramaiah is “playing games” to wreck the Congress-JD(S) coalition for “his prestige”.

“There are thieves inside the house (Congress). One man (Siddaramaiah) is doing this for his prestige. He is playing all these games. MLAs who are there (in Mumbai) are in constant touch with Siddaramaiah but I don’t know what my party high command is doing,” the senior Congress leader stated.

Earlier today, Siddaramaiah refuting claims about him being the reason behind the crisis.

Know about it only through media: Maharashtra BJP’s Prasad Lad

When Maharashtra BJP Vice President and MLC, Prasad Lad was asked about political situation in Karnataka he said that he knew about it only through media that he is busy with the party membership drive, according to news agency ANI.

Karnataka Chief Minister HD Kumaraswamy will be flying back to India from the US on Sunday evening, news agency ANI reported.

Kumaraswamy had to cut short his visit due to the ongoing political turmoil triggered in the state in his absence.

The JD(S) has called for a legislative party meeting today evening.

Meanwhile, a meeting took place between senior Congress leader DK Shivakumar and JD(S) supremo HD Deve Gowda in the backdrop of the dramatic developments in the state.

“They’ve (JDS) called a meeting of their party leaders. We’ll also call our party leaders and sort out this issue. I’m confident things will cool down immediately. In interest of nation and both parties we’ve to run government smoothly. I’m confident MLAs will come back,” Congress’ DK Shivakumar was quoted as saying by news agency ANI. 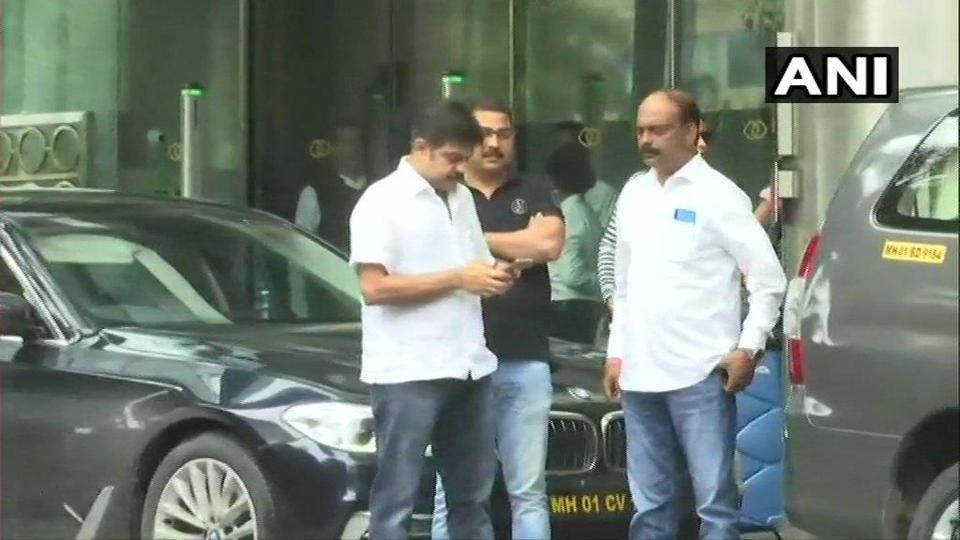 Not aware of presence of dissident K’taka MLAs in Mumbai: BJP

The Maharashtra BJP claimed on Sunday that it was not aware of the presence any of the 10 dissident MLAs of the Congress-JD(S) combine from Karnataka in Mumbai.

The JD(S)-Congress government in Karnataka plunged into a crisis on Saturday, with 13 MLAs of the alliance submitting their resignation to the speaker.

After submitting the resignations, 10 MLAs flew by a chartered flight and arrived at a hotel in Mumbai late Saturday night, sources close to them said.

Siddaramaiah says ‘no threat’ to Congress-JD(S) govt in Karnataka

Senior Congress leader and former Karnataka chief minister Siddaramaiah on Sunday said that there was no threat to the Congress-Janata Dal (Secular) government in the state.

“This clearly shows that BJP is behind all these defections. It is Operation Kamala...Everything is fine. Don’t worry. Govt will survive, there is no threat to the govt,” Siddaramaiah was quoted as saying by news agency ANI.

The BJP has said it is ready to form the government if the governor invites them but insisted that it had nothing to do with the differences in the Congress-JD(S) combine. “Let’s wait and see. I don’t want to answer to what HD Kumaraswamy and Siddaramaiah say. I am nowhere related to this (crisis),” Yeddyurappa was quoted as saying by ANI.

The two leaders met a day after the 13 month-old coalition government of their parties slumped into crisis following the resignation of 11 of their legislators from the membership of the state Assembly.

Responding to the developments, BJP state chief BS Yeddyurappa on Sunday said, “I am going to Tumkur and I will come back at 4 pm. You know about the political developments. Let’s wait and see. I do not want to answer to what HD Kumaraswamy and Siddaramaiah say. I am nowhere related to this.”