Agrarian distress and allegations of corruption against the Bharatiya Janata Party (BJP)-led government at the Centre are likely to be the key planks for leaders from different opposition parties to come together at a crucial meeting today, according to people familiar with the matter.At the meeting, meant to chalk out a framework for Opposition unity ahead of the 2019 Lok Sabha polls, the parties will also chalk out a strategy to counter

“From CBI to RBI, institutions have become total disasters. It is matter of great shock,” Mamata Banerjee on RBI governor Urijit Patel’s resignation.

‘We respect every party’: Rahul on why no representation from SP, BSP

“This is a process of bringing together everybody. We respect each and every party,” said Rahul Gandhi on why SP and BSP did not attend the Opposition meeting.

“It was historical meeting today. Main motto of the meeting save India, save democracy. The RBI governor tried his best to protect the institution.

Coming together is a democratic compulsion for all of us,” said N Chandrababu Naidu after Opposition meet.

‘Why was RBI governor unable to function’, asks Rahul

“What is happening that the government is getting desperate. RBI governor was not able to function. RBI governor is resigning because he’s protecting the institution of RBI. Taking away reserves from RBI to save your skin is an act against this nation. I’m very proud that people from all walks of life and institutions are standing up to it,” said Rahul Gandhi.

“There is an assault from the BJP on the institutions like RBI and CBI among others. RBI Governor is resigning because he is protecting the institution of RBI,” said Gandhi.

‘We will work together to defeat BJP/RSS’: Rahul Gandhi

“In the middle of the meeting we were told that the BJP/RSS agenda is progressing and that RBI governor has resigned. There was consensus that we will work together to defeat BJP/RSS,” said Rahul Gandhi while addressing media after the meet.

After she left the Opposition meeting owing to other engagements, Mamata Banerjee suggested that the meeting should be continued tomorrow.

Oppn leaders to meet President over misuse of agencies: Mamata

“Opposition leaders will meet the President over misuse of agencies,” says Mamata Banerjee.

“BJP is behaving like dictator, there should be campaign against this rule. We are discussing the issues and we will continue to do so,” says Mamata Banerjee.

17 parties attend Oppn meeting, no representation from BSP, SP yet

A total of 17 parties are present in the meeting of opposition leaders that is underway at Parliament House Annexe in Delhi. There is no representation from Bahujan Samaj Party (BSP) and Samajwadi Party (SP) yet, according to news agency ANI. 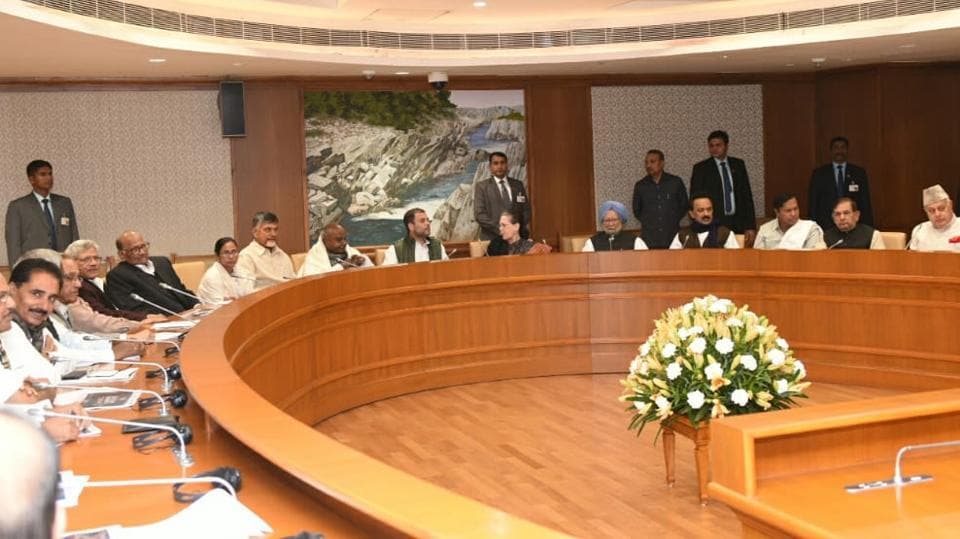 MK Stalin meets Delhi chief minister Arvind Kejriwal and invited him for the unveiling of Thalaivar Kalaignar’s statue in Chennai on 16 December.

Met Chief Minister @ArvindKejriwal in Delhi and invited him for the unveiling of Thalaivar Kalaignar's statue in Chennai on 16 December.

It was a good meeting and we had an interesting conversation on many topics. pic.twitter.com/n1vPaoS9DO

The Aam Aadmi Party (AAP) is likely to join the Congress and other opposition parties in the meeting to forge a common strategy to fight the 2019 Lok Sabha elections.

Stalin called on Sonia ahead of opposition meeting

Ahead of the crucial meeting of opposition parties in their bid to forge an anti-BJP front, the Dravida Munnetra Kazhagam president and Tamil Nadu leader of opposition,MK Stalin, on Sunday called on veteran Congress party leader Sonia Gandhi on her 72nd birthday.

Stalin also discussed a range of issues including poll strategies for 2019 Lok Sabha elections and Mekadatu project of Congress-JD(S)-ruled Karnataka government, which is drawing flak from Tamil Nadu.

Samajwadi Party leader Mulayam Singh Yadav will join the Congress and other opposition parties in the meeting called by Andhra Pradesh chief minister and TDP supremo N Chandrababu Naidu to forge a common strategy to fight the 2019 Lok Sabha elections.

Opposition parties will chalk out strategies to counter BJP

The opposition parties will also chalk out a strategy to counter the BJP during the Winter session of Parliament starting on Tuesday.

MK Stalin and Kanimozhi met NCP chief Shard Pawar in Delhi today and held discussions over multiple issues. The DMK president also invited him for the inauguration ceremony of the statue of M Karunanidhi in Chennai.

Telugu Desam Party (TDP) will raise the issue of CBI-Andhra Pradesh government row in the winter session of the Parliament and in today’s opposition meet.