Prime Minister Narendra Modi and President Joe Biden, who met in Tokyo on the margins of the Quad Summit, reviewed progress under the bilateral comprehensive global strategic partnership

New Delhi: India and the US on Tuesday launched an initiative spearheaded by their National Security Councils to cooperate on critical technologies, committed to deepen the India-US Major Defence Partnership and pledged to work jointly for a rules-based international order, and a connected and secure world.

Prime Minister Narendra Modi and President Joe Biden, who met in Tokyo on the margins of the Quad Summit, reviewed progress under the bilateral comprehensive global strategic partnership, and talked about a range of issues, including cooperation in global health and pandemic preparedness.

In remarks to the media before the meeting, Modi said the two sides have a strategic partnership based on trust, and their common interests in defence and their shared values have strengthened the bond of trust. “I am absolutely sure the India-US friendship will continue to be a force for good for global peace and stability, for sustainability of the planet and for human development,” he said.

Biden said both democracies are delivering through bilateral cooperation and Quad for the world. He added the new Indo-Pacific Economic Framework (IPEF) and the Indo-Pacific Partnership for Maritime Domain Awareness reflect the vision of the two sides for a more connected and secure world. “I am committed to making the US-India partnership among the closest we have on earth,” he said. 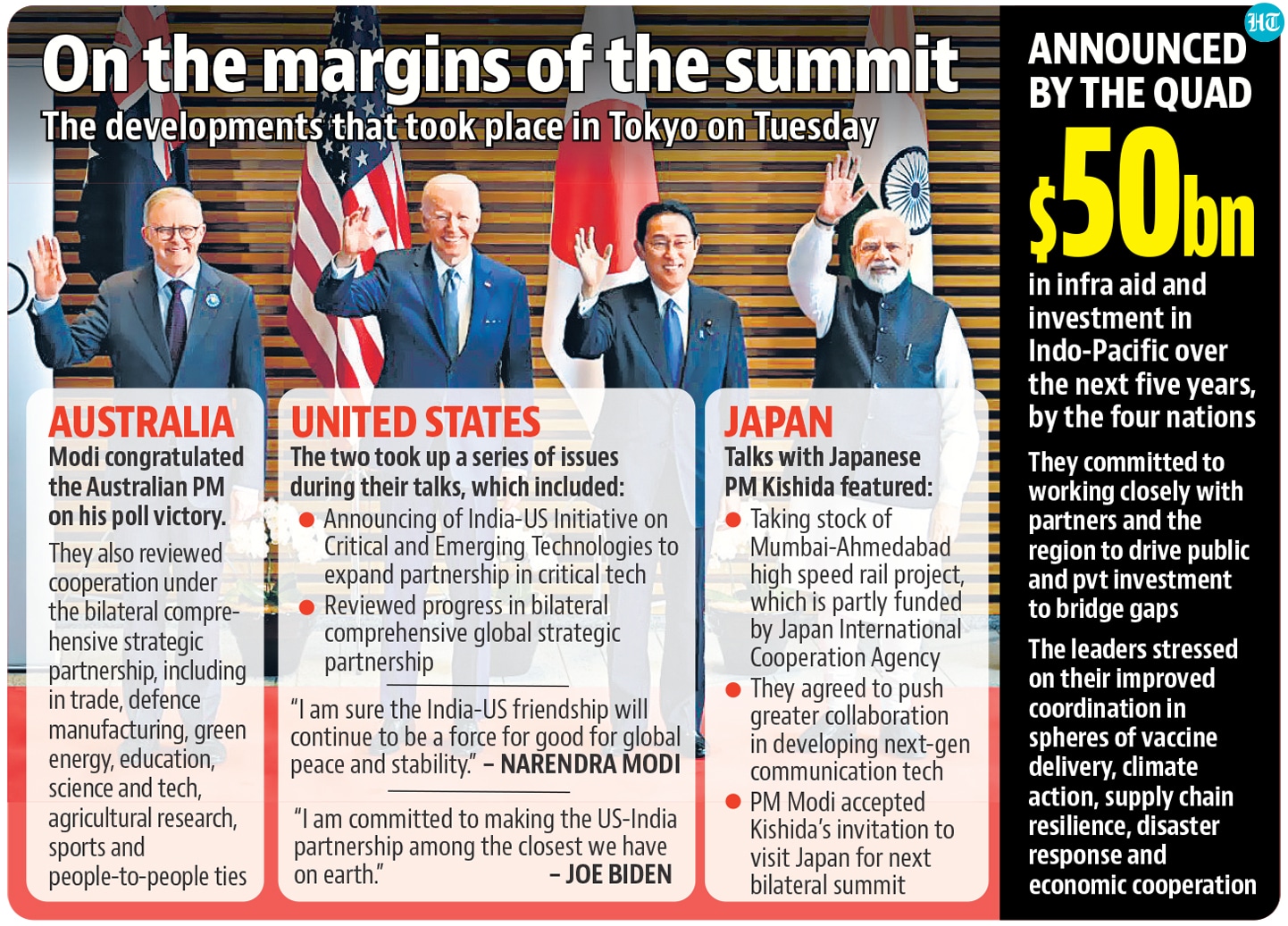 Biden said he was pleased the two sides had reached an agreement for the US Development Finance Corporation (DFC) to continue its work in India in supporting vaccine production and clean energy. India and the US on Monday signed the Investment Incentive Agreement (IIA) that is expected to lead to enhanced support from DFC.

While describing defence and security cooperation as a crucial pillar of the bilateral agenda, the two sides discussed ways to strengthen collaboration in this field. Modi invited US industry to partner with India to “manufacture in India under the Make in India and Aatmanirbhar Bharat, or Self-reliant India, programmes”, the external affairs ministry said.

The White House readout said the two leaders committed to deepen the Major Defence Partnership. The two sides will also expand cooperation in new defence domains, including through space, cyber and launching a dialogue on artificial intelligence this year.

In 2016, the US declared India a Major Defence Partner, which commits the American side to facilitate technology sharing at the highest levels and industry collaboration for defence co-production and co-development.

The two sides announced India joining the Combined Maritime Forces (CMF)-Bahrain as an associate member. CMF, which is led by a US vice admiral, was established in 2001 to counter international terrorism and piracy and currently has 34 members. It also has three task forces devoted to maritime security in the Gulf of Oman and Indian Ocean, the Arabian Gulf and the Red Sea and Gulf of Aden, and another for counter-piracy.

In the health sector, India and the US extended their Vaccine Action Programme (VAP) until 2027 to continue joint biomedical research which has already led to the development of vaccines and related technologies. This programme was launched in 1987 to support cooperation in areas such as novel vaccine research and human immunology, and is renewed every five years.

The US will join six of India’s Technology Innovation Hubs to support 25 joint research projects in 2022 in areas such as artificial intelligence and data science that can benefit agriculture, health and climate. The US National Science Foundation and India’s Department of Science and Technology will deepen this cooperation through iCET.

Biden also raised the Ukraine crisis during the meeting and condemned “Russia’s unjustifiable war”. The readout from the White House said the two leaders are committed to continue providing humanitarian assistance and also discussed “how to cooperate to manage disruptions caused by the war in Ukraine”, especially the rise in energy and food prices.

The statement issued by the external affairs ministry contained no reference to Ukraine. The Indian side, in the past, has stopped short of any public criticism of Russia’s action and called for respecting territorial integrity and sovereignty of states. It has also sought an end to hostilities and a return to dialogue and diplomacy.

Ahead of the meeting, Biden told the media he intended to discuss the effects of “Russia’s brutal and unjustified invasion of Ukraine” and its impact on the world order. “The US and India are going to continue consulting closely on how to mitigate these negative effects,” he said.

Rajiv Bhatia, distinguished fellow for foreign policy studies at Gateway House, said the two sides had worked around their differences on issues such as the Ukraine crisis to move forward cooperation in diverse areas. “The two leaders agreed to disagree on Ukraine and then proceeded to deepen bilateral cooperation in sectors ranging from technology to economy and defence. That is happening both bilaterally and in the Quad,” he said.