Heavy rains continued to lash Mumbai on Saturday leading to waterlogging and traffic snarls across the city. Intermittent spells of heavy to very heavy showers are expected throughout the day, India Meteorological Department (IMD) has said. On Friday, at least 11 flights to and from the Mumbai airport were cancelled, however, flight operations are normal as of Saturday morning.Read highlights here:

400 shifted to safer place after waterlogging inside chawl

“400 people, living in a chawl, at KBK Nagar, Shelu (Raigad) have been shifted to a safe place following waterlogging inside their houses creating flood like situation. Adequate police force has been deployed there,” said Public Relations Officer (PRO), Raigad Police. :ANI

“People on the petrol pump roof and in the resort near Kalayan have also been rescued now, said Maharashtra’s Directorate General of Information and Public Relations (DGIPR), Brijesh Singh. :ANI

“On behalf of the Home Minister, I express my gratitude to Railway officers, Defence officials - especially the Air Force officers, and everyone who helped in rescuing the passengers on-board the train,” said Minister of State for Home Affairs, Nityanand Rai on Mahalaxmi Express rescue operation.

900 saved thanks to effective management of PM, HM: Nityanand Rai

“Under guidance of PM, NDRF has made such advancement in its resources that it works successfully in any part of country when a situation arises. 900 people were saved today due to effective management of PM and HM,” Minister of State for Home Affairs, Nityanand Rai, on Mahalaxmi Express rescue operation.

People chest-deep in water in Ulhasnagar of Thane district

People were seen wading through chest-deep water in Ulhasnagar of Thane district. Several parts of the state are flooded due to heavy rainfall. :ANI

Streets in Bhiwandi have been flooded due to heavy rainfall in the region. :ANI 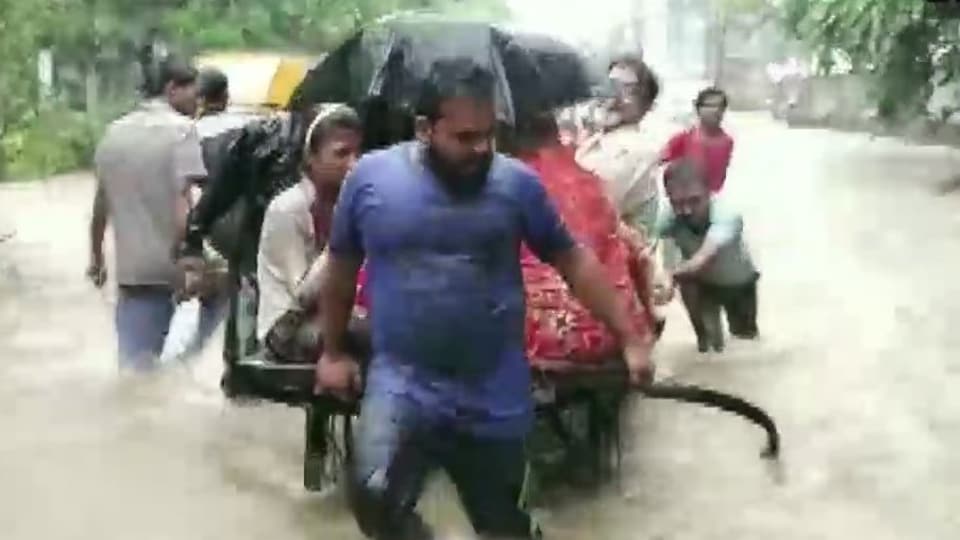 A special train with 19 coaches will leave from Kalyan to Kolhapur with the passengers of Mahalaxmi Express, Central Railways has said.

All passengers aboard Mahalaxmi Express have been rescued safely, Thane district collector Rajesh Narvekar said in a statement.

The passengers are being provided food and medical aid, he added.

There were nine pregnant women in the train who were safely rescued. One of them is admitted to a nearby hospital for check-up.

Maharashtra chief minister Devendra Fadnavis has appealed the citizens stranded in Mahalaxmi Express to not worry and has ensured that all measures to rescue them are taken care of by expert teams from NDRF, Army, Navy, Local administration, Police, and the Railway Ministry.

Over 500 people, including 9 pregnant women, rescued so far

Over 500 passengers, including 9 pregnant women, have been rescued so far by the NDRF teams.

Ambulances with 37 doctors with gynaecologist have been deployed for emergency.

Necessary arrangements like food etc made at Sahyadri Mangal Karayalay.

At least 14 buses and three tempos have been arranged for further movement of passengers.

Arrangements for shelter, food at nearby village

Towards the left of the railway tracks where Mahalaxmi Express is stranded, there is a village where all the rescued passengers are being moved.

Administration has made arrangements for shelter and food, and transport out of there.

Central Railway said that around 500 passengers have been rescued till now.

A woman in D1 coach of the Mahalaxmi Express went into labour while the train is still stranded between Badlapur and Wangani stations. The woman identified as Reshma Kamble was nine months pregnant.

The state disaster management cell said that Kamble has been moved to a nearby hospital.

Seven Navy teams, two helicopters of Indian Airforce, and two Military columns have been deployed for rescue operations along with the local administration.

Two more military columns are on the way.

Situation is under control, the chief minister’s office tweeted.

Maharashtra chief minister Devendra Fadnavis has instructed the Chief Secretary to personally monitor Mahalaxmi Express rescue operations that is stranded with almost 500 people still on-board. At least 217 people have been rescued so far.

Four teams of NDRF have reached and they are evacuating passengers with the help of eight boats, the chief minister’s office tweeted.

Train services on Mumbai-Goa route of Konkan Railway have been halted since 10 am after flood water of a river crossed danger mark and touched a rail bridge.

Rescue ops likely to get over in 2 hours

Two NDRF teams from Pune and two from Mumbai with 45 personnel each are involved in the rescue operations that are likely to finish in two hours.

The rescue teams first evacuated ladies and children from the Mahalaxmi Express. They are now evacuating senior citizens.

At least seven people are being rescued and taken in one boat by two NDRF personnel per boat.

Due to heavy rainfall and overflowing Ulhas river that has caused water logging at Ambernath, 13 trains have been diverted while six have been short-terminated and two have been cancelled, news agency ANI quoted Sunil Udasi, Chief Public Relations Officer, Central Railway as saying.

Of the 700 people on board, 150 have been rescued from Mahalaxmi Express which is stranded between Maharashtra’s Badlapur and Vangani stations owing to flooded tracks, Central Railways said.

As rain continued to lash Mumbai and the surrounding areas for the third consecutive day, tracks between Maharashtra’s Badlapur and Vangani stations are flooded and this stranded the train Mahalaxmi Express with 700 passengers on-board for over 15 hours now, reported news agency IANS.

Landslide at Bhor Ghat between Mumbai and Pune stations

To rescue passengers on board Mahalaxmi Express, in all eight rescue teams from the Navy that include three diving teams have been sent to the spot with rescue material, inflatable boats and life jackets, news agency ANI reported.

A Seaking Helicopter has also been sent with divers for deployment in the area as advance assessment party, according to ANI.

Along with a team of NDRF, a navy chopper has also reached the site for rescue operations where Mahalaxmi Express is stranded with 700 people on board, news agency ANI reported.

An NDRF team and has arrived to rescue passengers on board Mahalaxmi Express, which is stranded between Badlapur and Vangani stations due to flooded rail tracks, reported news agency ANI. 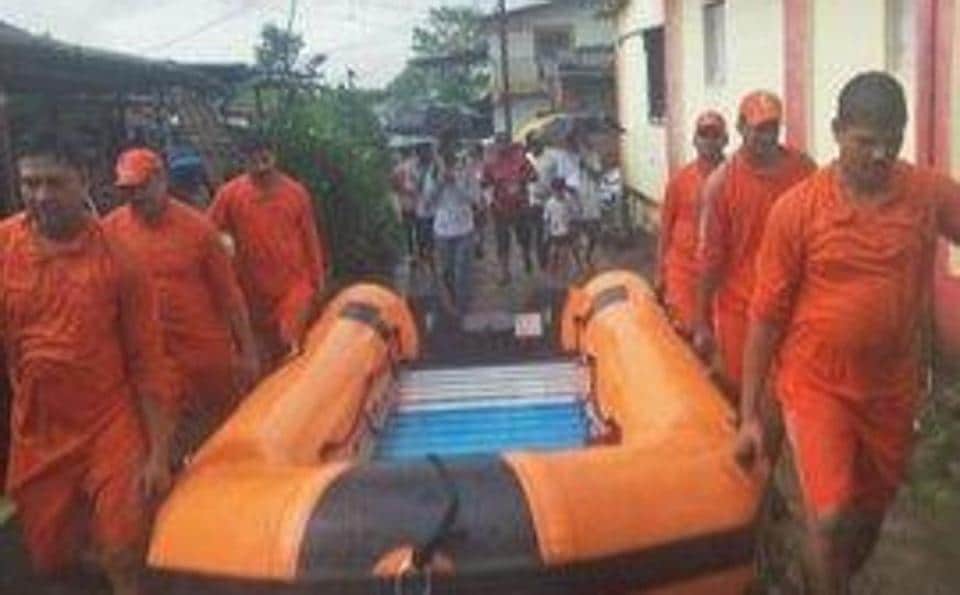 Eight NDRF boats with personnel are only a few hundred metres away from site where Mahalaxmi Express is stranded with 700 passengers on board. The team will shortly reach the train, Central Railways tweeted.

Passengers asked not to step out of stranded train

“We have requested the passengers of Mahalaxmi Express to not get down from train. Train is at a safe place and railway staff, RPF and the city police are present at the location to look after their well-being. Hence we request them to wait for advice from the NDRF and other disaster management authorities,” said Sunil Udasi, chief public relations officer of Central Railway.

The train service between Mumbai’s Kalyan-Karjat-Khopoli have not resumed yet. It was suspended since last night due to flooded tracks between Ambernath to Vangani stations.

Central Railway said that the tracks are still flooded at Vangani though there is no water on tracks at other locations.

Therefore, some outstation trains have been diverted via Karjat-Panvel-Diva alternate route.

Railway Police Force and city police have reached the site where Mahalaxmi Express is held up. They are distributing biscuits and water to the stranded passengers. NDRF team will be reaching in shortly for evacuation , said the Central Railways.

According to the India Meteorological Department, heavy to very heavy rainfall is expected to lash Mumbai through the day.

With around 700 passengers on board, Mahalaxmi Express is held up between Badlapur and Wangni stations near Mumbai. Central Railway has asked for help from local municipal disaster manager cell.

“A team of 40 NDRF personals are reaching the spot with boats and other equipment to rescue the passengers. We have also asked the local civic bodies to send in help,” said Sunil Udasi, chief public relation officer of Central Railways.