Speed breakers in the city have made driving hazardous. What should ideally be a traffic calming measure has become a source of inconvenience for drivers and motorists. Reason: speed breakers have not been designed or constructed as per the Indian Roads Congress (IRC) guidelines.

According to officials, of the at least 2,600 speed breakers in the city, only 10 per cent has been built according to the IRC guidelines.

The Pune Municipal Corporation (PMC) started a survey in the first week of July to identify the speed breakers that have flouted the IRC guidelines. Post survey, the civic authorities will redesign the speed breakers as per the IRC norms.

Aniruddha Pawaskar, chief of road department, PMC said, “It is true that we have not followed IRC norms while constructing speed breakers in the city. However, we intend to rectify the mistake and have already begun the survey to identify speed breakers with faulty designs.”

According to IRC guidelines, a speed breaker should have a radius of 17m with a width of 3.7m and height of 0.1m. It is calculated to reduce the speed of vehicle to 25kmph. Organisations like Central Road Research Institute (CRRI) have also come up with a code for speed breakers at various junctions.

Citizen activist Qaneez Sukharani, who was a part of a panel formed by the civic body to form policy guidelines for speed breakers in the city, said, “This is not the first time when the PMC has promised to rectify defective speed breakers. With these wrong designs the civic body has compromised on the basic safety of residents.”

Sukharani tendered her resignation from the panel in June, stating dithering and delays over discussing and finalising a policy.

According to Sukharani, it is mandatory for the PMC to take a non-objectionable certificate (NOC) from the traffic department before constructing speed breakers. “However, as usual, all the safety norms are trivialised by the civic body,” she said. 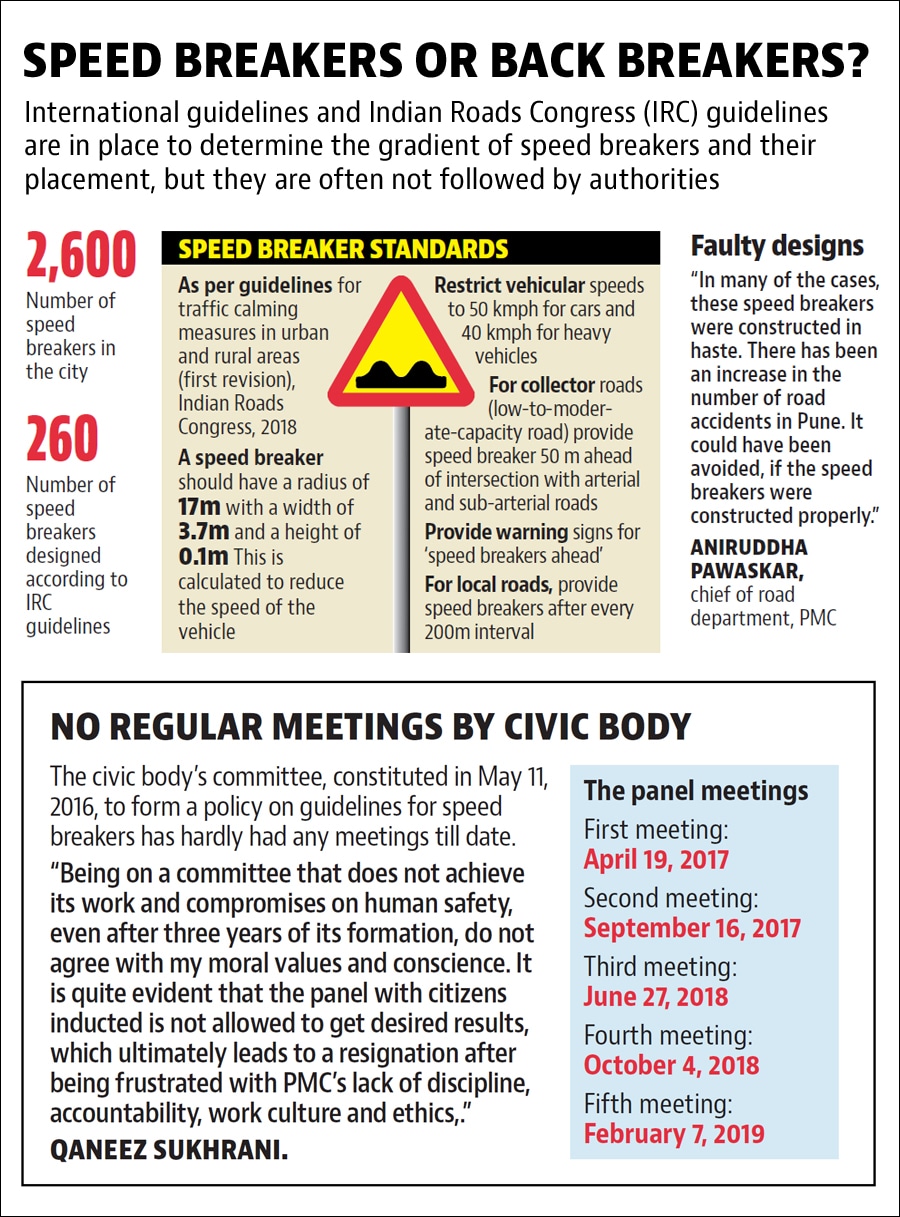 PMC has admitted to violating IRC norms. What do you think needs to be done now?

While it is mandatory to follow the IRC norms while developing roads and speed breakers, violation is a common phenomenon everywhere. One of the basic reasons is that, often, these IRC guidelines are wrongly interpreted. Speed breakers are necessary, but we need to also focus on alternative available solutions to calm traffic.

What are the alternative options to speed breakers?

The focus of every corporation should be of calming traffic. Speed breaker is one solution. However, other options such as speed table, table top crossing, speed bump and hump and chicanes should also be developed as per requirement. We also need to focus on reducing the turning radius. All these options should also be considered before finalising on constructing a speed breaker.

Where should speed breakers be put up?

Speed breakers should be primarily used at signals before the zebra crossings. It should be built on entry gates. Constructing a speed breaker to calm traffic at every location is not the perfect solution.

Your take on PMC’s approach towards speed breaker issue

The civic body is trying to improve the situation, but there is a long way to go. We are still in a better position as we are thinking of street designs. We are pioneers in a lot of works and should take this issue seriously by following IRC norms which will set a paradigm for others to follow. PMC must regularly conduct meetings of the committee constituted for the same.