McCluskieganj: The burden of history

t's a damn fine day in McCluskieganj. The sun is sharp, the breeze is cool, the fish is fresh and the rum has been poured. There isn't much to do but soak in the day, at least for Bryan Mendies.

But you, he says, are not welcome. You from the city, looking for the cliches, seeking the lost romance of being an Anglo Indian in this small, hilly town in Jharkhand.

Originally founded as a 'homeland' for the country's Anglo Indian community, McCluskieganj was once a bustling town of about 400 Anglo-Indian families. Now, it's home to just a handful of them. And those who remain are tired of being treated as "museum exhibits" for the world outside.

That's why "Uncle Bryan" is livid. He knows you will plumb his memories — some happy, some painful — rake up his past, ask questions about his family history and maybe even scratch a wound or two. And for what? Nothing. Not even your company over a drink on a fine afternoon.

The day before, he says, he spoke to someone who is making a documentary on the last few Anglo Indians left in McCluskieganj. And before that too, many journalists and writers visited the town, all in search of the same story.

"And ya' all always write what you want to anyway," he says gruffly. "I don't have time for this."

Bryan moved back home to McCluskieganj after he retired from the Indian Air Force. The house where he now lives is small — enough for an old man and his cook — and stands next to the bungalow where he was born 78 years ago. Living in the bungalow was expensive, especially on a meagre pension. So, like many others in the town, he sold his childhood home.

Dennis Meredith and his daughter, Karen, in front of their house. They prefer not to discuss their past. The same reluctance echoes across the town’s Anglo Indians who says they are tired of being treated as "museum exhibits."

Minutes from Bryan's house are the Merediths — a father and a daughter who insist they would rather be left alone than speak about a bygone era. As we sit down to chat outside his house, a bungalow peeking out from a thick cover of trees, its roof draped in creepers, Dennis Meredith seems rather reluctant to discuss the town's lost splendour, and his own Anglo Indian identity.

"Is there anything left to be said?" he wonders.

The burden of identity

The story of McCluskieganj, and the handful of Anglo Indians who now live there, begins in the 1920s. As India's independence movement gathered storm, the community got jittery.

Since the 18th century, when the British East India Company controlled much of the subcontinent, it was common - and often encouraged - for British soldiers to marry Indian women. There were few English women living in India at the time. The children of these early interracial marriages started off what became a small but significant Anglo Indian community. The British, however, never treated them as equals, and the Indians were suspicious of them.

The closer India got to freedom, the more uncertain their fate seemed.

That's when Ernest Timothy McCluskie, an Anglo Indian from Calcutta, born to an Irish father and an Indian mother, came up with the idea of a "homeland." An astute businessman, he managed to convince Raja Ratu of Chota Nagpur Plateau to lease out 10,000 acres of land, about 62 kilometres from Ranchi.

"The location [McCluskieganj] offered the three Rs essential to McCluskie for the success of his dream — railway, river and road," Malcolm Hourigan, a resident of McCluskieganj, wrote last year on the rise and fall of the town.

Based on McCluskie's plan, a cooperative called "Colonization Society" was formed in 1933. Anglo Indians could buy shares in the cooperative and, in return, get a plot of land. Membership wasn't restricted to British Indians. Even those with French and Portuguese ancestry bought land here.

And they all trooped down to "the Ganj" with much fanfare, bringing along their "pianos, heavy wooden chests, riding breeches, rifles and shotguns."

"However, McCluskie had forgotten one important R — remuneration, or livelihood, which was to be its [town's] nemesis," according to Malcolm.

Malcolm Hourigan, who has written about the rise and fall of McCluskieganj, says the town's founder chose this hilly spot because it was accessible by railway, river and road.

Residents were expected to survive on agriculture: a livelihood that Anglo Indians were neither capable of nor willing to undertake, he says. The crisis of making a living hastened their exit, which, Bryan recalls, started in the late 1940s.

Most families migrated to Canada, Australia and the UK, leaving behind majestic bungalows that now stand cheek-by-jowl with modern construction in McCluskieganj. Many homes, locals say, were sold for a pittance; some were taken over by caretakers after the owners left, never to return.

Despite the exodus, some chose to stay back. Sixty-six-year-old Kitty Texeira, described by a local as the "face of McCluskieganj", is one of those. Kitty was featured on the cover of a book on the town, as well as in several documentaries and newspaper stories on the Ganj. With her graceful demeanor, high cheekbones and fluent English, it's not hard to guess why.

Weary of the intrusive glare on her life and family history, she shares her story only after much cajoling. "When I was young, I couldn't leave because my mother was unwell," she says, explaining why she stayed back. After she married, Kitty says her husband "couldn't" earn so she started selling fruit at the railway station.

Eventually, she sold a part of her house because she needed the money. Now, Kitty lives in the other half with her daughter, granddaughter, her goats and her chickens.

Inside the four high ceilinged rooms of her house, the only signs of her past are a few framed photographs hung on the wall - black and white pictures of her maternal grandfather holding a banjo, of her mother in a dress and a hat, and one of Kitty, her kids and her husband.

But over the years, Kitty's daily anxieties snuffed out her nostalgia. The past does not make for great conversation. "Yes, the town had some celebrations in the run up to New Year's eve," she says. "But people kept to themselves, and I kept to myself."

Kitty Texeira, 66, is among the handful of Anglo Indians who chose to stay back in McCluskieganj. Kitty, as one local puts it, is the "face of McCluskieganj" because she has appeared in several documentaries and newspaper stories about the town.

The same reluctance to share family histories — often complex, and, at times, messy — echoes across families in McCluskieganj. Some even complain of "racism"; of their children being labelled "angrez" despite the fact that they are, in fact, Indian.

Deborah Barrett, a mild-mannered teacher, says she stands out in a crowd because her skin colour clashes with her fluent Hindi and Bengali. "People think we are different," says Deborah, who runs a school in McCluskieganj. "Once a few boys with backpacks landed here and told us, 'Hum Anglo Indian dekhne aayein hain!' What are we, I thought..I mean.. we are just normal people."

The town that was

But McCluskieganj wasn't always home to the rotting grandeur of crumbling bungalows and wary families. There were the "good ol'"days too: feasts with warm stews, delicious pepper water, jalfrezi and the spicy hodge-podge known as junglee pulao; balls and dancing over Christmas and Durga Puja; shops with the best gramophone records or the finest silks from China.

When they warm up, locals such as Ashley Gomes will also recall Dorothy Thipthorpe's jams, jellies and fruit wine that sold beyond the Gunj, and Harris Mendies' legendary hunting trips where he would kill several leopards in a day. Harris is still remembered for his "solid wrists" and his unusual pets — pythons and lizards.

Bryan Mendies, a long-time resident of McCluskieganj, says that despite everything, he can't imagine living anywhere else. “Now I would rather die here," he says.

But only memories persist. The local club, which hosted the Christmas shows and the New Year's eve balls, has closed. Freshly baked breads and steaming stews gave to a less fussy staple: dal bhaat (rice). The "potpourri", a potluck feast in the shade of a banyan tree in Mrs Priscilla Perkins' yard, stopped.

And for Bryan, shopping for Christmas cakes means a trip to Ranchi because the three bakeries run by Anglo Indians have long shut shop.

"The fragrance of the town is now gone," says Gomes, Dorothy's grandson.

The fortunes of McCluskieganj revived in 1997 with the arrival of the Don Bosco Academy. Alfred Rozario, an Anglo Indian living in Patna, started the school to help families in McCluskieganj. Alfred, or Alfie, succeeded by spurring a cottage industry of sorts: most residents now run hostels for students from far-off districts in the state and beyond. At first, only Anglo Indian families were allowed to run hostels. But after a spurt in the student population, others were allowed to do the same.

The school brought the "ghost town", as some locals call it, to life. "It was like a jungle, scary and nothing to do after dark," says Joshy T D, the school's principal. Now, he adds, it's hard to get an appointment with a barber on a Sunday.

Students at the Don Bosco Academy compete in a race. Most of the Ganj's residents now run hostels for students from far-off districts.

But the town still has its failings. "They call it Mini-England, but we don't even have basic facilities such as regular power supply," says Naveen Giri, 29, president of the McCluskieganj youth club. His family runs a grocery store that also sells shrouds, and based on its sales, Giri believes, many tribals are dying. "Nobody cares about this town," he says.

Locals also complain of the lack of a good hospital. "I still have to travel two hours to Ranchi if I need treatment for my sciatica pains," rues Bryan. That's half the problem: it's not easy to get to or from McCluskieganj. There's only one private bus that travels to Ranchi. It takes double the time to go by train. This affects tourism.

Yet the town and its people soldier on. Some such as Malcolm are trying to restore the Anglo Indian cemetery that lies in neglect with unmarked graves and no boundary wall.

For those Anglo Indian families who chose to stay back, however, the charm of a life in this quiet, picturesque town has not faded. After his wife died, Bryan moved to Dehradun to live with his daughter, taking "two truckloads of memories" with him.

"But I came back, he says. "Now I would rather die here." It's not that Bryan likes being by himself — "it gets quite lonely" — or that he doesn't yearn to see his old friends return. 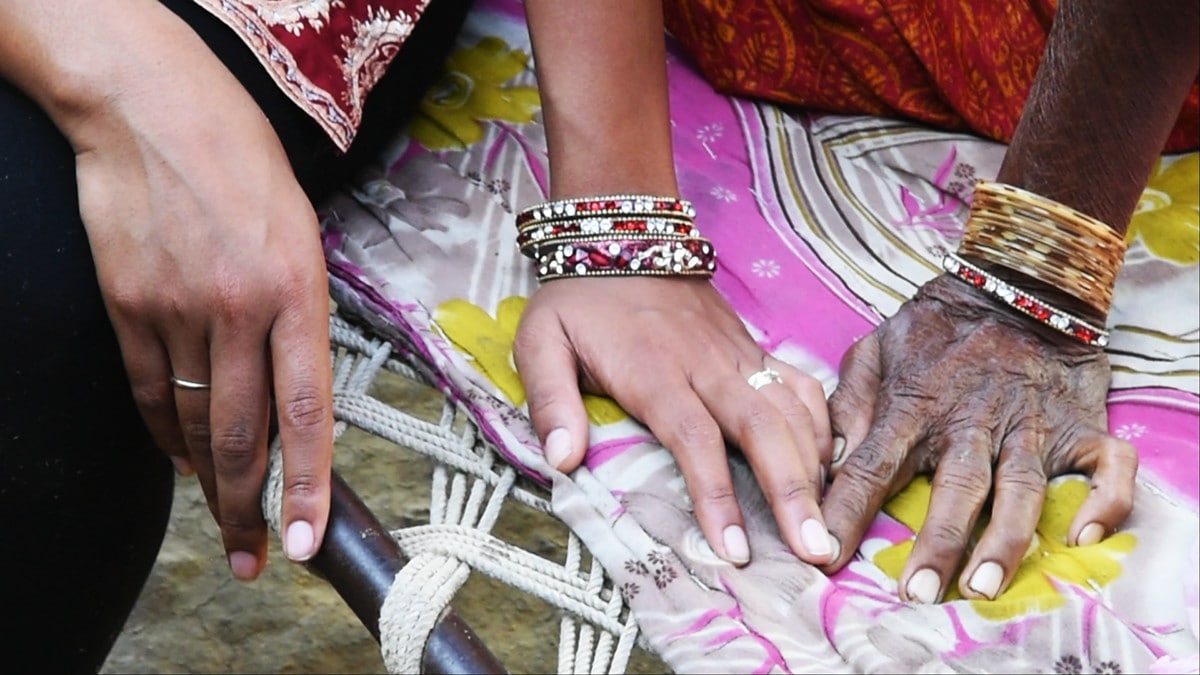