Where dignity does not belong and sexual assault is a way of life.

In night shelters, these women are careful enough to wrap themselves in a dupatta each night. (Photo by Arun Sharma/ Hindustan Times)

Rameshwari, 33, would rather sleep on the roadside than stay in government night shelters, even though she was a victim of robbery and molestation by a cop last month. The mother of three, who has been living on the road side for the last 14 years, approached the Delhi Commission for Women alleging the police constable also stole from two others the same night. The DCW sent a notice to the police seeking action against the cop.

Meanwhile, her neighbour's 12-year-old daughter woke up on the road side last month and realised her clothes were torn. Ashok does not know if she was raped, molested or disrobed. That afternoon, Ashok sent her to a relative reminding himself that a road is no place for a young girl.

But Ramkali says it is it is better to stay on the roads because the shelters hardly protect them from men leering, peeping, stalking, molesting or raping women despite the government claims of building it for the safety of the homeless.

Ramkali is not alone. At least six women told HT they were raped inside shelters in the past six months. At shelters in Connaught Place, Jama Masjid, Karol Bagh and Hazrat Nizamuddin, most minor girls say they are regularly touched by "uncles" living in the men's shelter.

In May, when Delhi Commission for Women chief Swati Maliwal visited a night shelter at Connaught Place, two minor girls told her they were raped. A man from the adjacent men's shelter was arrested.

"When I spent a night with the women there, I realized they are very unsafe. Anyone can walk into a women's shelter while they are sleeping. The entry to the shelter must be restricted. How can they be safe if any outsider can walk inside their shelter?"

UNSAFE AND SLEEPLESS - The woman, who sleeps on the roadside was molested and robbed by a cop. (Photo by Arun Sharma/ Hindustan Times)

KEEPING A WATCH - The 60-year-old does not sleep at night. She stays awake, so that others can sleep. (Photo by Arun Sharma/ Hindustan Times)

There are 197 night shelters across the city. 19 are for women. Five women shelters are permanent structures while the rest are portable cabins of aluminum and steel. The 19 shelters have a combined capacity of 1195. Women say they sleep outside because a portable cabin in summer is unlivable.

When temperatures crossed alarming levels this summer, the DUSIB ordered two air-coolers for each shelter. At least 5 shelters HT visited have not received a desert cooler.

DUSIB Chief VK Jain said following news reports of rape and molestation at shelters, they will approach the Delhi police. "Yes there is a problem at shelters. To address issues, we are meeting police commissioner Alok Verma this week. We will request the police to send a beat constable atleast thrice a day at our shelters to hear complaints and address them daily."

Though men and women sleep in different shelters, the shelters share a compound. DCW chief Maliwal said after her visit to the Bangla Saheb shelter in May, she wrote to the DUSIB to have shelters in different compounds.

"One does not know the identities of the homeless men. They could be drug addicts or those with shady background. Having them in the same compound is a mistake."

Every shelter has a caretaker who maintains entry records but backgrounds are not checked before entry. NGOs managing the shelters cannot refuse accommodation to anyone, according to government rules.

Most women said that nights are especially difficult. "Imagine walking to the toilet and having to pass by a crowd of drunk homeless men smoking outside their shelter. This is what we go through every night," said a woman at a shelter.

At a shelter in Motia Khan near Paharganj, where over 50 families live, women said they complained to the police about men drinking in their compound. But there was no response.

Such lack of security was evident last month, when HT was interviewing women at a Sarai Kale Khan shelter and a drunken home guard barged in. The man had duty of guarding women in late night DTC buses had to be chased away by the caretakers.

THE HORRORS OF THE HOMELESS

The 10-year-old girl has cut her hair short and dresses like a boy. Not because she likes to but because she does not want to be raped again. It's working for her. She feels safe.

In December, she was dragged from her night shelter to shack, beaten up and raped by a 32-year-old man. The man was drunk and high on marijuana, she said.

After raping her, he walked out, only to return the following night. That night, he found another victim.


"When you are homeless, you have to shield your own self. No one will come to rescue you," the 10-year-old told HT.

A day after she was raped, she complained to the other women about her rapist, but no one bothered to do anything.

"No one heard me. His wife was right there, but she could not do anything. My father approached the police only after I insisted. That man came here every night and picked up a woman. Sometimes he picked them up at knifepoint," she added.

The man's wife said, "The poor child scratched him, begged him to let her go, but he gagged her. He thrashed me when I tried to intervene. He raped her in front of me."

HT talked to at least six rape and over 10 molestation victims from road sides and a shelter near the Bangla Saheb gurudwara. The government's claims of safe shelters for the homeless appear to fall flat.

Only two rape victims approached the police. These incidents were reported in the past 6 months.

In February, a woman was raped by the supervisor of a shelter in Jama Masjid area. In September last year, a minor was raped by another homeless in a park near a shelter home in Connaught Place.

Only three cases were reported to the police, while the others remain unheard, ignored and forgotten.

A 13-year-old shares a similar story. She said that though she stays in a women's shelter, her rapist entered the shelter and slept next to her. "Once he asked me to marry him. I told him I am too young. Since then he started stalking me. At night, he slept next to me and touched me inappropriately. I changed my place, but he found me again."

"Once when I was playing with my friends, he came with a blanket, covered me and dragged me to a portable cabin. He tried to kiss me and remove my clothes me but I ran. I did not shout. I knew no one would listen. And I did not want the care taker to throw us out of the shelter. My mother would have killed me," she said.

The alleged rapist, Pamma, women said was a local goon. Women said that till his arrest in May, Pamma and his friends drank outside the shelter and watched women undress.

A woman said, one of Pamma"s friends was caught trying to kidnap her 5-year-old daughter.

"I was sleeping outside the shelter. I felt a hand on my stomach. I thought it was my daughter. When I opened my eyes I saw the man taking my daughter on his shoulder. I raised an alarm. He dropped my daughter and ran away," she said.

The women alleged that when she informed the caretaker, she was told to remain quiet or leave the shelter.


On May 23, when Delhi Commission for Women chairperson Swati Maliwal spent a night at this shelter, a woman and a teenager told her they were raped. Pamma was arrested. His friend - another homeless - has not returned to the shelter.

Some shelters had problems of drugs and women's safety. The Bangla Saheb gurudwara shelter and around 70 others were managed earlier by three security companies as corporate social responsibility initiative. Last year, the DUSIB cancelled the contracts of the three companies following complaints of mismanagement and lack of safety standards.

Women claim that local goons come to visit the shelters and the caretakers have no say, because they are afraid. A 24- year-old woman said that months ago, she was in a bathroom without a latch.

"A man barged inside the bathroom and forced himself on me. He took a video. I told him I was pregnant but he did not listen. He threatened to kick me and kill my child. When I shouted, he pushed me and left."

She alleged that the same night, the man came back with two men and a woman who threatened to kill her unborn. "They threatened to sell me to a man she knew in Saudi Arabia."

The woman claimed that when she complained to a beat constable, the cop laughed. That evening, she saw the cop smoking with the man.

"Police started taking our complaints only after Swati Maliwal visited the shelter. Pamma was arrested but the others are still absconding. They had raped a 15-year-old at knife point inside the toilet," she said.

A caretaker at the women's shelter said that they request men not to enter the shelter or stop peeping at women inside.

The registers appeared to be maintained shoddily and most toilets were without a latch. NGOs have appointed caretakers at each shelter, but there are no security guards.

"I tie my daughter's arm to mine with a dupatta every night because I fear that someone may pick her up," Mehrunissa, another woman said.

"When I go to the toilet, I take her with me I get up every five minutes to check her. Such is the fear. Do we not deserve to sleep peacefully?"

(names have been changed to protect identity) 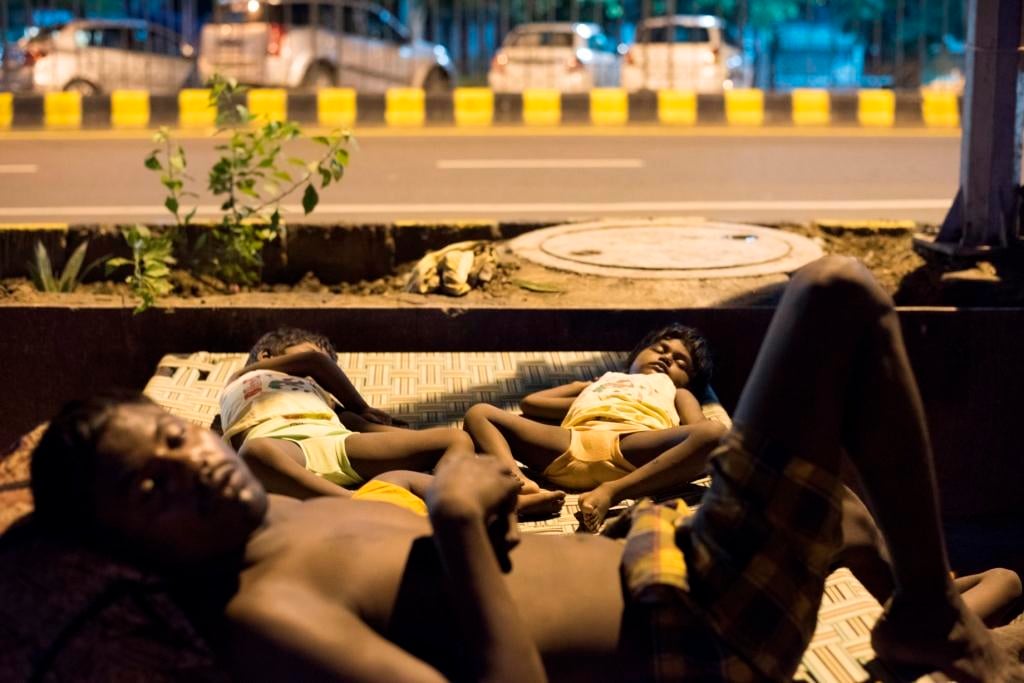