By Pankaj Jaiswal and KumKum Dasgupta

It was late evening. Chotepur village in poll-bound Uttar Pradesh’s Banda district was packing up for the day but a few residents were still on the banks of the Ken – the village’s lifeline – to discuss India’s first river linking programme, the Ken-Betwa project, and their future.

“I heard that the government is planning to divert water from Ken to Betwa in Madhya Pradesh. Is this true?” Atiq Sheikh, a 36-year-old daily wage labourer, asked his neighbour Indresh Manjhi.

“I heard about it at the collectorate,” said the 65-year-old Manjhi, the village’s resident poet and a marginal farmer. “If this happens, we will die of thirst and hunger. As it is, illegal sand mining has changed Ken’s course and destroyed its banks where we grow watermelon, muskmelon and cucumber.”

Manjhi, 65 lives in Chotepur on the banks of the Ken. He says the river linking will lead to a dearth of water resources in area. (Vipin Kumar / Hindustan Times)

As the country’s most populous state gets into campaign-mode for the 2017 assembly polls, illegal sand mining and the Ken-Betwa project are bound to figure prominently on the agenda of political rivals – If not for the merits of the project, then surely for the controversies swirling around it.

On July 28, the Allahabad High Court stopped sand mining and directed the CBI to investigate the illegal business in the state. In September, chief minister Akhilesh Yadav sacked state mining minister Gayatri Prajapati over allegations of his involvement in illegal mining.

Chotepur’s residents allege all political parties and local policemen were involved in illegal sand mining and their rapacious practices not only destroyed the ecology but the mafia had stopped their access to the river.

“The court stopped sand mining but we have a new problem,” Sheikh added angrily. “No one told us about the Ken-Betwa project. But then who cares about us?”

A man walks over truck tire tracks on Ken's rich river bed. Plagued by illegal sand mining, locals allege that the involvement of the local authorities has only destroyed the ecology. (Vipin Kumar / Hindustan Times)

The linking project envisages diversion of surplus water from Ken basin to water-deficit Betwa basin. The idea was first mooted in 1982 but the real push came during the Vajpayee government, which planned to connect 14 Himalayan and 16 peninsular rivers by 30 canals and 3,000 reservoirs to irrigate 87 million hectares of land and produce 34 gigawatt of hydroelectricity.

A MoU was signed in 2005 between the Centre and the two states to start work on the project. The Ken-Betwa link is now Union water resources minister and Jhansi MP Uma Bharti’s dream project.

According to the National Water Development Agency, the project will provide irrigation, domestic and industrial water supply and power to Chhatarpur, Panna and Tikamgarh (MP) and Mahoba, Jhansi and Banda (UP).

These six districts and seven others in the two states form the Bundelkhand region, which has been drought-hit for the last six years. Estimated to cost Rs 7,615 crore, the project has got clearance from the National Board for Wildlife and is awaiting environmental clearance.

There are several criticisms of the project: First, Ken is not water surplus. “Ken is not a perennial river and so does not have excess water and the threat of flooding, which the government is using as a ruse, is only there for three months during peak rainy seasons,” explained Ashish Sagar, a Banda-based activist.

He alleged that the BJP is pushing this project because it wants to get Rajput and Kshatriya votes of Jhansi by promising drinking water. Uma Bharti is a Lodh Rajput.

Second, the river flows 60 to 70 feet lower than the Betwa and at least 30% of the 78 MW that would be generated by the proposed hydro- project would be used for pumping the water up.

Third, India does not need so much hydropower. “India is planning to add 1 lakh MW of solar power. Where is the need for additional hydro-power at huge environmental and social costs?” asked Manoj Misra, who heads the Yamuna Jiye Abhiyaan.

Fourth, the tiger lobby is opposing it because it will submerge 10% of the Panna Tiger Reserve (Ken flows through it) to build the Daudhan Dam on Ken, which will divert the water.

“There is a functional British-era dam at Daudhan. Why do we need another?” asked Sagar. For the BJP, however, the river linking programme will be a big election promise.

On October 24, Prime Minister Narendra Modi started the campaign in Banda’s neighbouring Mahoba district where he complimented Uma Bharti for her interest in the project and said it will end water crisis in the region.

Ashish Sagar, a Banda-based activist, alleges that the BJP is pushing for the link to be completed to gain votes in the Jhansi area. (Vipin Kumar / Hindustan Times)

The SP has been quiet since Mulayam Singh Yadav was the CM in 2005 when the MoU was signed. The BSP has objected to the grand plan.

But the strongest opposition could come from the Congress. Former Jhansi Congress MP Pradeep Jain told HT that the BJP and SP are sowing the seeds of another Cauvery-type dispute in Bundelkhand.

“The two states have a 40:60 water-sharing agreement in the Rajghat dam project. A Rs 300 crore canal was made to channel UP's share of water from the dam, which is in MP. But MP closed the canal and diverted water to its farmers,” he alleged. “But the SP is quiet on this.”

He also alleged that the Ken-Betwa link is being pushed to serve Tikamgarh (Uma Bharti’s birthplace) and Chattarpur districts of MP, but not UP.

“The UP region of Bundelkhand is simmering against the BJP. No wonder that Modi chose to start the campaign from here,” the Congress leader added.

More in this series

Saving the Ganga is not an election issue in UP 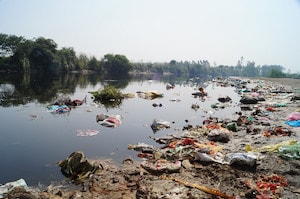 Once a lifeline of Western Uttar Pradesh, Hindon is now a dead river. The dying Sai clamours for attention 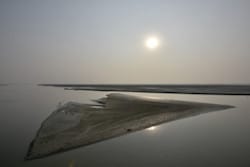 When the river runs wild: UP counts the cost of turbulent Ghaghra