The early years of India’s Parliament

The first two decades in the Lok Sabha and Rajya Sabha saw fruitful and deliberative discussions, in line with the high bar set by the Constituent Assembly. Some of the issues raised and precedent set continue to be relevant and important.

In May 1952, Members of Parliament (MPs) of the first Lok Sabha assembled to elect its Speaker.

The Congress candidate was GV Mavalankar, who had been in the Speaker’s chair since 1946. Opposing him was Shankar Shantaram More, a newcomer to Parliament. The election was a formality as Congress had a comfortable majority in Lok Sabha. More voted for Mavalankar and said, “In the best traditions of Parliament, a gracious custom prevails by which where two candidates are proposed for the Speakership, each candidate votes for the other candidate. l have observed that custom by voting for you.’

Mavalankar was aware of the historic responsibility cast upon him as the first Speaker of our new republic. Replying to the welcome speeches from MPs, he observed, “Parliamentary life has only recently begun in our land and it is yet a tender plant that requires delicate and careful handling — and if I may say so, careful nursing. It is, therefore, the special responsibility of this Parliament to set up sound and healthy traditions, as, whatever we do now, is more likely to be a precedent for all times to come.” 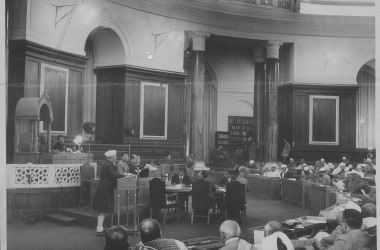 The Constituent Assembly would meet in what is now the Central Hall to draft the Constitution. HT Archive

The evolution of modern legislative institutions in India has an interesting history.

The increasing demand for self-government by Indian leaders necessitated the creation of a bicameral national legislature in 1919. This pre-independence institution had limited powers to hold the colonial administration accountable. It was more a forum for criticising the government and highlighting its shortcomings. This bicameral legislature stopped functioning when the country became independent, and the Constituent Assembly became the legislature for India.

The Assembly then had two choices — to act as a constitution-framing and a law-making body or to separate these roles.

On August 29 1947, the Constituent Assembly opted to divide these functions. It resolved that “The business of the Assembly as a Constitution-making body should be clearly distinguished from its normal business as the Dominion Legislature, and different days or separate sittings on the same day should be set apart for the two kinds of business.”

The Constituent Assembly met in its legislative role for the first time in November 1947. It was also a time of misery in the country. Partition had resulted in an influx of refugees, and the nation’s capital and surrounding areas witnessed large-scale riots.

During this time, Mahatma Gandhi came to Delhi with his message for communal harmony. In January of 1948, he decided to go on a fast unto death to contain the violence. Gandhi’s fourth son Devadas was then the editor of the Hindustan Times. The paper reported that the Mahatma’s decision came “as a complete surprise to his colleagues and the members of the Government”. On January 30 1948, Nathuram Godse assassinated Mahatma Gandhi.

The Constituent Assembly (Legislative) was in session that month, and when it convened on February 2, members paid moving tributes to the father of the nation. Speaker Mavalankar started the day’s proceedings by stating, “We are meeting today under the shadow of a double calamity, the sad demise of the tallest leader of our age who has led us from slavery to independence and the reappearance of the cult of political violence in our country.” The Assembly stood silently for a minute when the tributes ended and then adjourned without conducting business.

The Assembly met in its dual roles from the end of 1947 to 1949. In 1948, both avatars of the Assembly met for 104 days. And a year later, members of the Assembly spent roughly six months in Delhi attending its deliberations. During their time in the national capital, most stayed in refurbished armed forces barracks not far from Parliament. American troops stationed in Delhi during the second world war had occupied them earlier. The complex was renamed Constitution House and became the hub of political activity. Assembly members discussed legislative matters in its dining halls, and the Congress party often used to hold its meetings in the complex.

After the Constitution started working, the courts began comprehensively interpreting the chapter on fundamental rights. These decisions were related to freedom of speech and the citizen’s right to carry out any profession. Courts had also struck down zamindari abolition legislation made by state legislatures.

In this background, Prime Minister Nehru introduced the first constitutional amendment bill. With this amendment, the government wanted to limit free speech in the interests of the security of the State, friendly relations with foreign states, public order, decency or morality. It was apprehensive that even though the constitutional provisions gave it the leeway for any schemes of nationalisation, “it was desirable to place the matter beyond doubt by a clarification...” It also wanted to pre-empt any legal challenges towards its attempts to uplift backward classes on the ground that they were discriminatory. And finally, the amendment created a list of laws immune from judicial scrutiny. The bill met with scathing criticism in the provisional Parliament.

Syama Prasad Mookerjee led the opposition to the amendment. In his speech, he said, “By appealing to the emotions of the Prime Minister I was appealing to all the Members of this House warning them that we are today being asked for the first time to amend our sacred Constitution. It is a great document. It is not a matter which you can take in a light-hearted way. We are anxious — no matter what our individual views may be on various matters — to retain the foundation of a good and solid Government which can work in the interest of all sections of the people of this country. That I certainly believe is the objective of all of us. Now, if we proceed in a light-hearted way to amend the Constitution, naturaly we create a precedent which may lead to very serious consequences. These things, taken each one of them separately, may not mean much. But after all if you take them as a whole and the manner in which you are proceeding, you are doing a great disservice. If there is anything standing in your way you just come and amend the Constitution, utterly ignoring public opinion.”

The amendment would eventually pass, and the country would head into its first general elections a few months later, ending the provisional Parliament’s term.

The Indian electorate would elect MPs, and the first House of the People would start functioning in the summer of 1952.

Data from the parliament secretariat shows that this first directly elected House was a mix of youth and experience. Forty-five per cent of MPs were below the age of 45, and the House’s average age was a little over that. It had 35% lawyers and 22% who identified themselves as agriculturists.

The newly elected House did not have its own rules — therefore, Speaker Mavalankar would modify and adopt the procedures of the Constituent Assembly Legislative for its functioning. Initially, the Speaker made changes to the rules and then a committee of MPs was made responsible for it. The two Houses would also stop referring to themselves by their English names in the Constitution, House of the People and Council of States. In 1954, the Hindi terms Lok Sabha and Rajya Sabha came into use. A new republic would need laws for the different challenges that it would encounter. And to deliberate on these laws and question the Government, both the first and second Lok Sabha would set a scorching pace of functioning.

The directly elected House would average 133 days in its first five years and 115 in the next five. Both these Lok Sabhas passed almost 700 laws during these 10 years. And it was during the term of the second Lok Sabha, that the two Houses disagreed on the provisions of the Dowry Prohibition Bill. It led to the first joint meeting of the two Houses to break the deadlock.

During this time, there were also disagreements between the Government and Parliament. When the Government promulgated multiple ordinances [laws signed by the President], Mavalankar reminded Nehru about the role of the first Lok Sabha in establishing traditions. He said, “…we, as first Lok Sabha, carry a responsibility of laying down traditions. It is not a question of present personnel in the Government but a question of precedents; and if this Ordinance issuing is not limited by convention, only to extreme and very urgent cases, the result may be that, in future, the Government may go on issuing Ordinances giving the Lok Sabha no option, but to rubber-stamp the Ordinances.”

MPs would use parliamentary tools effectively. During the first Lok Sabha, seven bills brought by MPs who were not ministers became laws. One was a legal proposal piloted by Rae Bareli MP Feroze Gandhi. In addition to his parliamentary responsibilities, he was managing associated with the newspapers National Herald and Navjivan. His bill sought immunity from civil and criminal lawsuits for anyone publishing an accurate account of parliamentary proceedings.

In another celebrated case, in the second Lok Sabha, Congress MPs would use question hour to unearth a financial scam involving the Life Insurance Corporation. Called the Mundhra scam, it would lead to the resignation of Finance Minister T T Krishnamachari. This episode would restore some of the damage done by an MP of the Provincial Parliament, who had accepted money for asking questions.

During the first ten years of Parliament, the debate in the two houses was passionate and mostly decorous. And when things started getting out of hand, the presiding officers would restore order.

In 1957, after an acrimonious debate in Rajya Sabha, certain proceedings of the House had to be deleted, the first Chairman of Rajya Sabha observed, “We want to maintain the good name and dignity of this House. Every one of us is interested in that as much as I am. I do not want it to be said that sometimes these discussions suggest that we are not behaving like serious, responsible Members of Parliament but rather like irresponsible professional agitators. That impression even all members of this House to whatever side they may belong, should avoid. We must be careful and preserve our good name and our dignity.”

It was not only the deliberations in the two Houses that kept MPs busy. In the first two terms of Lok Sabha, several international dignitaries addressed them in the Central Hall. The first one was US Vice President Richard Nixon in 1953. President Dwight D. Eisenhower would engage with MPs at the same venue six years later. Nikita Khrushchev of the USSR would come twice in different capacities.

The first decade of Parliament would set the bar high for future Lok Sabhas. Some of the issues raised and the precedent set are important even now, 70 years later.

(Chaksu Roy is the head of legislative and civic engagement, PRS Legislative Research. The views expressed are personal.)