The Indian and Pakistani armies announced on Thursday that they had begun strictly adhering to a ceasefire along the Line of Control (LoC) in Jammu and Kashmir from the midnight of February 24 – the apparent outcome of behind-the-scenes contacts between senior security officials of the two countries.

A joint statement issued by the two armies said the move followed a discussion between India’s Director General of Military Operations (DGMO), Lt Gen Paramjit Singh Sangha, and his Pakistani counterpart, Maj Gen Nauman Zakaria, over their established telephone hotline. People familiar with developments said on condition of anonymity that the DGMOs spoke on February 22.

Pakistan Prime Minister Imran Khan’s key adviser on security affairs, Moeed Yusuf, said in an audio statement issued to journalists in Islamabad that the agreement on the ceasefire was the outcome of “behind-the-scenes” contacts and “more roads will open” in the future. Yusuf didn’t elaborate on the nature of these contacts.

The move comes at a time when the Indian military is largely focused on the standoff with China in the Ladakh sector of the Line of Actual Control (LAC), which emerged in the open in May last year, though there has been no let-up in counterterrorism operations in Jammu and Kashmir.

During their discussion on the hotline, the two DGMOs “reviewed the situation along the Line of Control and all other sectors in a free, frank and cordial atmosphere”, the joint statement said.

India and Pakistan had agreed to a ceasefire on the LoC in November 2003. Though the truce largely held over the years, it came under strain after bilateral ties hit a low following the Pulwama suicide attack in February 2019 and India’s decision to scrap Jammu and Kashmir’s special status in August 2019, and troops from the two sides regularly traded fire.

The DGMOs also “agreed to address each other’s core issues and concerns which have propensity to disturb peace and lead to violence” in the interest of “achieving mutually beneficial and sustainable peace along the borders”. The two sides added that existing mechanisms of hotline contact and border flag meetings will be used to “resolve any unforeseen situation or misunderstanding”. 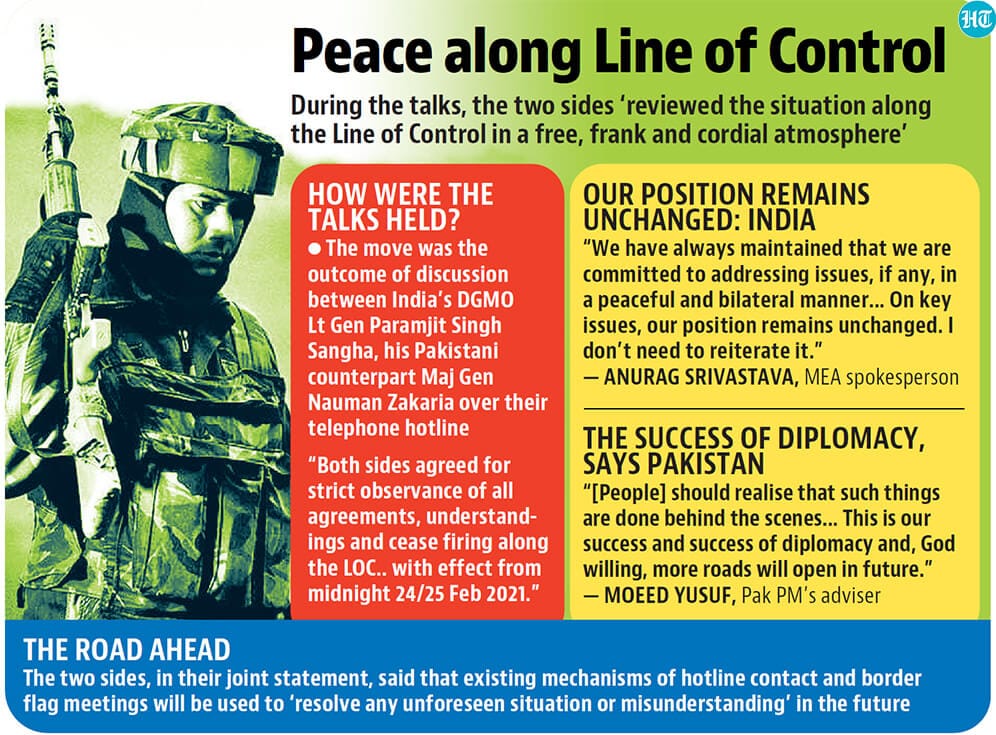 External affairs ministry spokesperson Anurag Srivastava told a regular news briefing that the ceasefire agreement didn’t amount to a change of India’s position on key issues related to Pakistan. He didn’t respond to questions on back-channel contacts or the possibility of talks. “India desires normal neighbourly relations with Pakistan. We have always maintained that we are committed to addressing issues, if any, in a peaceful and bilateral manner,” he said.

People familiar with developments said on condition of anonymity that the established convention of weekly contacts between officials of the Directorate General of Military Operations of the two countries had continued in recent months despite periodic flare-ups along the LoC. The DGMOs speak on the hotline when there is a specific request from either side, the people added.

The people said that while the Indian side had agreed to the ceasefire, there was no question of lowering the guard when it came to operations to counter infiltration along the LoC or terrorism within Jammu and Kashmir. There will also be no reduction of forces along the LoC and troops will remain prepared to deal with all contingencies, the people said.

“The main idea is to have peace along the LoC so that the local population doesn’t suffer,” said one of the people cited above.

The people expressed cautious optimism about the development but said the cross-border infiltration of terrorists and attacks by Pakistan-based terror groups such as Jaish-e-Mohammed and Lashkar-e-Taiba continued to be key concerns.

Moeed Yusuf, who holds the post of special assistant to the Pakistan premier on national security and strategic policy planning, said in his audio statement that the ceasefire agreement was a positive development that should be welcomed.

“So when people ask what is the [Pakistan] government’s policy and what is it doing on Kashmir, and nothing is happening, they should realise that such things are done behind the scenes. Lots of effort is being made,” Yusuf said, speaking in Urdu.

“This is our success and the success of diplomacy and, God willing, more roads will open in the future,” he said.

Yusuf contended that the joint statement was a “victory for Pakistan” as India was not agreeing to a ceasefire. Pakistan, he said, was “repeatedly saying that we want peace and we want that there should be a ceasefire at the LoC” so that innocent civilians aren’t killed.

People familiar with developments in Islamabad said Yusuf has been playing a key role in efforts to foster a rapprochement with India and his work has the backing of the powerful military, including Pakistan Army chief Gen Qamar Bajwa.