IMR is the number of children dying before the age of one for every 1,000 live births and is considered to be a crude indicator of the health scenario of a country.
Share Via
Copy Link
New Delhi | ByAnonna Dutt

Delhi’s infant mortality rate (IMR) went down by two points to 16 in 2017 compared to the year before, making it the state with second-lowest infant mortality among states with a population of 10 million or more, according to a bulletin of Sample Registration System (SRS) data. The city shares the second spot with Tamil Nadu, which also recorded an IMR of 16.

IMR is the number of children dying before the age of one for every 1,000 live births and is considered to be a crude indicator of the health scenario of a country.

The overall IMR of the country was 33 in 2017, one point less than the year before. Among the five big states with the lowest IMR in 2017, only Delhi showed a two-point decline over the previous year — Tamil Nadu showed a decline of one point, with the other three showing no decline. 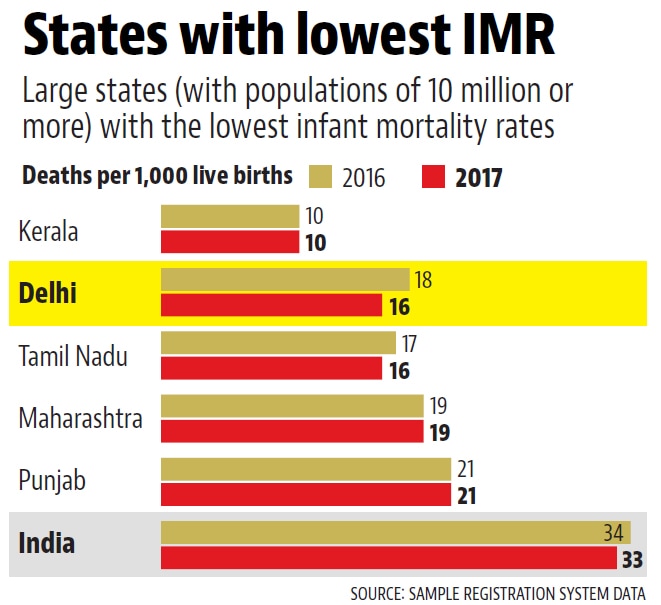 Officials said the data suggests that the decline in Delhi is mainly due to healthcare interventions.

“Between 2013 and 2017, there has been a 33% decline. This is incredible. If you look at the data for immunisation coverage in the same period, it has gone up from 55% to 92% under the intensified Mission Indradhanush,” said a senior official from Delhi government’s health department, on condition of anonymity.

“Better socio-economic status of the people, better healthcare facilities, improved immunisation coverage, and more vaccines, all contribute to a declining infant mortality rate over time. What we need to look at is whether the rate of decline has gone up. And, if there has been an eight-point decline over five years, the average is 1.6 point decline a year, so a two-point decline in 2017 is not really a jump. Yet, it is good that Delhi’s IMR is much less than the national average, again mainly because the determinants of decline in mortality are better in Delhi, which is an urban centre with better access to healthcare,” said Dr Ramesh Agarwal, professor of paediatrics at All India Institute of Medical Sciences (AIIMS).

The SRS data, which is collected in a survey, reported lower infant mortality for Delhi as compared to the data from Civil Registration System, which was reported in the recently released Annual Report on Registration of Births and Deaths. The report put Delhi’s mortality rate at 20.83.

“For Delhi-centric measurements, the SRS data is more accurate as the survey is conducted in Delhi households and the result is then extrapolated for the population. In the civil registration system, any deaths in Delhi hospitals get recorded, including those of children from the neighbouring states,” said another official from Delhi’s health department, on condition of anonymity.