Three out of the four states going to polls; Assam, West Bengal and Kerala are also the top three states by share of Muslims in the population. With 26.7% Muslims and 16.6% Christians, Kerala has the lowest share of Hindus -- to be sure, they are still a majority – among India’s important states.

The Election Commission of India (ECI) on February 26 announced the schedule of assembly elections in four states – Assam, Kerala, Tamil Nadu and West Bengal – and the union territory of Puducherry. These polls will be held from March 27 to April 29 in eight phases. The results of the elections will be declared on May 2. Here are five charts which explain the forthcoming contest.

Three out of the four states going to polls; Assam, West Bengal and Kerala are also the top three states by share of Muslims in the population. With 26.7% Muslims and 16.6% Christians, Kerala has the lowest share of Hindus -- to be sure, they are still a majority – among India’s important states. In terms of social composition, Other Backward Classes (OBCs) have a much bigger share in the southern states than West Bengal and Assam. While more than a third of West Bengal’s population is made up of Scheduled Castes (SCs), Scheduled Tribes (STs) have at least a 15% share in Assam’s population.

Can the BJP finally make inroads on the east coast?

The Bharatiya Janata Party (BJP) has gained a foothold, even captured power in many new regions after its 2014 success. India’s north-eastern states and Haryana are the biggest examples of this. However, one region where the BJP has still not been able to achieve success at the level of assemblies is India’s eastern coast. From West Bengal to Tamil Nadu, the BJP’s seat share in assemblies is among the lowest in India. After having won more than 40% vote share in the 2019 Lok Sabha elections in West Bengal and stitched an alliance with the ruling All India Anna Dravida Munnetra Kazhagam (AIADMK) in Tamil Nadu, the BJP is hoping to capture power on the eastern coast for the first time. 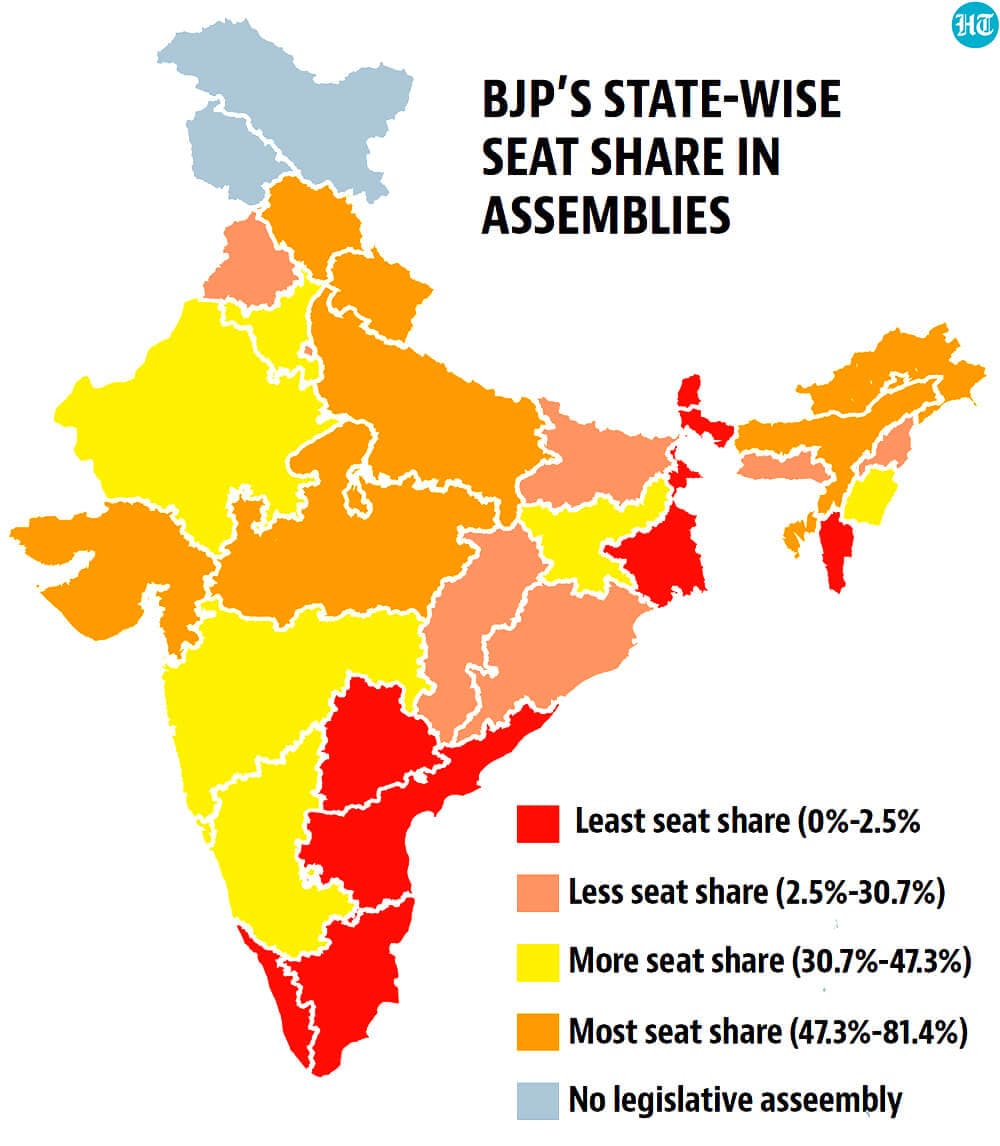 Kerala, Tamil Nadu and Assam are very crucial for the Congress

The states of Kerala, Tamil Nadu and Assam account for 13% out of the 543 seats in Lok Sabha. However, these three states accounted for 50% in the 52 Lok Sabha seats the Congress won in the 2019 elections. This one statistic captures the importance of this election cycle for the Congress. While the Congress is a junior partner of the Dravida Munnetra Kazhagam (DMK) in Tamil Nadu, it is the leader of the United Democratic Front (UDF) in Kerala and is allying for the first time with the All-India United Democratic Front (AIUDF), a party with mostly Muslim supporters, in Assam. The Assam alliance is a calculated risk as it could alienate the non-Muslim supporters of the Congress. A simple addition of Congress and AIUDF vote shares since 2014 Lok Sabha elections shows that its reach has anyway been coming down.

Can the DMK and AITC retain their dominant regional party positions?

One of the defining features of post-2014 politics in India has been the decline of Congress, Left parties and Mandal based formation in the states of Uttar Pradesh and Bihar. West Bengal and Tamil Nadu have emerged as an important source of anti-BJP MPs in the Lok Sabha. DMK and the All India Trinamool Congress (AITC) are the biggest parties after the Congress which consistently oppose the BJP in the parliament. Their combined strength of 45 is just seven less than that of the Congress. While the AITC suffered serious reverses in the 2019 Lok Sabha elections – its seat tally came down from 34 to 22 – the DMK led alliance swept Tamil Nadu winning 38 out of the 39 seats. Their performance in these elections will have important implications for their status not just in the states but also in national politics.

It is do or die for the CPI (M) in Kerala

If the Communist Party of India (Marxist) or the CPI(M) led Left Democratic Front (LDF) fails to retain the state of Kerala, it will mark a new low in the Left’s declining fortunes in Indian politics. Ever since it captured power in West Bengal in 1977, the CPI(M) has always led a state government in West Bengal, Kerala and Tripura since then. With the CPI(M) staring at irrelevance in West Bengal and marginalisation in Tripura, Kerala is the only bastion left. To be sure, Kerala has alternated between the LDF and UDF since 1980. The LDF’s rout in the 2019 Lok Sabha elections -- it won just one of the 20 Lok Sabha seats -- suggested an imminent defeat for the CPI (M) in 2021. However, a bounce-back in the local body polls held in December 2020 have raised the CPI (M)’s hopes about its chances.