Lok Sabha elections 2019: Four different scenarios predict victory for NDA; over to May 23

The exit polls, however, differed on the numbers, and the range hovered from a high of 314 for the Bharatiya Janata Party (BJP) to a low of 202. For the Congress, the numbers ranged from a low of 46 seats to a high of 107.
Share Via
Copy Link
Hindustan Times, New Delhi | ByHT Correspondent

They, however, differed on the numbers, and the range hovered from a high of 316 for the Bharatiya Janata Party (BJP) to a low of 202. For the Congress, the numbers ranged from a low of 46 seats to a high of 107. 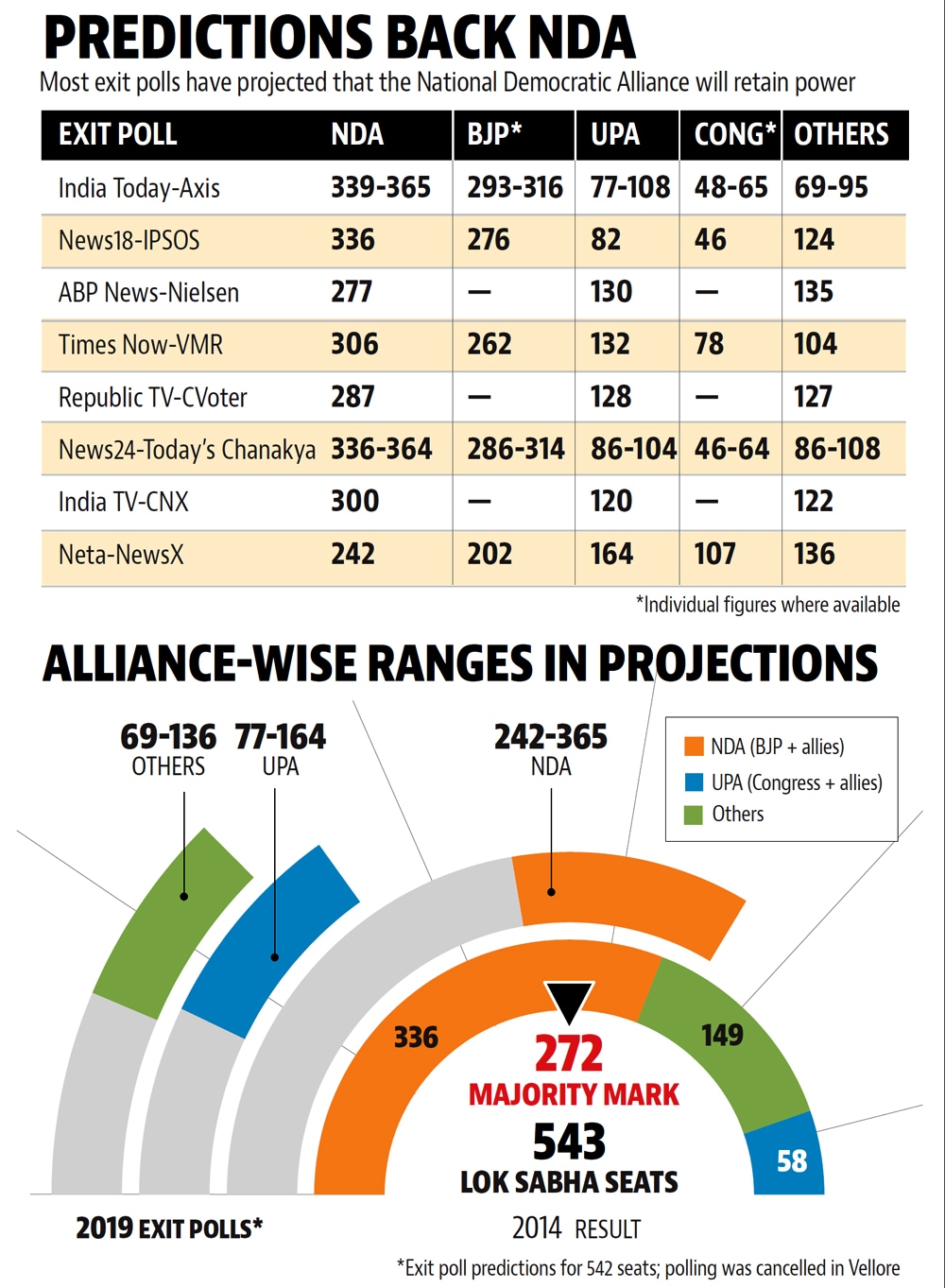 A caveat is essential here. These are exit polls, and exit polls have had a history of being inaccurate in terms of exact seat predictions. HT did not commission an independent exit poll, had no access to raw data, and cannot verify the methodological rigour and results of the separate polls. HT has also not attempted a poll of polls since that is not possible without having access to the methodology, sample representativeness, and raw data of all existing polls before drawing an overall conclusion.

But if the exit poll numbers are credible, they throw up four different scenarios.

The first is of Modi’s return as PM with the BJP having a majority on its own and National Democratic Alliance (NDA) allies supplementing its strength in Parliament.

It predicts that the United Progressive Alliance (UPA) would get 82 seats, with the Congress at 46 seats, just two more than what the party won in 2014. The India TV-CNX poll has given the NDA 300 seats.

The second is of Modi coming back as PM with the BJP as the single largest party and the NDA winning a majority. The Republic-CVoter poll has predicted such an outcome, giving the NDA 287 seats. The Times Now-VMR poll has given NDA 306 and 262 to the BJP. The ABP News-Nielsen poll has given the NDA a total of 277 seats. It predicts 130 seats for the UPA and others at 135 seats.

The third scenario is of the BJP as the single largest party comfortably above 200 seats and the NDA as the single largest pre-poll formation, but at less than 272 seats — this would still take Modi to within striking distance of a majority but open up the space for potential allies to negotiate on their terms. None of the polls predict specifically such a scenario, although some are in the vicinity.

And the fourth is of the BJP as the single largest party but at around 200 seats, making a second term for Modi difficult and opening the doors for a broad Opposition alliance anchored, but not necessarily led, by the Congress. The NewsX-Neta poll has given NDA 242 seats, with BJP at 202 seats; it predicts 164 seats for the UPA and 43 seats for the Mahagathbandhan of Samajwadi Party(SP)-Bahujan Samaj Party (BSP)-Rashtriya Lok Dal (RLD) in Uttar Pradesh. It leaves the possibility of the UPA, the SP-BSP-RLD alliance, the Trinamool Congress, and the YSR Congress and the Telangana Rashtra Samithi to come together to cross the majority mark.

The poll outcomes brought cheer to the BJP camp, and party leaders claimed it was a vindication of Narendra Modi’s popularity. When contacted, Union minister Prakash Javadekar said the polls were a reflection of the BJP’s popularity. “The exit polls are showing a return of the BJP. The exact polls will give [us] a much better majority. We will improve on our tally of 2014,” he said.

The BJP won 282 seats in the Lok Sabha in 2014, becoming the first party in 30 years to clinch a majority on its own.

The Congress did not buy the exit poll numbers. “Having waited for almost seven weeks, let us wait for May 23 for the final result. Exit polls have gone notoriously wrong in the past. As far as the error of these polls is concerned, one fundamental error is to give so many seats in saturation states to the BJP, which, according to me, is contrary to all logic,” said senior Congress leader Abhishek Singhvi.

Regional leaders, too, expressed their apprehension about the poll numbers. “I don’t trust Exit Poll gossip. The game plan is to manipulate or replace thousands of EVMs [electronic voting machines] through this gossip. I appeal to all Opposition parties to be united, strong and bold. We will fight this battle together,” West Bengal CM Mamata Banerjee tweeted.

Most polls which predict a comfortable majority for NDA have assumed an outright sweep for the BJP in most of the northern, central and western states where the party did well in 2014 . In most of these states — Gujarat, Rajasthan, Maharashtra, Madhya Pradesh, Chhattisgarh, Himachal Pradesh, Uttarakhand, Haryana — the Congress is the BJP’s principal challenger. If the numbers come true, they would indicate that the Congress has been unable to translate the success of the state assembly elections at the end of last year into gains. The only region where the Congress has outperformed the BJP is south India, according to the exit polls.

The most striking, and sometimes divergent projections, come from the state of Uttar Pradesh and West Bengal. In the former, the BJP is battling to minimise its losses in the face of a strong opposition in the form of the SP-BSP-RLD alliance. The ABP-Nielsen poll gave the opposition alliance 45 seats, while giving the BJP 22 seats. In contrast, the India Today-Axis poll has given BJP 62 to 68 seats in UP, while giving the SP-BSP-RLD 10 to 16 seats.

In West Bengal, where the BJP is seeking to wrest seats from a strong and aggressive incumbent, Mamata Banerjee, polls seem to agree that the saffron party will make gains. While ABP-Nielsen has given BJP 16 seats, a gain of 14 seats from 2014, the India Today-Axis poll has given it 19-23 seats in the state.

Commenting on both the reliability of the numbers and what they mean, Milan Vaishnav of the Carnegie Endowment for International Peace said, “With the caveat that exit polls have had a chequered past in India, these numbers are very good news for PM Modi and the BJP. If the results on Thursday mirror the exit polls, it will represent a massive blow to the Opposition, which has struggled to halt the BJP juggernaut. The Congress had few illusions of moving well beyond 100 seats, but it had hoped to keep the BJP below 200, thereby raising the prospects of a Modi-less government.”