Mira Rajput has said that she first met husband Shahid Kapoor eight years ago, when she was just 16.

Actor Shahid Kapoor may have surprised everyone n 2015 with his sudden wedding announcement with Delhi girl Mira Rajput but, for them, their relationship was not so out of the blue. It emerges that the two met years ago.

In a recent chat with her fans on Instagram, Mira revealed details about the first time they met each other. And unlike what everyone thought so far, they actually met long ago, when she was just 16. “What was it like meeting Shahid for the first time? Considering he is a star,” a fan asked her.

Grateful for the year that made us complete ✨ Happy New Year

“Just like meeting anyone for the first time. Interesting. It was actually when I was 16 and we were at a common family friends house for a concert by a sufi singer. Both our dad’s love that kind of music,” Mira replied. Shahid and Mira tired the knot in 2015 when she was 21. They welcomed their first child, daughter Misha in 2016 and their second child, son Zain was born last year. 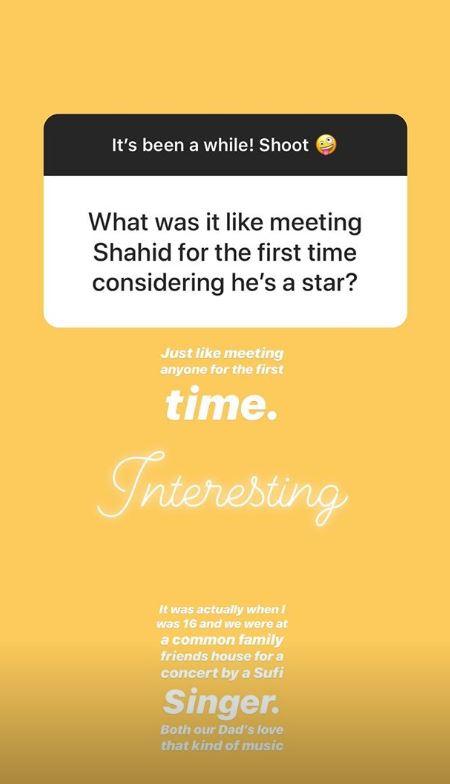 When asked about how Mira took up the mantle of motherhood at such a young age, Shahid said in an interview to Filmfare, “My understanding of her is that she is very mature, deep down. Otherwise she would not have been able to deal with all that has happened with her life. I mean she was just turning 21 when we got married.” The interviewer called Shahid a ‘cradle snatcher’ and the actor agreed. “Absolutely! You know, I am. I can’t runaway from it. So it is what it is,” he said.

Mira and Shahid were seen together at a restaurant in Mumbai with film director Abhishek Kapoor and his wife Pragya on Monday night for dinner. Mira was seen in a white shirt and black skirt while Shahid was seen in a blue sweatshirt.

Shahid was last seen in Batti Gul Meter Chaalu, which failed at the box office. He will now be seen in Kabir Singh with Kiara Advani. It is the remake of hit Telugu movie, Arjun Reddy.