The 76th annual Golden Globe Awards were held in honour of the best films and television of 2018. The yearly ceremony is considered a lighter and less solemn precursor to the Oscars, and was held in Beverly Hills on Monday morning.This year’s event was hosted by actors Andy Samberg and Sandra Oh, who took over from 2018 host, comedian Seth Meyers. Oh joined a small group of actors who have won awards in the same ceremony which they hosted.The Globes this year pulled a twist at the end of the ceremony, with Green Book and Bohemian Rhapsody staging upset wins. Green Book finished with three awards - the most for the evening - and was followed by the Queen biopic and Alfonso Cuaron’s Roma, with two each. Lady Gaga and Bradley Cooper, considered by many as the favourites to win, went home empty handed. The Christian Bale-starrer political drama, Vice, directed by Adam McKay, led with six nominations, followed by Bradley Cooper’s directorial debut, A Star is Born, Yorgos Lanthimos’ period dark comedy, The Favourite, and the road trip drama, Green Book, with five nods each. Marvel’s Black Panther is the first superhero movie to be nominated for best picture, in addition to scoring two other nominations.Bale won the Best Actor (Musical or Comedy) award for Vice, while Rami Malek won the Best Actor (Drama) award for Bohemian Rhapsody.The television category was lead by FX and Ryan Murphy’s The Assassination of Gianni Versace: American Crime Story, with four nominations. Seven shows follow on the heels of ACS, with three nods each. These include Barry, Homecoming, The Marvellous Mrs Maisel and Sharp Objects. Crucially, The Handmaid’s Tale, last year’s winner of the top TV prize - best drama series - has been largely snubbed. This year’s ceremony will also be missing older heavyweights such as Stranger Things and Game of Thrones.Versace won the TV drama award, while Mrs Maisel took home the comedy Globe.Here are the highlights from the Golden Globes Awards

After that twist ending, here is a full list of winners at the 2019 Golden Globes. You can check it out here.

Bohemian Rhapsody concluded A Star is Born’s massive snub with a surprise Best Picture win. As with Green Book, Twitter is already questioning the HFPA’s decision to award the highest honour to a film directed by Bryan Singer, who has been accused of sexually harassing young boys.

A perfect #GoldenGlobes cheese sandwich: best pictures, BOHEMIAN RHAPSODY and GREEN BOOK. Proving that it’s not how to make it, it’s your good intentions that matter.

congrats to BOHEMIAN RHAPSODY, the first film to ever win a golden globe without actually having a director

well, the Oscar voters sure have a chance to prove how much smarter they are, now!

BOHEMIAN RHAPSODY is possibly the worst thing to ever win a thing. #GoldenGlobes

Rami Malek has pulled off Bohemian Rhapsody’s only win so far, with a Best Actor award for his lead performance in the Freddi Mercury biopic. The film attracted controversy after director Bryan Singer was fired midway through production, and was replaced by Dexter Fletcher.

While the reviews have been mixed, Bohemian Rhapsody has gone on to become the highest grossing musical biopic of all time, with over $700 million in the bank. “Thank you to Freddie Mercury for giving me the joy of a lifetime. I love you, you beautiful man,” Malek said in his speech.

Glenn Close is the surprise winner in the Best Motion Picture Drama category, beating out hot favourite Lady Gaga. Other nominees include Nicole Kidman, Melissa McCarthy and Rosamund Pike. Close reacted in shock when her name was announced, and thanked Gaga on her way to the podium.

“We have to find personal fulfillment. We have to follow our dreams. We have to say ‘I can do that. And I should be allowed to do that,” she said in her acceptance speech.

Director Peter Farrelly’s race-related road trip drama, Green Book, has won the Golden Globe for Best Picture Musical or Comedy, beating out the likes of Vice, Crazy Rich Asians, Mary Poppins Returns and The Favourite. Controversy has already erupted online, after what is being seen as a controversial decision by the HFPA.

The timeline about to go off. #GoldenGlobes

Best Actress in a Motion Picture Musical or Comedy

Olivia Colman wins the Best Actress in a Motion Picture (Musical or Comedy) award for her performance in Greek filmmaker Yorgos Lanthimos’ period dark comedy, The Favourite. The film also stars Rachel Weisz and Emma Stone, whom she addressed as ‘my b*tches’ in her acceptance speech.

Colman will next go on to play the lead role in Netflix’s The Crown, taking over from Claire Foy.

Best Television Limited Series or Motion Picture Made for Television

Prolific producer Ryan Murphy’s FX drama, The Assassination of Gianni Versace has won the Golden Globe for Best TV Limited Series. It is the second installment in Murphy’s American Crime Story anthology series, and is based on the serial killer Andrew Cunanan’s murder spree in the ‘90s. Star Darren Criss has already won the Globe for his performance as Cunanan.

Rachel Brosnahan picks up her second Golden Globe award for her lead role in Amazon Prime Video’s period comedy-drama, The Marvellous Mrs Maisel. “Thank you to our incredible village that it really takes to make this show, and our village is a matriarchy led by Amy Sherman-Palladino,” she said.

Netflix’s The Kominsky Method wins the Globe for best comedy series. Michael Douglas has already won a Globe for his performance in the show, which also stars Alan Arkin.

Alfonso Cuaron wins for his semi-autobiographical drama, Roma. The film is set in 1970s Mexico City, and based on Cuaron’s childhood memories. 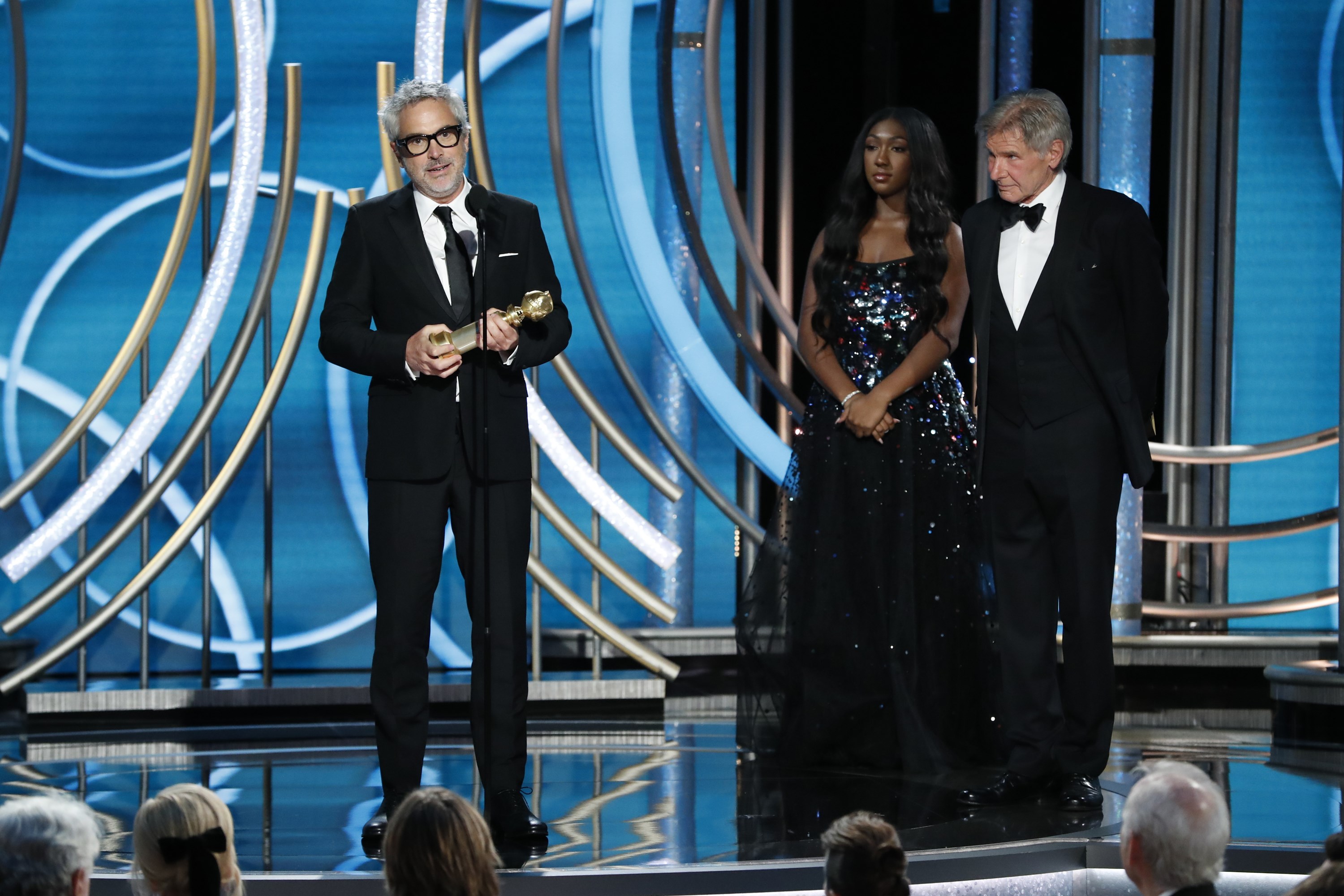 This is the Mexican filmmaker’s second Golden Globe, after having won for his 2013 space adventure, Gravity. “Another part of me is telling me, in reality – this film was directed by Libo (the person on whom it is based). My mother, and my family,” he said in his acceptance speech. “This film would not have been possible without the specific colours that made me who I am. Gracias familia, gracias Mexico.”

Star of classics such as The Big Lebowski, and this year’s Bad Times at the El Royale, Jeff Bridges, has been presented with the annual Cecil B DeMille award.

“If I’m lucky, I’ll be associated with The Dude for the rest of my life,” he said in his acceptance speech about his evergreen character from The Big Lebowski.

Best Actor in a Limited Series or TV Movie

Breakout star Darren Criss has won the Best Actor in a Limited Series or TV Movie Golden Globe for his performance as the psychopathic Andrew Cunanan in the second season of the FX anthology, The Assassination of Gianni Versace.

Director Alfonso Cuaron’s black and white drama, Roma, has won the Best Foreign Language film award. The film has been a favourite in the category ever since its win at the Venice Film Festival. Read Hindustan Times’ five-star review here.

Best Actor in a Motion Picture Musical or Comedy; Best Supporting Actress in a Series, Limited Series or TV Movie

Christian Bale has won the Best Actor award for his performance in director Adam McKay’s political comedy-drama, Vice.The film is an unconventional biopic of former US vice president Dick Cheney. This is Bale’s second Golden Globe from three nominations. He previously won for The Fighter. “Thank you to Satan for giving me inspiration on how to play this role,” Bale said during his acceptance speech.

Patricia Clarkson, always the favourite, has won the Best Supporting Actor for her performance in HBO’s Sharp Objects.

Best Performance by an Actor in a Supporting Role in any Motion Picture, Best Screenplay 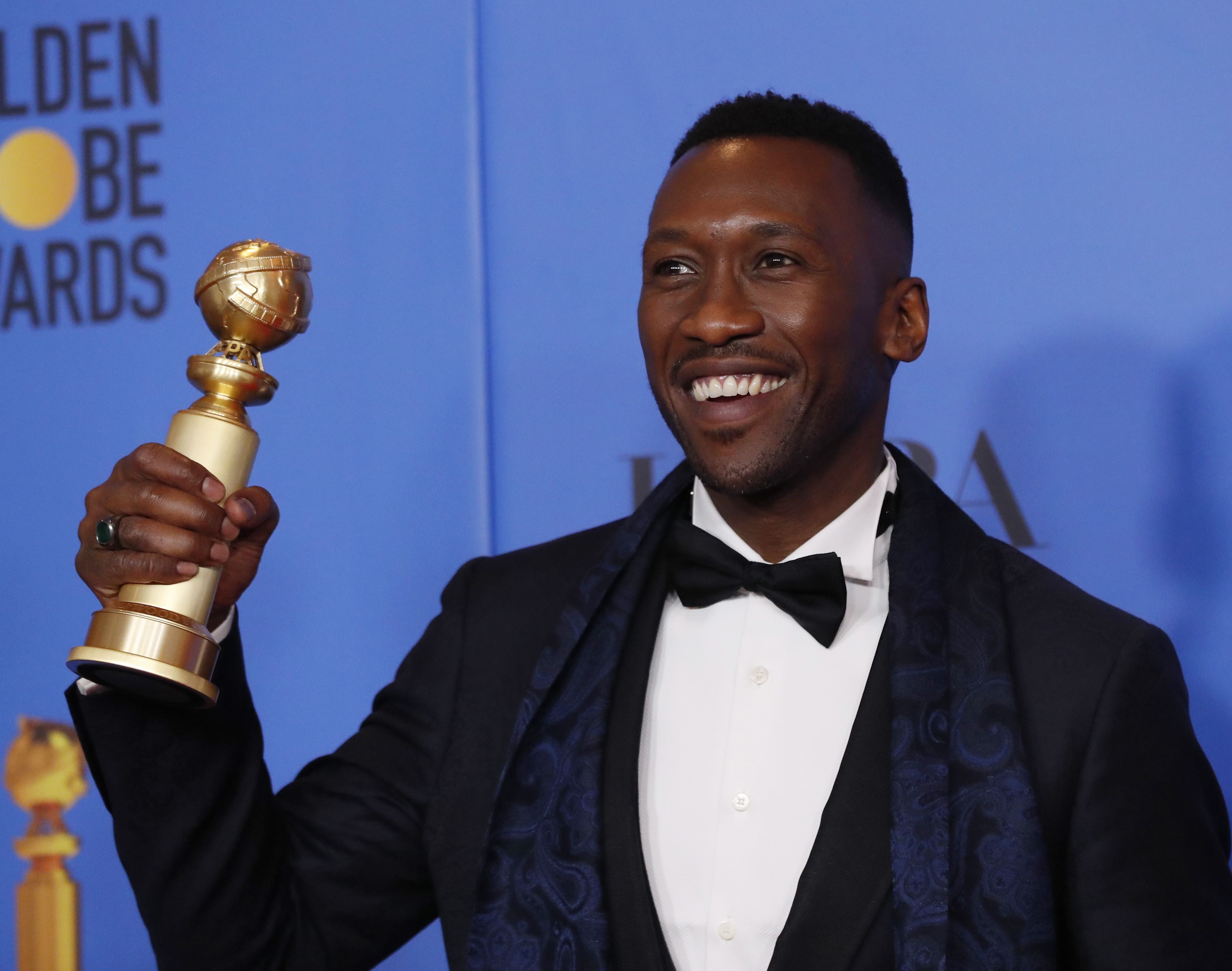 Green Book has also won the Best Screenplay award. The film has been written by Nick Vallelonga, Brian Currie and Peter Farrelly.

Regina King has won the Best Supporting Actress Golden Globe for her performance in director Barry Jenkins’ If Beale Street Could Talk. “I challenge anyone out there who is in a position of power...to challenge yourselves and do the same,” she said in her acceptance speech. 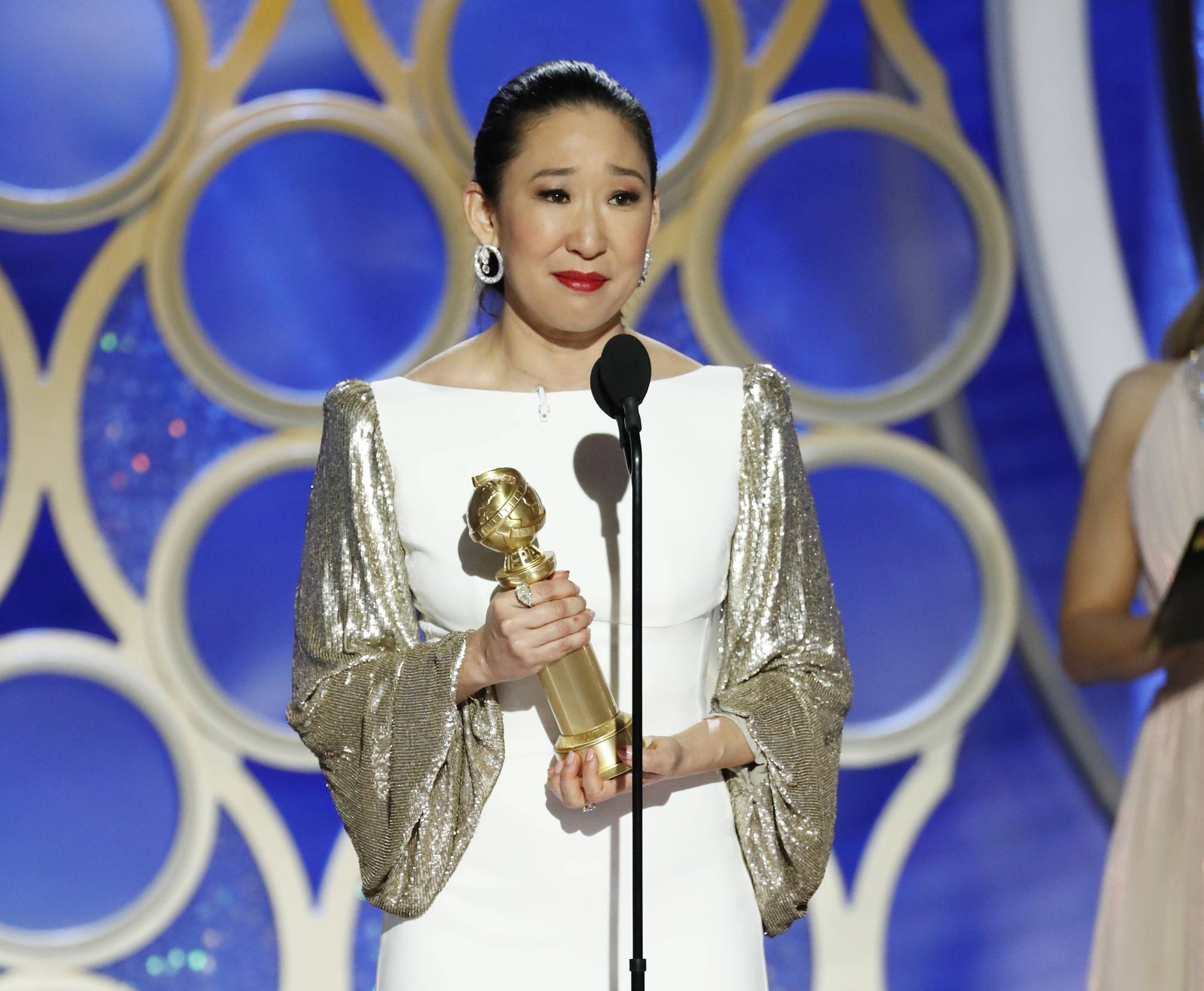 Justin Hurwitz wins Best Original Score for Damien Chazelle’s Neil Armstrong biopic, First Man. Hurwitz previously won the Globe for his La La Land score. Lady Gaga’s powerful song from A Star is Born, Shallow, wins the Best Original Song. Gaga was visibly teary when her name was announced, and broke into song on stage. “As a woman in music, it is really hard to be taken seriously as a musician and songwriter and these 3 incredible men lifted me up, supported me,” she said about her co-songwriters.

The Hollywood Foreign Press Association presented its inaugural Carol Burnett Award - the television equivalent of the Cecil B DeMille award for films - to Carol Burnett.

Congratulations to Carol Burnett - Recipient of the inaugural Carol Burnett Award to recognize a lifetime achievement in Television - #GoldenGlobes pic.twitter.com/wty7hQHCiY

Paddington and James Bond star Ben Whishaw has won the Golden Globe for Best Supporting Actor in a Series, Limited Series or TV Movie, for his performance in A Very English Scandal, which also starred Hugh Grant. Patricia Arquette, former Oscar-winner for Boyhood, has won the Best Actress in a Limited Series or TV Movie for her performance in Escape at Dannemora, the Showtime series directed by Ben Stiller.

Former Game of Thrones star, Richard Madden, picks up the big award for his performance in the hit thriller series, Bodyguard. Television’s biggest award, the Best Drama Series, goes to FX’s The American’s which aired its final season this year.

Michael Douglas picks up the first Golden Globe of the evening for his performance in Netflix’s The Kominsky Method. Spider-Man: Into the Spider-Verse, the critically acclaimed superhero film, has won the Best Animated Feature award. According to Entertainment Weekly, 75% of films that have won in the animated film category at the Globes have won at the Oscars.

Hosts Andy Samberg and Sandra Oh kick off the ceremony 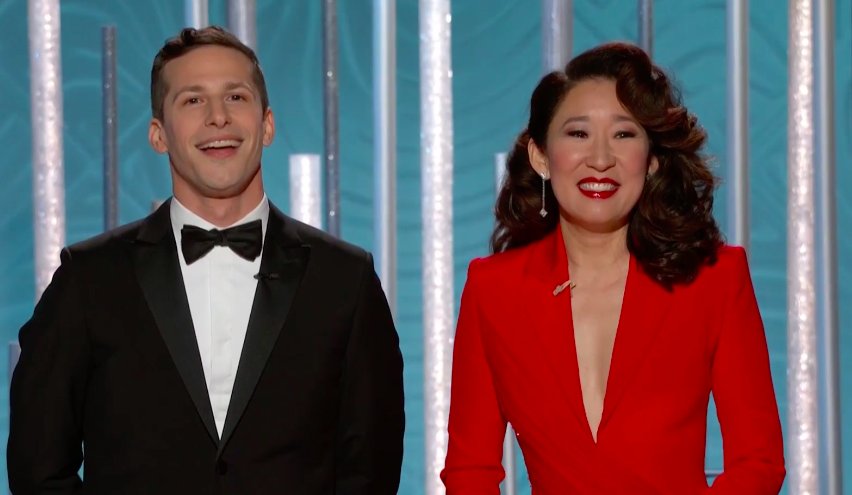 Hosts for the evening, Andy Samberg and Sandra Oh, set the tone for the show - a mock ‘roast’ which was really a celebration of those in attendance. “You fools are all about to get roasted Gervais-style,” Samberg said, before looking at Spike Lee and saying, “Lifetime fan, can’t wait to see what you do next!”

Taking a dig at representation, Oh said, “Crazy Rich Asians is the first film with an Asian-American lead since Ghost in the Shell and Aloha,” - both films were accused of whitewashing lead roles.

Where can you watch the Golden Globes 2019?

You can watch the ceremony in India on Colors Infinity, Colors Infinity HD and Comedy Central. The telecast will be deferred live by an hour, and will begin at 7:30 am on Monday, followed by a repeat telecast at 9 pm. There is no dedicated live-stream available, but you can watch on live TV apps.

Catch up on all the nominees

Ahead of the 2019 Golden Globes, catch up with all the nominees in the major categories - from Christian Bale in Vice to Bradley Cooper and Lady Gaga in A Star is Born. You can check out the full list of nominees here.

The hour-long red carpet event has kicked off, ahead of the Golden Globes 2019 ceremony. Check out some pictures here. 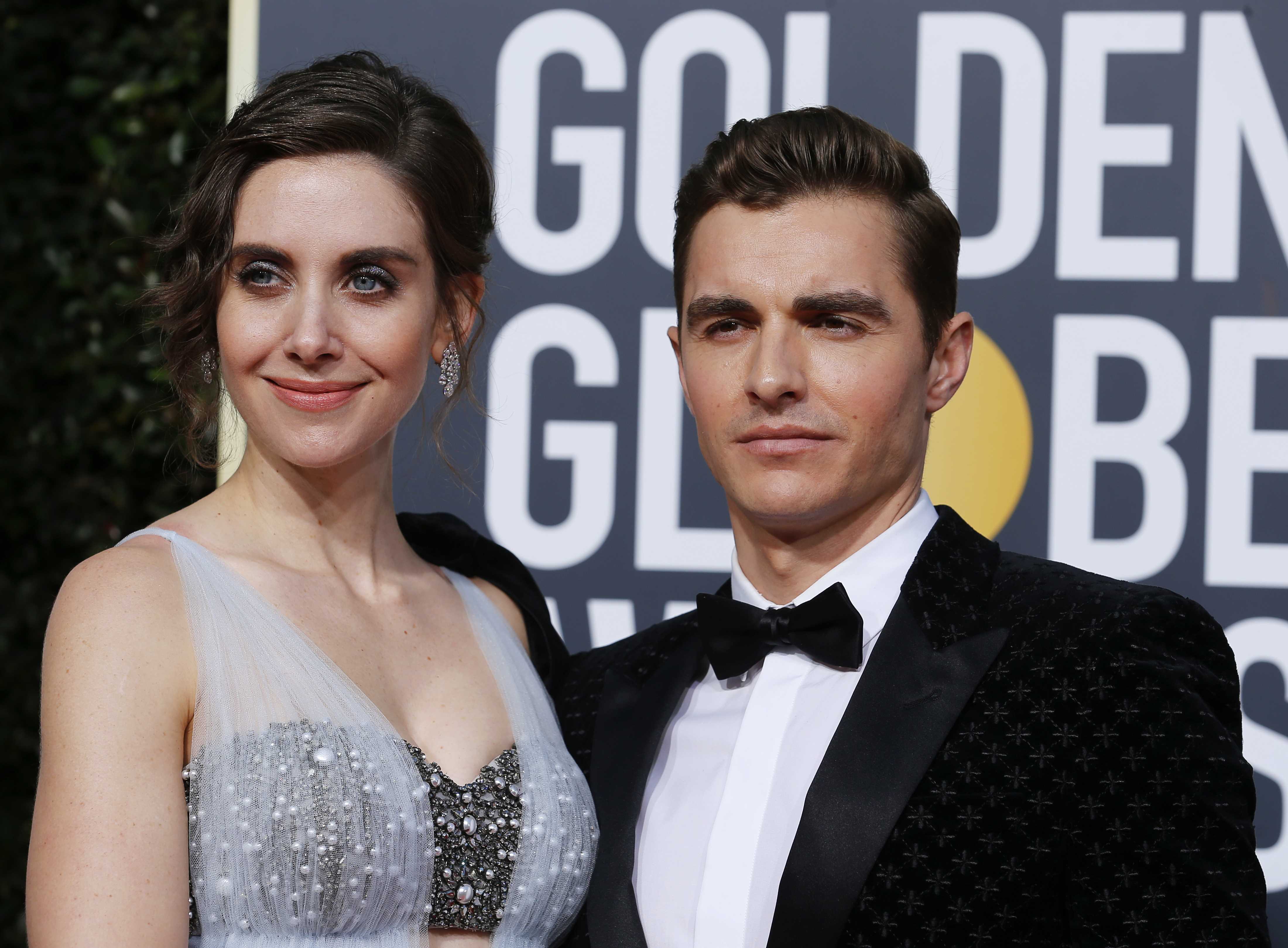 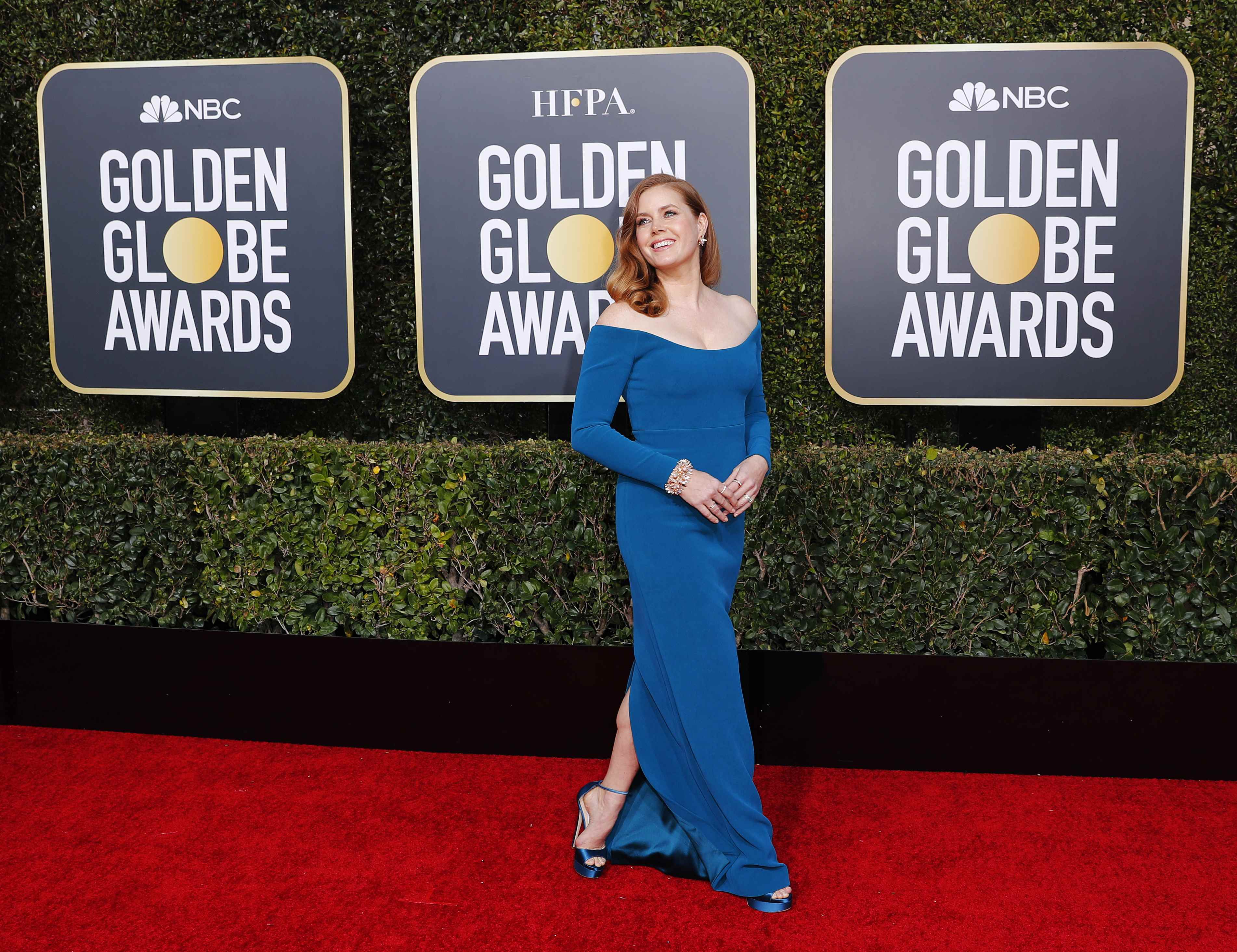 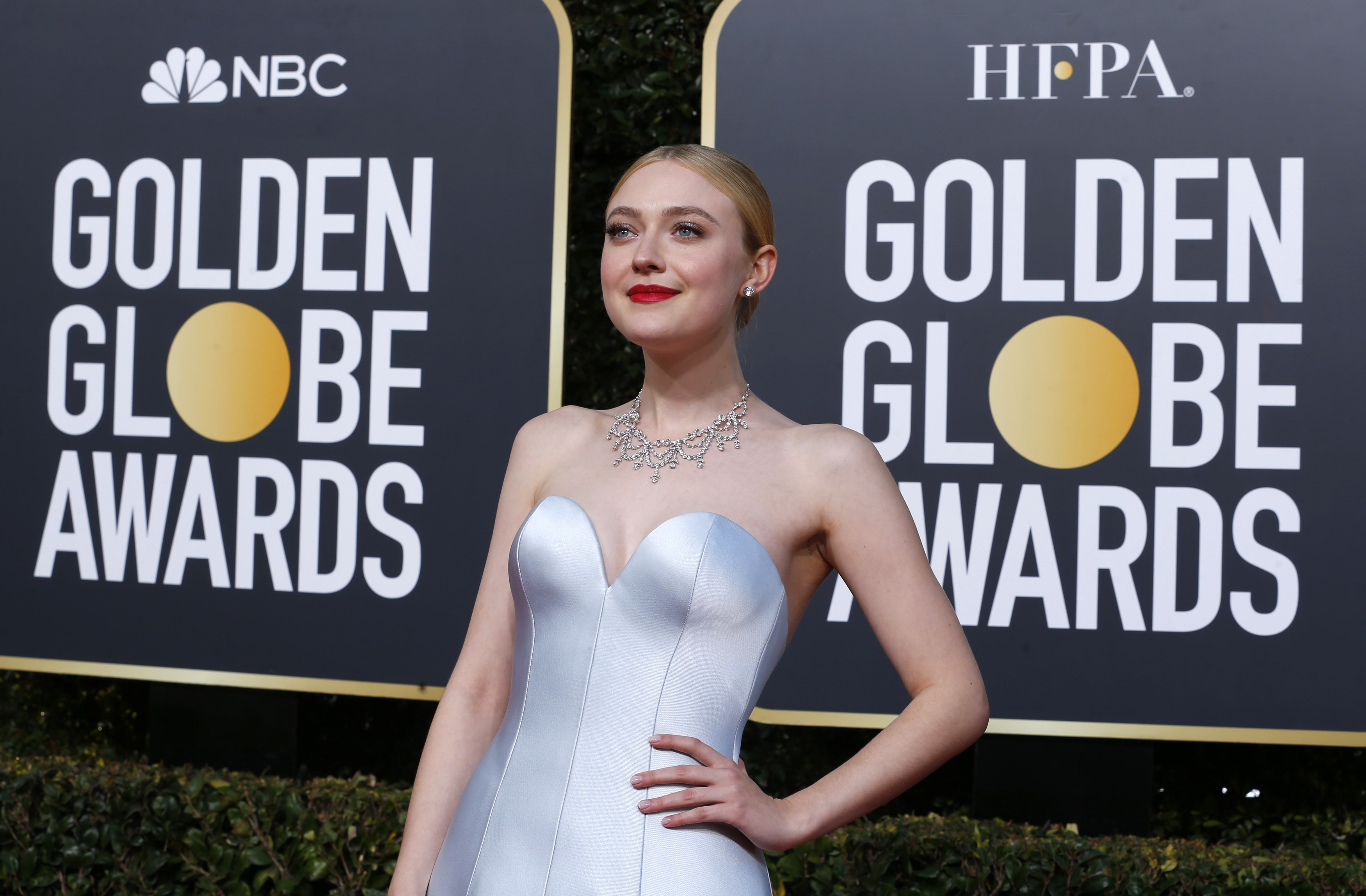 Dakota Fanning, star of The Alienist.