The Supreme Court on Tuesday revamped the “cumbersome” procedure impeding the execution of passive euthanasia, laying down a definite timeline for medical experts, and cutting the red tape involved in the preparation of a living will by those who want withdrawal of treatment essential to life when they become terminally ill

The Supreme Court on Tuesday revamped the “cumbersome” procedure impeding the execution of passive euthanasia, laying down a definite timeline for medical experts, and cutting the red tape involved in the preparation of a living will by those who want withdrawal of treatment essential to life when they become terminally ill.

A Constitution bench, headed by justice KM Joseph, paved the way for major changes in the guidelines prescribed by the 2018 judgment of the top court, making steps in the process timebound and less complex in recognition of the right to die with dignity.

The bench, also comprising justices Ajay Rastogi, Aniruddha Bose, Hrishikesh Roy and CT Ravikumar, tweaked the previous judgment to do away with the necessity of a judicial magistrate to attest or countersign a living will, and held that an attestation by a notary or a gazetted officer would be sufficient for a person to make a valid living will.

Instead of the living will being in the custody of the district court concerned — as directed by the court in 2018 — the bench said that the document will be a part of the national health digital record which can be accessed by hospitals and doctors from any part of the country.

Another crucial change brought about by the bench pertained to the constitution of the primary and secondary board of doctors who would examine the condition of the patient to take a decision whether the instructions given in the advanced directive should be carried out.

While the 2018 judgment said that the primary board should comprise at least four experts from the fields of general medicine, cardiology, neurology, nephrology, psychiatry or oncology — with overall standing in the profession for at least 20 years — the bench on Tuesday said that a team of three doctors, including the treating physician and two other doctors with five years of experience in the concerned specialty will comprise the primary board.

The primary board will preferably decide within 48 hours on the withdrawal of further treatment, noted the bench. The 2018 judgment did not lay down any outer limit for a decision by the primary board on executing the living will. 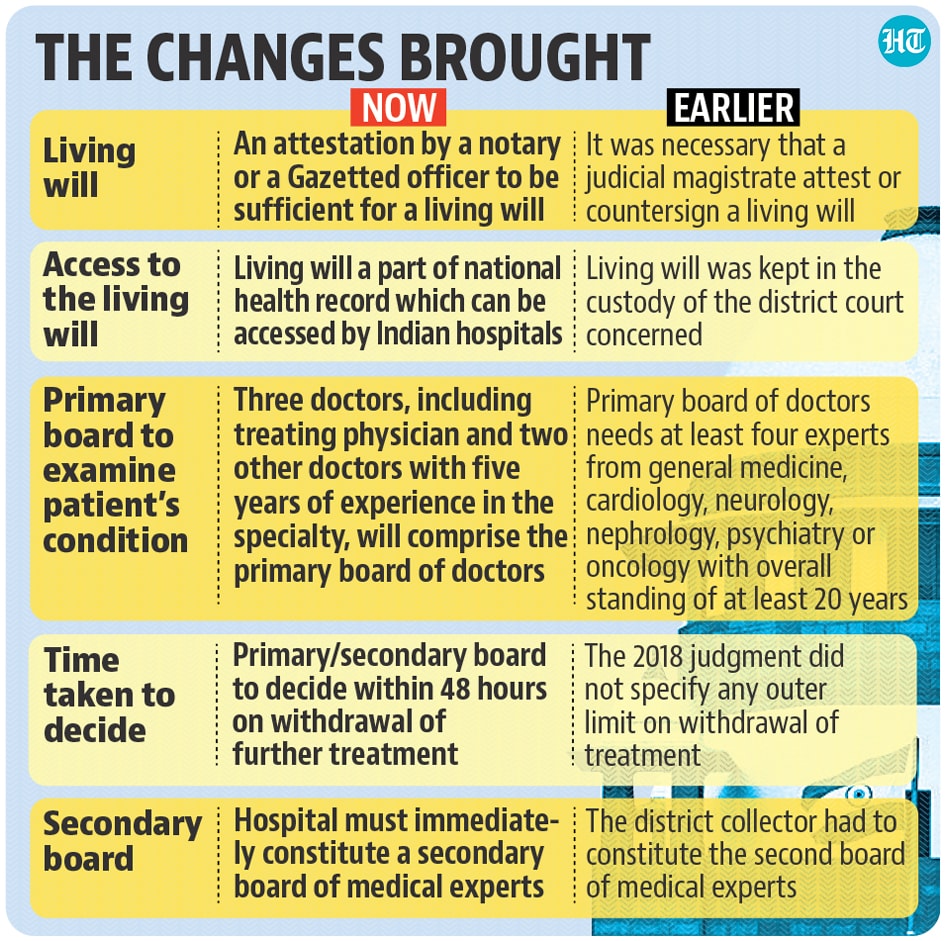 If the primary medical board certifies that the treatment should be withdrawn in terms of the instructions contained in the living will, the hospital shall immediately constitute a secondary medical board comprising a doctor nominated by the chief medical officer of the district concerned and two subject experts of the relevant specialty with minimum five years’ standing who were not part of the primary board. Under the 2018 judgment, the district collector concerned had to constitute the second board of medical experts.

“This board will also decide preferably within 48 hours... They may also need to reflect on the conditions or consult others,” said the bench, adding a 48 hour-deadline appears to be reasonable in such cases. There was no timeline specified secondary medical board in the 2018 judgment.

After both the boards approve the execution of the living will, the jurisdictional magistrate will be immediately intimated about the decision, said the bench.

If the hospital’s medical board denies permission to withdraw medical treatment, the family members of the patient can approach the relevant high court, which forms a fresh board of medical experts to enable the court take a final call.

While those making the living will specify the executors of their will for the consent on the behalf of the terminally ill patients, the family members of other terminally ill patients can also make a decision on withdrawal of treatment subject to the safeguards and the procedure mentioned for those who did not ready advanced directives.

The bench said that its order with the new guidelines should be sent to all the high courts for the framing of appropriate rules regarding storage of digital records of the living wills as well as to the health secretaries of states and Union territories for communicating it to chief medical officers of all districts.

The bench dictated a part of the judgment in the open court even as it approved the changes jointly suggested by Indian Society of Critical Care Medicine , the applicant in the case which wanted modifications in the 2018 judgment, and the Union government. The detailed judgment will be released later.

Last week, the Centre told the bench that it would not enact a legislation on passive euthanasia, adding that the anxiety to take someone’s life must not outweigh the requirement of essential safeguards. The government said that the top court’s 2018 judgment on allowing passive euthanasia after complying with certain safeguards sufficiently occupies the field and that there is no need for a specific law on the subject matter.

The Centre’s response was to a query from the bench about the status of a new law since the 2018 judgment said that the guidelines laid down by the court shall remain in force till a legislation is brought on the issue.

The court was considering a plea, argued by senior counsel Arvind Datar and advocate Prashant Bhushan on behalf of the petitioners, who said that the three-step process encompassing onerous conditions has made the entire judgment nugatory, and that there has not been a single case where someone desirous of exercising the right to passive euthanasia could finally comply with the procedural requirements.

While hearing the case last week, the bench acknowledged that the 2018 judgment needed a “little tweaking” to make it workable.

In March 2018, a Constitution bench recognised a person’s right to die with dignity, saying that a terminally ill person can opt for passive euthanasia and execute a living will to refuse medical treatment. It permitted an individual to draft a living will specifying that she or he will not be put on life support if they slip into an incurable coma.

The five-judge bench in 2018 included the present CJI Dhananjaya Y Chandrachud, who, in his separate judgment, said: “Dignity in the process of dying is as much a part of the right to life under Article 21. To deprive an individual of dignity towards the end of life is to deprive the individual of a meaningful existence.”