On Wednesday, the state reported 31,445 new infections, making it responsible for more than two-thirds of all new cases reported across India on the day.

India faced a brutal second wave of Covid-19 infections starting February that ran through the country till May. When this wave peaked on May 9, daily new cases fell sharply almost throughout India. However, in recent weeks, a growing outbreak in Kerala -- apparently sparked by Onam festivities -- has again started dominating headlines.

On Wednesday, the state reported 31,445 new infections, making it responsible for more than two-thirds of all new cases reported across India on the day. The state’s tally on Wednesday was also the most infections lodged in any state in India in a single day since May 27, when Tamil Nadu recorded 33,361 new cases.

It is a given that Kerala, of course, is the region reporting the highest number of new cases. But if we look at big states seeing high number of cases with respect to their population, we see others on the list are largely located in southern India. After Kerala (561 cases per million in the past week) on the list lie Maharashtra (37 cases per million), followed by Andhra Pradesh (25), Tamil Nadu (22), Odisha (20), Karnataka (20), and Telangana (9).

Here are five charts that try to how the post-second wave battle against the disease has weighed heavily on southern India and Maharashtra.

The seven-day average of daily new cases in India has risen from a 156-day low of 24 infections per million for the week ending Sunday to 25.3 for the week ending Wednesday. While this may only be a 5% increase, and is heavily influenced by numbers from Kerala, it remains a cause of concern. In the same period, the seven-day average of reported deaths across the country (per million population) has seen an increase of 10%.

And while the death trajectory has seen sudden spurts since June due to states such as Maharashtra and Bihar adding deaths to their tallies that had earlier gone unreported (see chart), the recent spurt is not due to any major death toll reconciliation.

All figures used in this analysis have been normalised using the region’s population as it provides a common comparison point for areas vastly different in size and population. 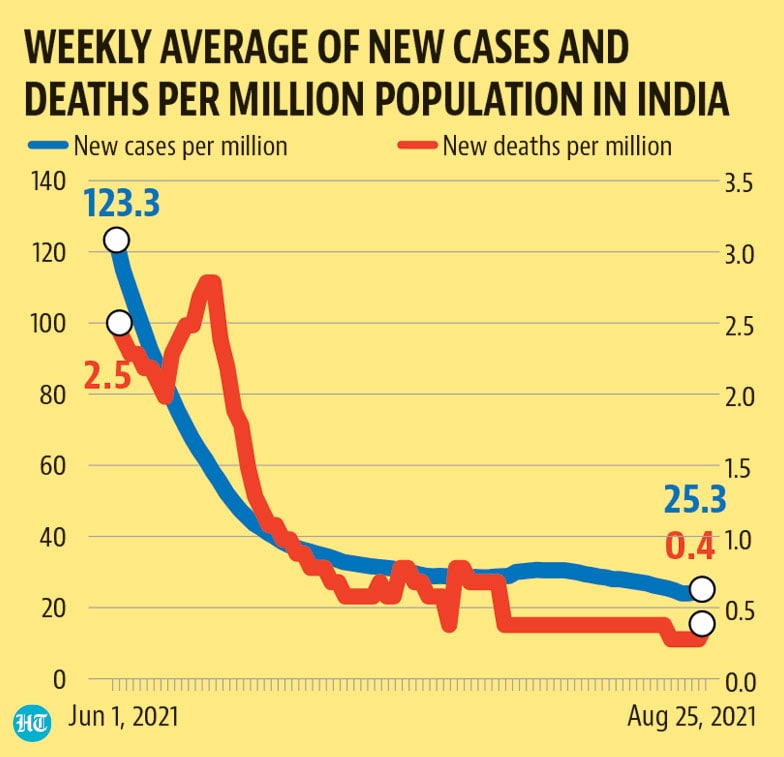 Kerala contributing 58% of all new cases in India

More than 58% of all new infections reported across the country in the past week can be traced back to just Kerala – a statistic that underscores how large an outlier the state is to the overall trend. 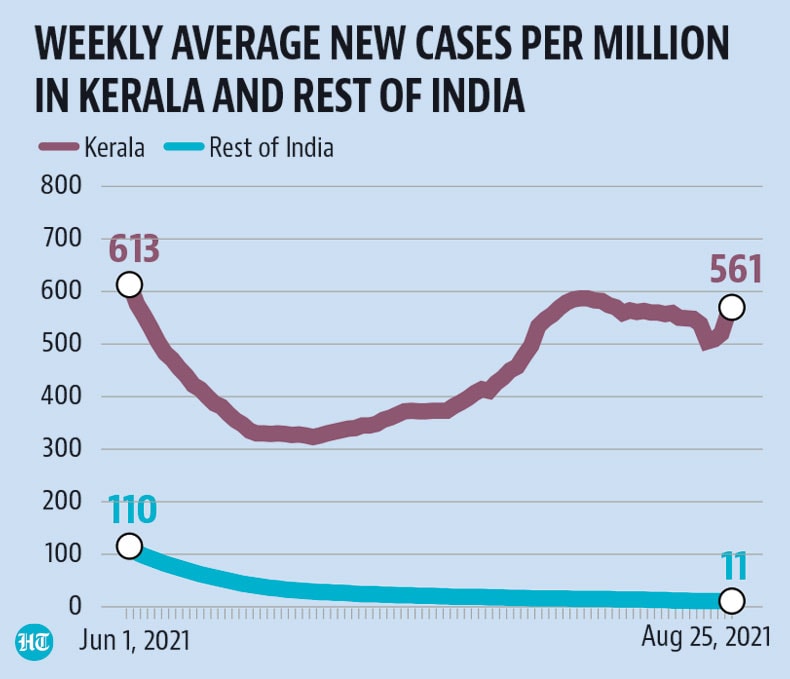 With population factored in, the state has seen 3.8 deaths per million residents against a national average of around 0.4 fatalities per million. Even removing Kerala’s numbers from the national tally to derive the “Rest of India” number doesn’t improve the national figure by much – it only drops to 0.3 deaths per million. To be sure, it still implies that Kerala is currently reporting 14 times as many deaths due to Covid as the rest of the country.

This is not surprising as Kerala, despite its recent surge in infections, remains the region with one of the best case fatality rate (CFR) in the country – 0.5% against a national average of 1.3%. 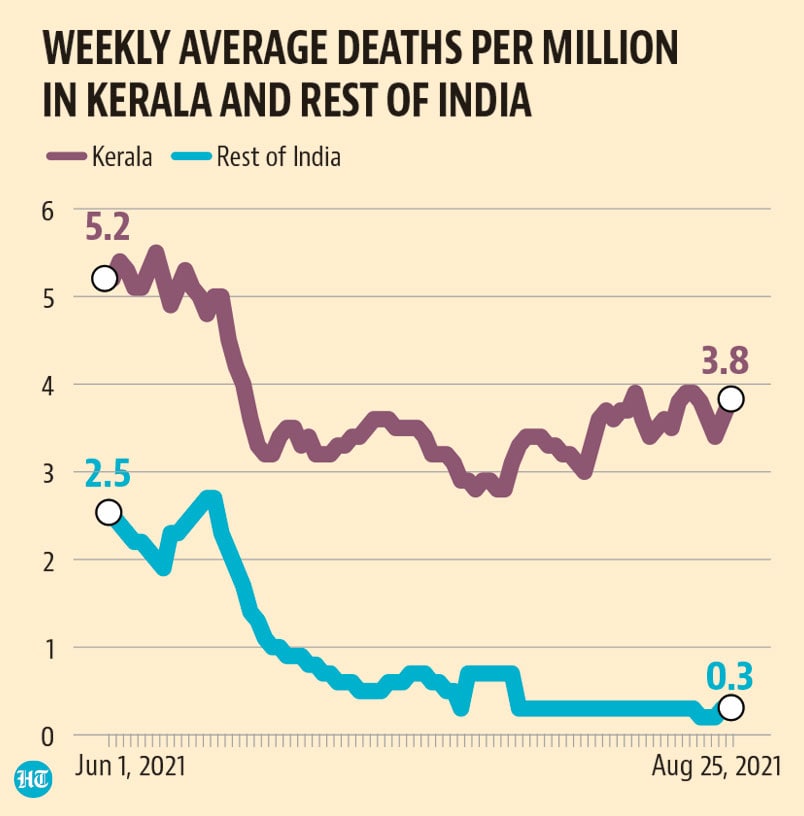 Six regions seeing 16 times as many cases than the rest

When the numbers from Maharashtra and five states from south India – Andhra Pradesh, Tamil Nadu, Telangana, Kerala and Karnataka – are taken together, we see that average new cases per million residents in these regions have grown 7% (from 76.8 to 81.9) in the past four days (against a national average of a 5% increase, as stated above). 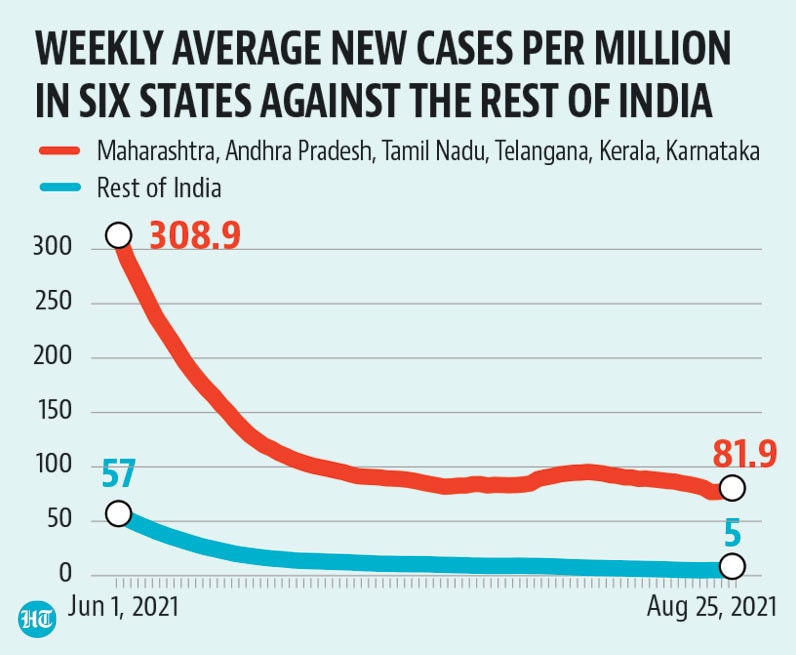 ...with a slightly better performance in saving lives

A fact worthy of note here is that these regions are only getting better. On June 1, these regions were seeing an average of 5.9 fatalities every day for every million residents – 4.6 more than the rest of the country at the time (where there were 1.3 deaths per million). This gap has almost steadily improved and has now been reduced to 0.9 deaths per million in the past week. 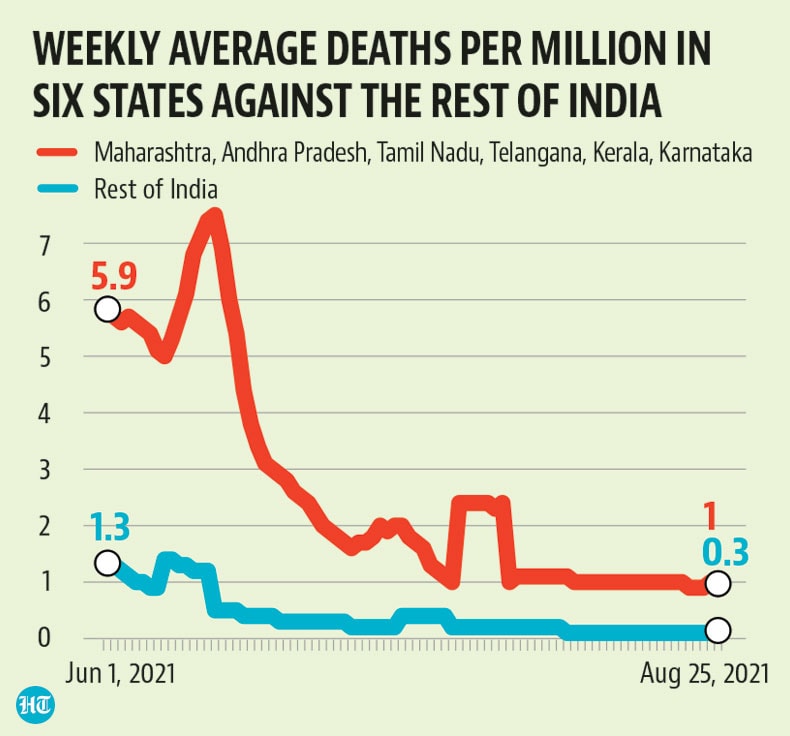