Home / India News / Number Theory: How much does an average Indian earn?

Number Theory: How much does an average Indian earn?

The average annual per capita income of households interviewed in the LASI survey conducted in 2017-18 is ₹44,901. This is just about 39% of the per capita income in the same year according to the National Account Statistics
Share Via
Copy Link
ByAbhishek Jha, New Delhi

India’s per capita annual income in 2019-20 was ₹1,26,968, according to provisional estimates published on January 7. This average, given India’s large income inequality, is not representative of the earnings of average Indians. Because India does not publish income statistics, and because consumption estimates, which are the next best proxy, have not been published since 2011-12, there is a debate around average incomes of Indians across class and social groups.

To be sure, private surveys such as the India Human Development Survey (IHDS) have published income statistics. However, they do not enjoy the sanctity of official data. The report on the Longitudinal Ageing Study in India (LASI), which was undertaken under the aegis of the Ministry of Health and Family Welfare (MoHFW) in 2017-18, is the first to given an idea about average incomes of Indians.

To be sure, LASI is based on a relatively small sample (42,249 households), and its reference frame is confined to households which had at least one person aged 45 years or higher.

Also, unit level data for LASI is yet to be released. These caveats notwithstanding, the results offer some interesting insights.

LASI also gives quintile-wise per capita incomes for different professions. It shows that intra-class income inequality is the largest among non-agricultural businesses and the self-employed, while it is the smallest among those employed in agriculture. This is a trend which holds for caste-wise and rural-urban inequality as well.

3. The rich seem to be gaining more from govt subsidies

6% of India’s central budget was spent on subsidies according to the 2020-21 Budget. There has always been a debate on whether or not they benefit those at the bottom of the pyramid. The LASI report has tried to answer this question by estimating per capita income from government/-public transfers. This has been defined as income received from a list of 13 kinds of government transfers such as agricultural subsidies or subsidies on LPG cylinders. The statistics present an interesting challenge for the government. India does well when it comes to social and spatial targeting of subsidies, but the rich still end up gaining more from them. Households living in villages or belonging to Scheduled Tribes (STs), Scheduled Castes (SCs) and Other Backward Classes (OBCs) report higher per capita incomes from subsidies than the ones living in cities or not belonging to these social groups. Despite this, top 20% of households get ₹1.43 of government support for every rupee which goes to the poorest households from such spending. 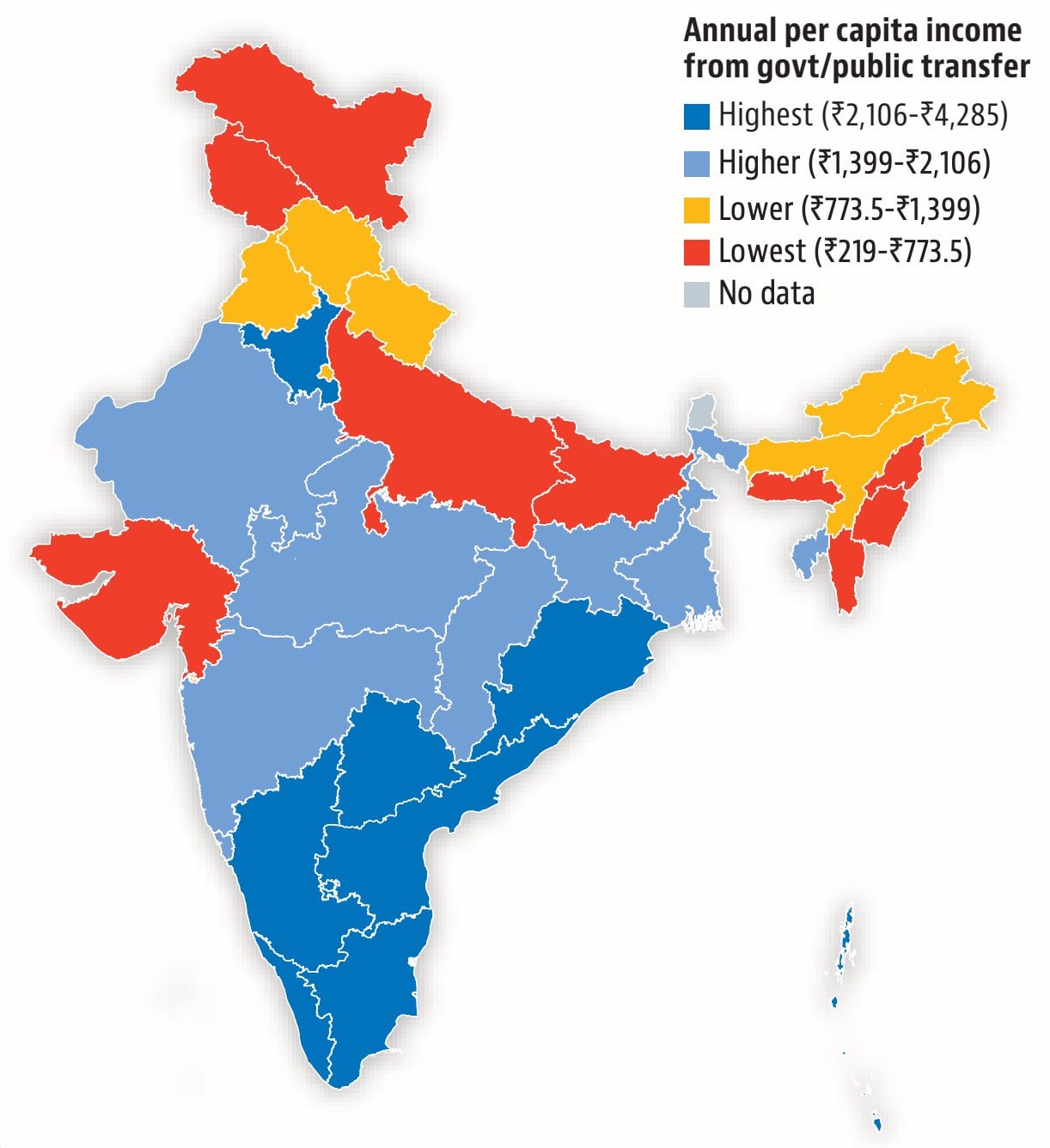 4. Most Indians are a content lot, but it could be a result of economic ghettoisation

Even at such low income levels, almost half of Indians think of themselves as being at par with their peers. What is even more surprising is the fact that this feeling hardly changes whether one looks at the poorest or the richest households. To be sure, these statistics could be a reflection of an entrenched economic ghettoisation in India. This is because respondents were asked to choose options on how they perceived their financial condition compared to other households in the same geographic community. On average, perceived destitution (financial condition being well below average) is 3.4 times more widespread than perceived opulence (financial condition being well above average) in India. This divide is greater in rural areas compared to urban areas.