Home / Business / Polls over, it’s back to managing the economy

Polls over, it’s back to managing the economy

The latest election cycle came to an end on March 7, with the last phase of polling in Uttar Pradesh. But this time, the BJP government at the Centre is unlikely to be happy about the governance issues it will have to deal with.

In normal times, governments consider it a relief when election campaigning ends, as they can go back to matters of governance. The Bharatiya Janata Party (BJP) has invested more political capital on this issue than anyone else, best seen in its push towards the one-nation-one-election campaign. The latest election cycle came to an end on March 7, with the last phase of polling in Uttar Pradesh. But this time, the BJP government at the Centre is unlikely to be happy about the governance issues it will have to deal with. This is because managing the economy in the current environment will involve a very hard bargain between controlling inflation and preserving the fiscal balance. Here are five charts which capture the government’s challenges.

The oil shock is here

This year’s Economic Survey assumed that crude oil prices will be in the range of $70-75 per barrel. As far as assumptions go, few have been at the cusp of being as wrong as this one. Brent crude prices were $124.5 a barrel at 5pm on March 7, after touching $130 per barrel earlier. Petrol and diesel prices have been kept frozen in India since November 4. This is in keeping with the unofficial practice of keeping prices unchanged when elections are underway. This time, however, the gap between what should have been market determined prices and the actual prices has become quite wide. One of the biggest decisions the government will have to take, perhaps on March 7 itself, is the quantum of increase in auto fuel prices. This is likely to impact both inflation and inflation expectations. Oil not the only commodity experiencing tailwinds to prices

The current crisis would have been easier to handle if its effect were limited to just crude oil prices.That does not seem to be the case and prices of other commodities have been increasing at a rapid pace as well. The Bloomberg Commodity Index (BCOM) was at 132.37 points at 5:15pm on March 7, the highest since July 7, 2014. BCOM has gained 17 points since February 24, when Russia attacked Ukraine. To be sure, it has had significantly higher values in the past. Its peak came on July 2, 2008, when it reached 237.9. However, commodity price pressures are unlikely to ease as war rages in Europe.

As crude oil prices increase and stay elevated, the pressure is on the central government to reduce excise duties on petrol and diesel. This is not going to be the only potential squeeze on the fiscal deficit. A research note by Pranjul Bhandari, chief India economist at HSBC India, said that with an increase in prices, corporate profits too will come under pressure. “We estimate that a 10% rise in domestic oil price will shave 0.25ppt from the profit-to-GDP ratio. In the past we have calculated that for every 1ppt rise in input costs, profits tend to fall by 0.4ppt, and the remaining 0.6ppt tends to be passed on to consumers as higher prices. Using these sensitivities, we estimate that corporate profits could fall by 0.3% of GDP,” the note said. PPT stands for percentage point.

While the profit-led economic recovery, as opposed to a wage-led one, has been described by many economists as a cause of concern, higher corporate profits were a source of revenues through corporate taxes. A fall in corporate profits because of cost pressures will mean headwinds for tax collections. “Ukraine and Russia account for about 30% of the world’s traded wheat and still have crops from last year to ship,” said a report published in the Financial Times newspaper on March 4. “There is no end in sight to the upswing because 30% of the world’s wheat exports have been cut off from the global market,” the report quoted Carsten Fritsch, an analyst at Commerzbank, a German lender.

As prices rise on global shortages, India is eying an opportunity to utilise its record wheat stocks, as per an HT report. While this could indeed be an opportunity, the tightness in global wheat markets also comes with a flip side of a possible surge in food inflation.

The Food Price Index of the United Nation’s Food and Agriculture Organisation has already reached a record 140.7 points in February. It is likely to increase further. 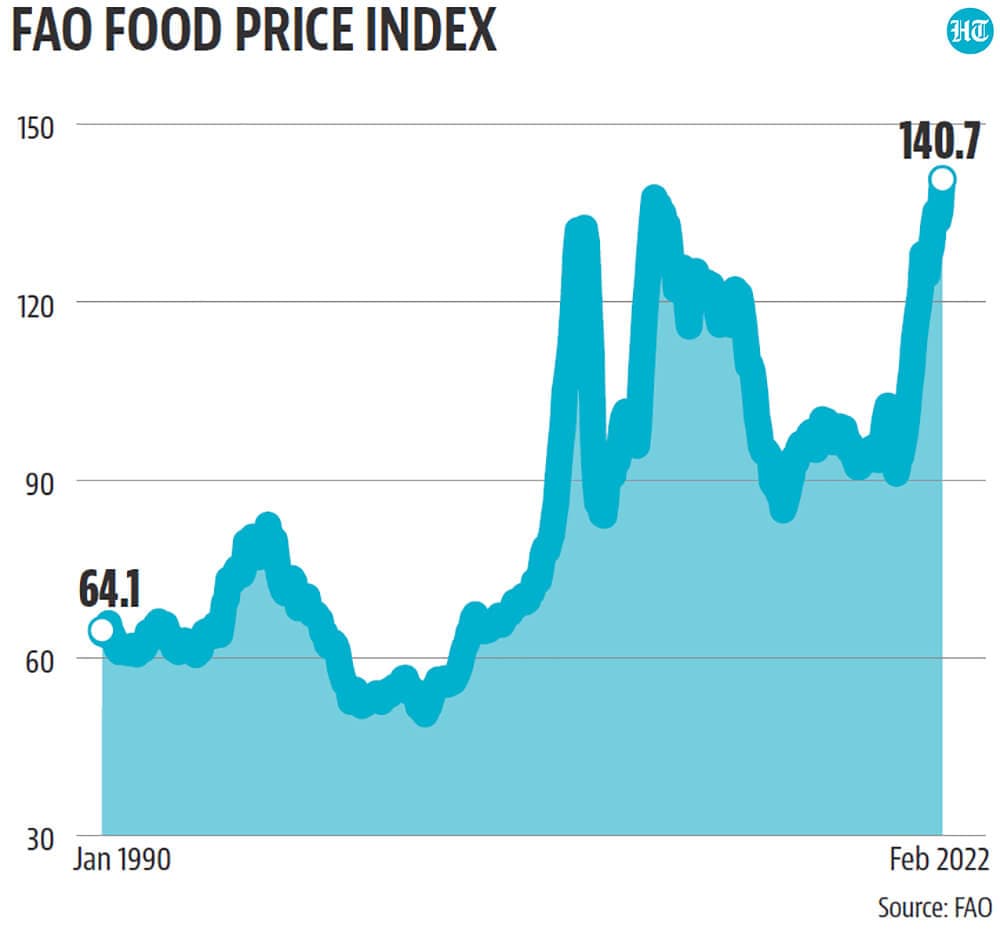 As international prices increase and a bigger amount of India’s farm produce is diverted to global markets, domestic food price pressures are expected to become broad-based. A sustained rise in cereal prices is bad news for food inflation. Any effort to ban large-scale exports to contain domestic prices is likely to breed discontent among farmers. With international prices and possibly domestic prices also increasing, the government might come under pressure to increase the minimum support price to remain competitive in procuring grains. Once again, this is a situation the government would have been happy to not confront.