Delhi to enforce anti-air pollution plan from Oct 1: All you need to know

Under the ‘severe’ or Stage 3 category, construction and demolition work, barring those that are essential projects, will be banned.

Authorities across the National Capital Region (NCR) can start imposing restrictions under the revised Graded Response Action Plan (Grap) to combat pollution from Saturday, though curbs are unlikely to come into effect immediately, with the air quality till at least October 2 forecast to be below the preset threshold for mitigation measures to be introduced.

Grap prescribes a list of curbs when air pollution levels in Delhi hit certain trigger points. The restrictions get stricter as the AQI worsens. The updated plan, released by the Commission for Air Quality Management (CAQM) on July 13, will now take into account the air quality index (AQI) and not just PM2.5 and PM10 as triggers for the curbs. 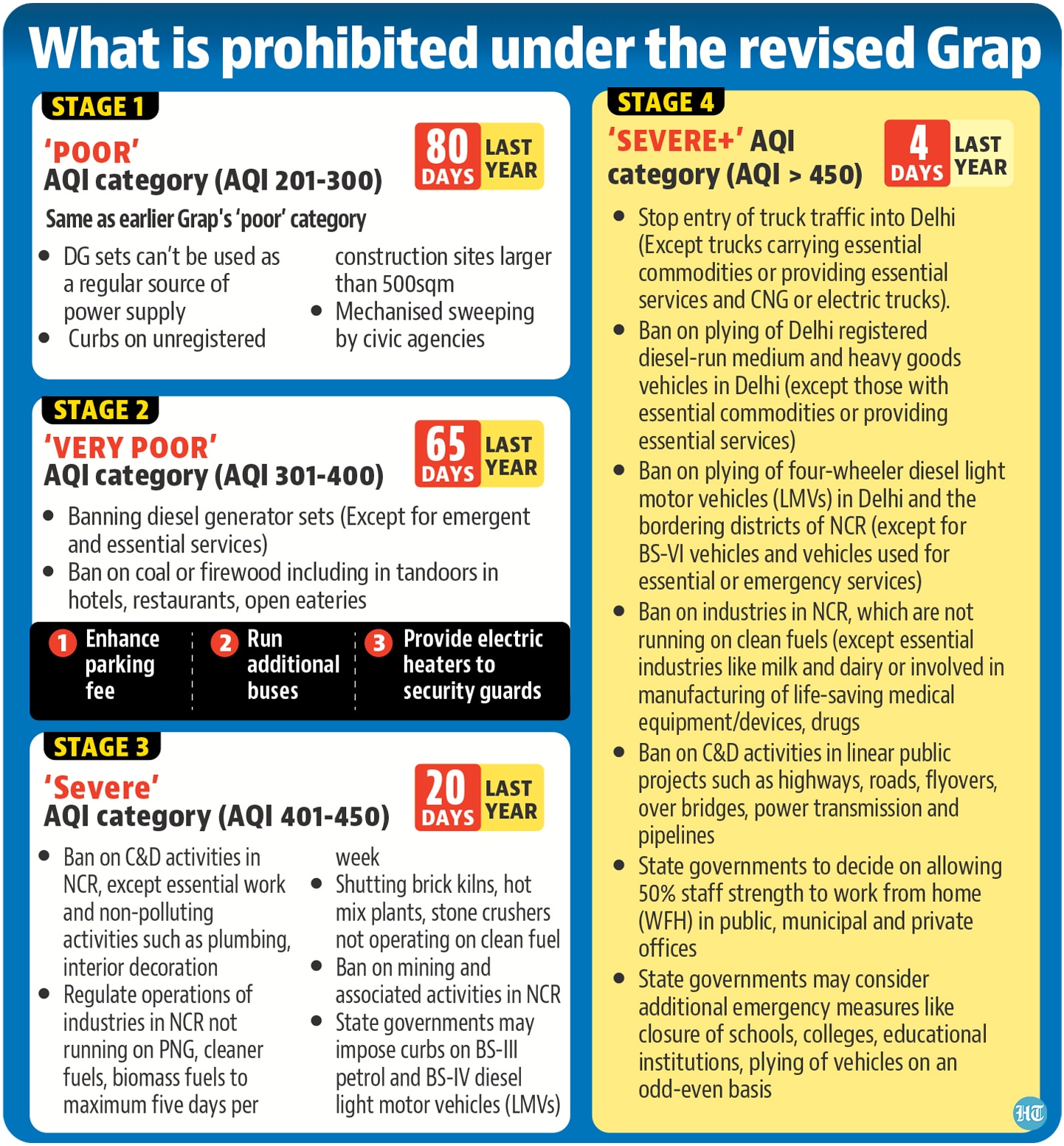 The first lot of measures, which will include a ban on the use of diesel generator sets as a regular source of power supply, under the plan will take effect when the AQI hits 201.

Though on the rise, Delhi’s AQI was recorded at 151 (moderate) on Thursday, with forecasts showing AQI is likely to remain in the ‘moderate’ range in the next two days, including on October 1.

It may get closer to the ‘poor’ category on October 2, with similar chances on October 3, according to the Early Warning System (EWS) in place for forecasting pollution levels, with an improvement in air quality once again expected October 4 onwards.

The imposition of restrictions under the three most serious levels of Grap will be pre-emptive instead of after pollution levels have spiked, and will have to be enforced by the CAQM sub-committee at least three days in advance, relying on forecasts made by the India Meteorological Department (IMD) and the Early Warning System, which has been developed by the Indian Institute of Tropical Meteorology (IITM).

Stage 1 or the ‘Poor’ category will invoke a basic list of measures that include agencies carrying out mechanised sweeping and sprinkling of water on roads. Construction and demolition work at sites larger than 500 square metres that have not registered themselves on the state government’s ‘web portal’ will have to be stopped.

Under the category, no diesel generator sets can be used as a regular source of power supply, with them being allowed only as a back-up.

Stage 2 includes measures such as a ban on diesel generator sets except for those involved in emergency services, along with a ban on coal or firewood, including for tandoors in hotels, restaurants and open eateries. States will also have to consider increasing parking fees, augment public transport and resident welfare groups should provide security staff heaters (to dissuade the use of bonfires).

Under the ‘severe’ or Stage 3 category, construction and demolition work, barring those that are essential projects, will be banned. Linear public projects such as highways, roads and pipeline laying work will also be allowed. The other actions include a ban on industries not running on clean fuels, shutting down of brick kilns, hot mix plants and stone crushers not operating on clean fuels. There will also be a ban on mining and associated activities in NCR and state governments in Delhi-NCR can also impose restrictions on BS III petrol and BS IV diesel light motor vehicles (LMVs).

However, the most stringent category is Stage IV, with forecasts of the AQI touching 451 or higher, warranting the stopping of entry of trucks into Delhi, a ban on Delhi-registered medium and heavy goods vehicles, a ban on plying of diesel four wheelers in Delhi that are not BS IV or higher, a ban on construction and demolition (C&D) activities including linear projects and state governments may take additional measures such as closure of schools, colleges, educational institutions and plying of vehicles on an odd-even basis.

Last year, October recorded six ‘poor’ air days and no ‘very poor’, ‘severe’ or ‘severe plus’ days, with the AQI in the month peaking at 298.

An official on the CAQM sub-committee on GRAP said the three days forecasts were being monitored and a meeting can be held when there are chances of the AQI reaching ‘poor’. “While measures under the Poor category are enforced automatically, a review meeting will still be held if the AQI is expected to deteriorate. This may happen around October 2 or 3, before rains once again wash away pollutants. For Stage II, there is still some time as AQI is unlikely to reach close to Very Poor any time soon,” said the official.

Anumita Roychowdhury, executive director, research and advocacy at the Centre for Science and Environment (CSE) said this year, GRAP is likely to be more effective, with it relying on forecasting instead of action when AQI has already worsened. “We are also seeing its implementation earlier than normal this year, that is on October 1 instead of October 15 normally. Also, Diwali is much earlier this year, so it is possible November and December may be relatively cleaner,” she says.