The document filed in the Saket district court marks an important step in the shocking murder that led to protests and demands for capital punishment for the accused.

The Delhi Police on Tuesday booked Aaftab Poonawala for the murder of his girlfriend Shraddha Walkar in a south Delhi flat in May 2022, and also for hiding evidence, as they filed a 6,629-page charge sheet in the grisly crime case.

According to the charge sheet, on the day of the incident Poonawala attacked Walkar in a fit of rage since she had gone to see a friend in Gurugram against his wishes. The charge sheet also said that the accused used several weapons to dispose of Walkar’s body. The police had recovered a saw and some knives from the crime scene.

The document filed in the Saket district court marks an important step in the shocking murder that led to protests and demands for capital punishment for the accused.

According to the investigators Poonawala killed Walkar in May last year in a flat in Chhattarpur Pahadi area, and then chopped up her body into 35 pieces. He then bought a refrigerator for storing the body pieces and disposed them in wooded areas across south Delhi and Gurugram over three months.

In the charge sheet, the police have invoked sections 302 (culpable homicide amounting to murder) and 201 (causing disappearance of evidence of offence) of the Indian Penal Code.

Addressing reporters at Delhi Police headquarters, joint commissioner of police (southern range) Meenu Chaudhary said, “During the investigation, the police found that Walkar had gone to visit one of her friends on the day of incident against Poonawala’s wishes. This triggered the killer. The investigation also showed that the killer used several weapons during the commission of the crime.”

According to the charge sheet, the police have submitted oral statements of over 150 persons, the reports of DNA sampling, narco-analysis, polygraph and other scientific tests.

In an exclusive report on the charge sheet on Sunday, HT had reported details of the evidence and the investigation into the case that are included in the document.

“Apart from circumstantial and factual evidence, the police have also submitted supporting evidences (both electronic and manual), which establishes that the victim was murdered with a malafide intention. Altogether nine teams of police, dedicated to this case, thoroughly searched and raided all possible locations in Delhi, Himachal Pradesh, Haryana and Maharashtra to piece together information and evidences related to this case,” the joint commissioner said.

She added that a dedicated “pairavi” (prosecution) team has been constituted to ensure maximum punishment to the accused. “The police have been able to connect the evidence and the sequence of events to show the crime was committed, the motive, the weapons used in the crime as well as how the evidence was hidden. During the investigation, many therapists and senior officials from the crime team and forensic laboratories were consulted. Even the digital evidence, including call details records, internet protocol detail record (IPDR) and CCTV trails, were investigated,” Chaudhary said.

According to the charge sheet, circumstances also link the accused to the crime.

An investigator associated with the case said, “Even the results of the narco-analysis test, though not admissible in the court of law, are positive and support our case.”

The charge sheet also includes the statement that Poonawala gave to the police under section 161 of CrPC. Statements recorded under this section are admissible as evidence in the court.

In his statement, Poonawala said that the couple was fighting over their decision to shift to Delhi. While Walkar wanted Poonawala to bring his belongings from Mumbai immediately, Poonawala was delaying it, the charge sheet said. 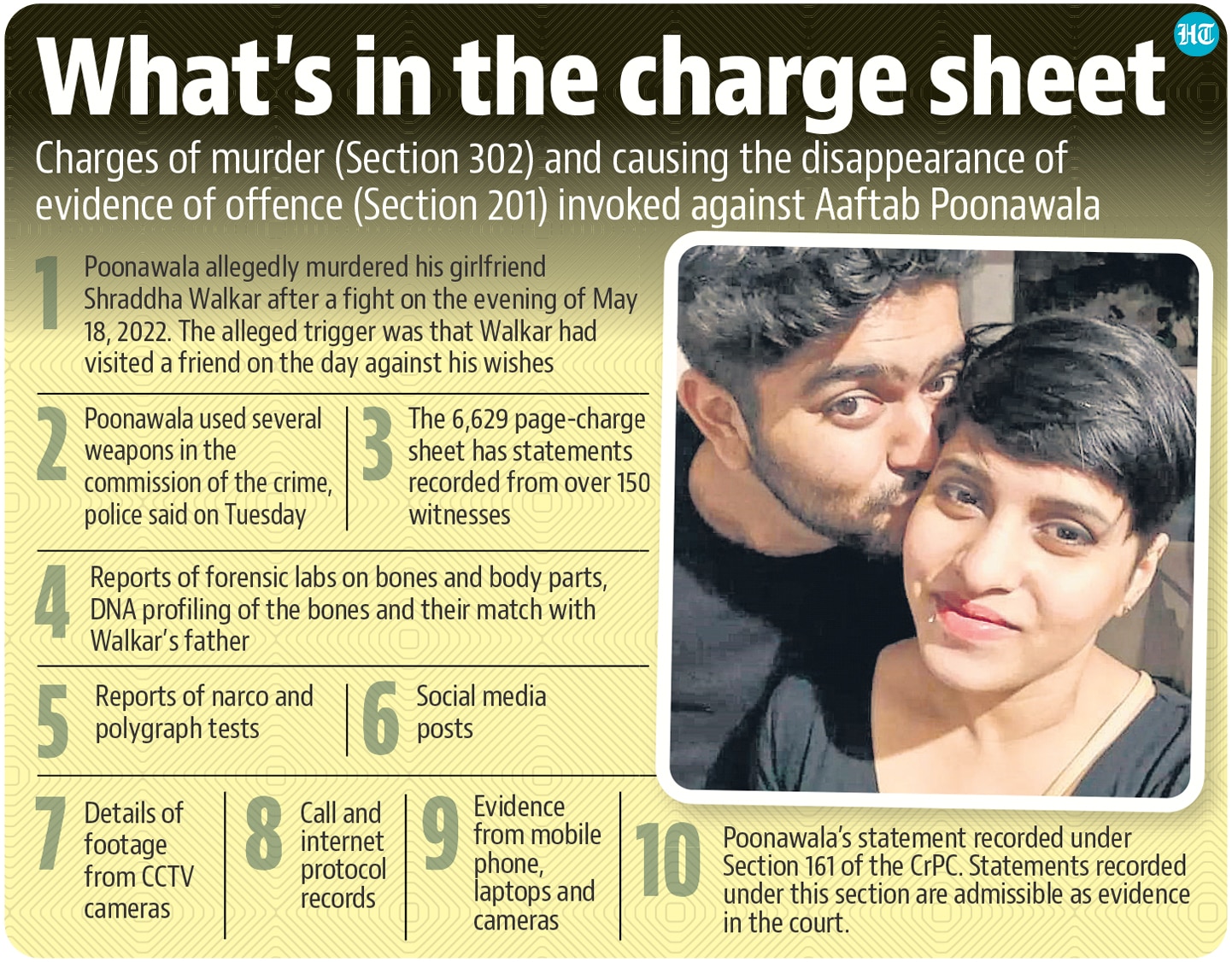 Elaborating on how Poonawala had assaulted Walkar earlier too, the charge sheet includes the statements of the victim’s father, her friends and former co-workers. According to the charge sheet, one of Walkar’s friends, Rahul Rai had helped her in approaching the Mumbai Police in December 2020 to lodge a complaint of assault against Poonawala.

Rai told the police how Poonawala had attempted to strangle Walkar at least twice earlier.

Poonawala, a call centre executive, was arrested by the Delhi Police on November 12, 2022. Originally from Vasai near Mumbai, the couple were in a relationship and had moved to Delhi in May 2022.

Police investigation has shown the murder came to light when a friend informed Walkar’s father, Vikas Madan Walkar, that he had not heard from her for at least two months. Her father then informed Mumbai Police in October. A month-long probe led the Mumbai Police to Mehrauli olice station area in south Delhi. The grisly crime was unearthed on November 12 after Poonawala ostensibly told the police that he murdered Walkar in their Chhattarpur flat six months ago, and chopped her body into at least 35 pieces.

(With inputs from Deepankar Malviya)