France has shut shops and cleared tourist destinations. Italy has locked down its entire population and sent out international pleas for help after deaths piled up. After weeks of a sluggish response, the US declared a national emergency, with many states imposing shutdowns.
Share Via
Copy Link
Hindustan Times, New Delhi | By Rhythma Kaul

A pre-emptive lockdown and sweeping restrictions on travel and public places enforced without political considerations may be India’s only fighting chance against the deadly coronavirus disease, experts said on Sunday, calling for immediate shutdowns to fight the disease that has claimed at least 6,000 lives worldwide.

The warning came on a day the number of infections in India stood at 107, recording a sharp rise over the last 24 hours. On the same day, Spain imposed a nationwide lockdown after reporting more than 2,000 cases and over a hundred deaths – becoming the second worst-affected country in Europe after Italy. France has shut shops and cleared tourist destinations. Italy has locked down its entire population and sent out international pleas for help after deaths piled up. After weeks of a sluggish response, the US declared a national emergency, with many states imposing shutdowns.

In each of these cases, experts said, the lockdown came too little too late, after infections and deaths skyrocketed and medical professionals overwhelmed with the deadly community transmission phase of the disease – when it spreads to people who have neither been to a global hot spot nor been in direct contact with someone testing positive for the infection. With a patchy and stretched public health system and millions of desperately poor people, India can ill afford such a scenario, and needs a rapid response that is not affected by political considerations, add experts. “Other countries went into a lockdown after there was an epidemic situation but for India we cannot afford to wait for the situation to reach that stage. For a country like India, it makes more sense to take preventive measures,” said Dr Balram Bhargava, director general of the Indian Council of Medical Research, and secretary, Department of Health Research. Evidence suggests that once the virus starts circulating in the community, which means the source of infection can’t be traced, the lockdown of an area to prevent infected persons coming in contact with others is efficient in curtailing its spread. A study published in the Journal of the American Medical Association in February showed that the true number of cases in the community slowed down after China initiated the shutdown of Wuhan and a day later when 15 other cities in the Hubei province were locked down.

But putting a lockdown in place when the outbreak has reached epidemic proportions can be a case of dangerous delay. India has decided to suspend most visas for a month, and some states have announced shutdowns of schools, cinemas and public events. But more needs to be done, say experts. The response of states has been uneven, and no state government has initiated a total lockdown or strict curbs on travel and public places. In many places, people have been found to have given authorities the slip, or escaped from quarantine facilities after having tested positive for the virus. Because India is a multi-party government system, the response also needs to be uniform and enforced without political considerations. 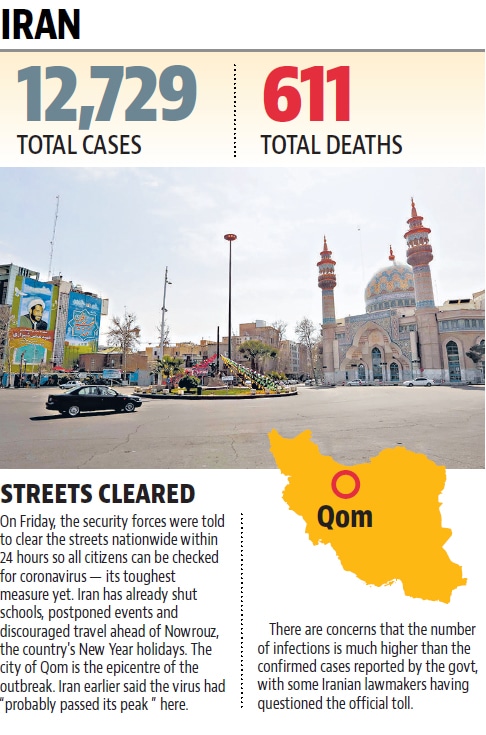 Doctors at the country’s apex biomedical research organisation, ICMR, say pre-emptive lockdown at this stage is a good idea to ensure the situation does not lead to the stage of community transmission.

“There is no community transmission in India as yet, and there are several stages to cross before that worrisome stage is reached… The idea is to buy time as much as possible so that damage is minimum,” said Dr Bhargava. There are four main stages during disease outbreak: I, II, III and IV. Stage I is usually when cases are imported and not of local origin. Stage II is when there is local transmission of cases reported, which means a section of people that is testing positive is due to having come in contact with a laboratory positive person who had a travel history. There can be a single case or local clusters of positive cases in stage II.

Stage III is community transmission, wherein the scientists working to contain the outbreak are not able to pinpoint the source of infection. A person tests positive without any travel history or any contact history with a laboratory positive case.

And, the last stage-IV is when the outbreak is declared an epidemic, where it has spread to the entire country and cases return positive one after another in large numbers without any information on source of infection such as the situation seen in China and Italy. India currently is at Stage II of the outbreak, which experts say can be contained locally.

A section of medical professionals, however, feel that a total lockdown is not an economically viable option. “The lockdown is preventive, and seemingly a very brave decision of the government, but the question is for long can you continue like this...,” says Dr Dileep Mavlankar, director, Indian Institute of Public Health, Gandhinagar.