Junior doctors across West Bengal continued their stir for the fourth day on Friday, leading to health services being severely affected. The junior doctors have been on strike since Tuesday in protest against the brutal assault on two colleagues in Nilratan Sarkar Medical College and Hospital on Monday night by family members of an octogenarian patient who passed away. On Thursday, they defied a deadline by chief minister Mamata Banerjee to return to work, declaring that their agitation would continue till their demands for security on government hospital campuses are met.Expressing solidarity with the striking doctors in Bengal, the India Medical Association has declared “All India Protest Day” on Friday, with doctors in many parts of the country holding protests.Read | Bengal doctors’ strike enters Day-4, IMA declares ‘All India Protest Day’Here are the highlights:

Calcutta high court has refused to pass interim order on strike by junior doctors in state-run hospitals, and has asked West Bengal government to persuade them to rejoin work, reported news agency PTI.

A PIL has been filed in Calcutta High Court by Kunal Saha of People for Better Treatment, seeking that the doctors’ strike in the state be declared illegal. The HC has sought details of what steps had been taken by West Bengal on attack on doctors and the doctors’ strike, by next Friday. Next hearing to take place next week. : ANI

The Doctor’s Forum Society of Delhi’s Sir Ganga Ram Hospital says all doctors of the hospital are fully in support of “our colleagues in West Bengal and strongly protest against growing tendency of violence against doctors.” All private OPD clinics at the hospital will remain closed on Friday. : ANI

Members of Resident Doctors’ Association of All India Institute of Medical Sciences (AIIMS) continue to work wearing helmets, as a mark of protest: ANI

Delhi: Members of Resident Doctors' Association of All India Institute of Medical Sciences (AIIMS) continue to work wearing helmets, as a mark of protest against "worsening of violence against medical doctors in West Bengal." pic.twitter.com/6vAlBdFfPd

A group of West Bengal intellectuals on Friday came out in support of the agitating junior doctors at the NRS Medical College and Hospital in Kolkata and urged Chief Minister Mamata Banerjee to speak to the striking doctors to normalize the situation, reports IANS.

The intellectuals including renowned actor-filmmaker Aparna Sen, stage and screen actor Kaushik Sen, met the agitating doctors and expressed solidarity to their movement.

“We know that none of you look at the patients’ cast or religion while treating them. We also know that you are feeling the pain for the patients who have been left untreated due to this impasse. We are with you in this,” Aparna Sen said amid loud cheers from the junior doctors at the hospital premises.

“The Chief Minister is our guardian. I would request her to change her stance a bit on this issue and talk to the young doctors here. They are like your children. Please come here once and talk to them to sort out the problems,” she said.

West Bengal: 16 doctors of the RG Kar Medical College & Hospital, Kolkata submit their resignation stating, "In response to prevailing situation as we are unable to provide service, we would like to resign from our duty," pic.twitter.com/a3eVzs6ZLG

Doctors hold protest in Bengaluru over violence against doctors in West Bengal.

Token protest by doctors at govt, private hospitals in Telangana

Doctors across the government and private hospitals in Telangana staged token protests on Friday morning to express their solidarity with their colleagues who had struck work at Kolkata in protest against the brutal assault on a doctor. At several hosptials in Hyderabad, including Nizam’s Institute of Medical Sciences and Gandhi Hospital, doctors assembled on the hospital premises at 9 am and raised slogans demanding that violence against doctors be stopped forthwith.

Doctors of civil hospital in Punjab’s Ludhiana, affiliated with IMA, registered their protest against the attack on doctors in Kolkata. It was a symbolic protest and no work has been affected.

Union health minister Harsh Vardhan meets with doctors of New Delhi AIIMS who are also on strike in support of the stir by junior doctors in West Benal.

The health minister added: “I appeal to West Bengal CM to not make this an issue of prestige. She gave the doctors an ultimatum, as a result they got angry and went on strike. Today, I will write to Mamata Banerjee ji and will also try to speak to her on this issue.” ANI

Union Health Minister,Dr Harsh Vardhan on Friday appealed to striking doctors across the country to hold only symbolic protests. He told ANI, “ I’d like to assure all doctors that the government is committed towards their safety. I appeal to doctors to hold symbolic protests only & continue to carry out their duties.”

Members of Indian Medical Association in Kerala’sTrivandrum hold protest over violence against doctors in West Bengal.

In Rajasthan’s Jaipur, doctors at Jaipuria hospital carry out their duties wearing black bands as a mark of protest over violence against doctors in West Bengal. 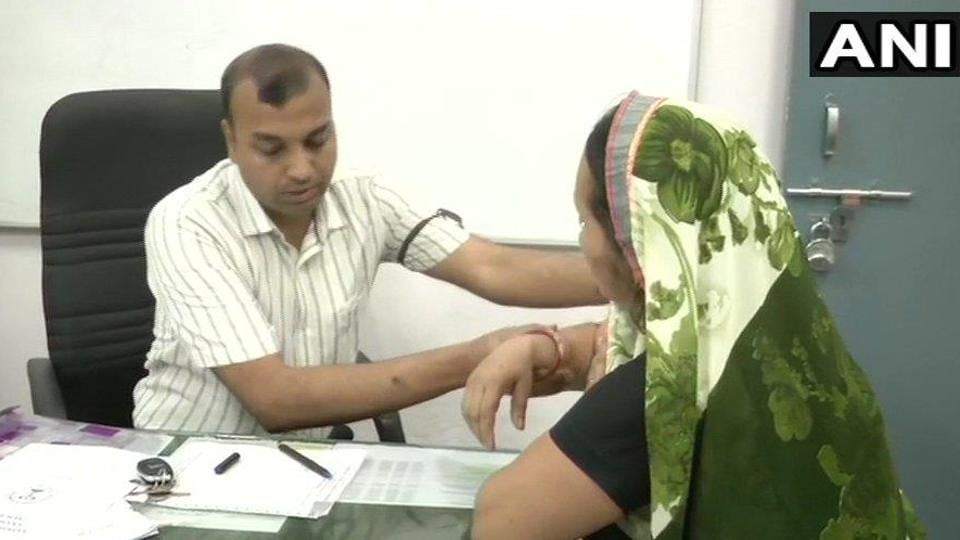 In Nagpur, doctors march with ‘Save the Saviour’ posters

Doctors with ‘Save the Saviour’ and ‘Stand with NRSMCH’ posters at Government Medical College in Nagpur, are holding a protest over violence against doctors in West Bengal. 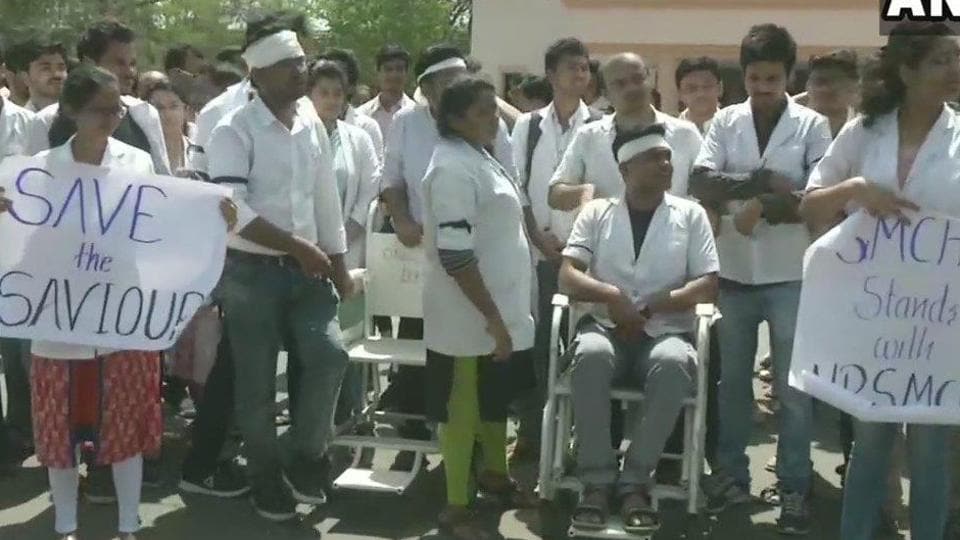 Doctors at All India Institute of Medical Sciences (AIIMS) prepare to observe strike over violence against doctors in West Bengal. 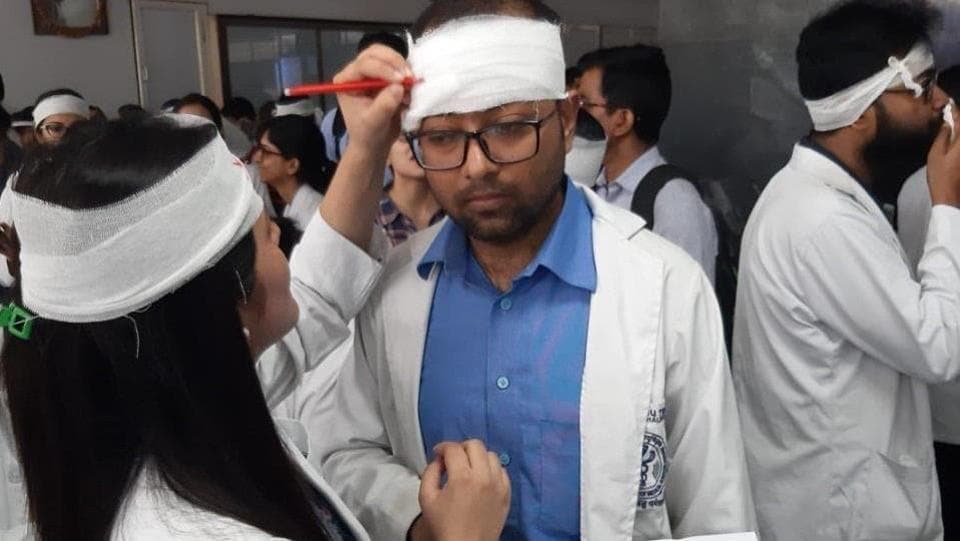 As junior doctors across the country are taking out marches demand protection for doctors, doctors’ union in Punjab’s Patiala has joined the protest too.

In the light of the recent assault on doctors in Kolkata, Maharashtra Association of Resident Doctors (MARD) joined the nationwide protest on Friday to demand protection for doctors.

Speaking to ANI, Prashant Chaudhary, President of MARD at Scion hospital, said: “The incident was clearly a targeted assault. This has now become a law and order issue. We express solidarity to the seriously injured doctors. We will abstain from providing our routine services from 8 am to 5 pm today, but at the same time we will make sure to inform the administration so that Outpatient Department treatment (OPD), Operation Theatres (OT) and wards keep running.”

Doctors in Delhi’s AIIMS, Maharashtra, Patiala and many other parts of the country have come out in support of the striking doctors in Bengal. All out-patient clinics and routine services will remain suspended at New Delhi’s All India Institute of Medical Sciences (AIIMS) and the Safdarjung Hospital with over 3,500 resident doctors from the two hospitals striking work. Maharashtra Association of Resident Doctors (MARD) are observing strike today over violence against doctors in West Bengal. Official statement says, “We are shutting down our OPD, ward and academic services from 8 am to 5 pm today. Emergency services will not be hampered.”:ANI

Patients facing difficulty at AIIMS due to doctors’ strike

Patients face difficulties as Resident Doctors Association (RDA) of AIIMS is on strike on Friday over violence against doctors in West Bengal. Relative of a patient said, “My mother’s dialysis was scheduled for today, we were told to go and get it done from somewhere else.” : ANI

State-run healthcare services continue to be severely affected in Bengal for the fourth consecutive day on Friday with junior doctors continuing their strike in defiance of chief minister Mamata Banerjee’s ultimatum to join work a day earlier.