The National Democratic Alliance (NDA) government is encouraging people to switch from vehicles fuelled by petrol and diesels to EVs as part of its commitment to reduce greenhouse gas emissions under the global agreement on climate change, and to reduce spending on oil imports, which amounted to $112 billion in the fiscal year ended March 31, 2019.

The Goods and Services Tax (GST) Council on Saturday cut the tax rate on electric vehicles (EVs) to 5% from 12%, a reduction that may lower the prices of electric cars by between ₹50,000 and ₹1.5 lakh, depending on the model and the make, and enable the creation of a mass market for the non-polluting personal transport machines.

The 36th meeting of the GST Council, the second presided over by finance minister Nirmala Sitharaman, also decided to reduce tax on EV chargers and charging stations to 5% from 18%. The council also exempted local authorities from paying GST on hiring of electric buses with a carrying capacity of more than 12 passengers. The decisions were taken by the GST Council, which comprises state finance ministers, via a video conference.

“The GST rate cuts on EVs and chargers are effective from August 1, 2019,” a finance ministry spokesperson said.

The National Democratic Alliance (NDA) government is encouraging people to switch from vehicles fuelled by petrol and diesels to EVs as part of its commitment to reduce greenhouse gas emissions under the global agreement on climate change, and to reduce spending on oil imports, which amounted to $112 billion in the fiscal year ended March 31, 2019. 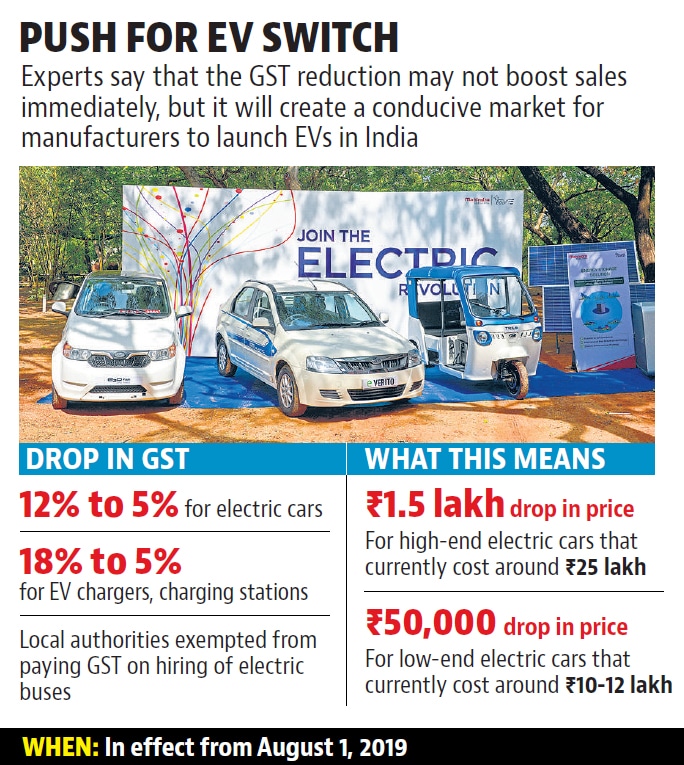 In January, the government reduced the customs duty on EVs that are imported in completely knocked down or semi knocked down state from 15-30% to 10-15%, in an attempt to make it more attractive for foreign manufacturers to ship greener vehicles into the country than those run on fossil fuels, and also encourage them to assemble EVs in India.

In her first budget, Sitharaman in July announced income tax rebates of up to ₹1.5 lakh to customers on interest paid on loans to buy EVs, with a total exemption benefit of ₹2.5 lakh over the entire loan repayment period. India will also set up mega manufacturing capacities for semi-conductors and lithium-ion batteries through competitive bidding, she said.

Saturday’s GST reduction on EVs may not boost sales immediately, but it will certainly create a conducive market and make them a more attractive option for car buyers, an executive at a Japanese automobile company said.

“There are not many options in the Indian EV market. Prices of lower-end cars, currently selling in the range of ₹10-12 lakh, may see a price cut of about R50,000 and the top-end car with a price tag of ₹25 lakh plus may lower its rate by ₹1.5 lakh,” the executive said, requesting anonymity.

Lohia Auto Industries chief executive officer (CEO) Ayush Lohia said prices of EVs are expected to decline by 7%, but couldn’t immediately specify the rate cuts on the range of electric two-wheelers and three-wheelers sold by the company.

Hyundai Motor India national sales head Vikas Jain said the GST rates cut would not only make electric cars cheaper but also make infrastructure affordable because of the significant 13% tax rate cut on chargers and charging stations. A deficient battery charging infrastructure has been blamed for impeding the sales of EVs in the country.

The country has 397,184 battery-operated EVs, said Union minister for road transport and highways Nitin Gadkari, according to a written reply in Parliament on July 9. The highest number of vehicles are in Uttar Pradesh (139,132) and Delhi (75,746 ). These numbers comprises two-wheelers, three-wheelers and four-wheelers. Separate data on the numbers of each type was not mentioned by the ministry. Also, the data provided by the ministry did not include vehicles operating in Andhra Pradesh, Madhya Pradesh and Telangana.

Although the GST Council’s decisions are unanimous, some members have expressed concerns previously that moves to encourage electric mobility may have a negative impact on the automobile industry, which largely makes products that run on fossil fuels. Automobile sales as a whole have slumped for 10 months in a row.

“Given the stress that automobile sector is undergoing, the Council may also want to consider a rate cut for other vehicles (including hybrid vehicles) at least temporarily,” Pratik Jain, PwC India partner and leader, Indirect Tax, said.

The additional tax deduction of ₹1.5 lakh on interest paid for loans taken to purchase EVs is applicable to loans taken on or before March 31, 2023, Sitharaman said, adding that the government wanted to make India a global hub of electric vehicle manufacturing.

“The customs duty reductions on EVs and parts, seen together with the proposed drop of GST to 5%, does indicate a determination to give a decisive push for manufacturing EVs in India. However it needs to be ensured that the rate reductions do not lead to input tax credit accumulation in the hands of the EV manufacturers,” Deloitte India partner MS Mani said.

“There is also a need to clarify whether charging stations would be deemed to be supplying electricity (which is outside the purview of GST at present) or providing a service taxable at 18% . Hopefully, all the tax-related issues will be comprehensively clarified in future,” Mani said.

The Union ministry of road transport and highways in June also proposed to exempt electric vehicles from registration fees .

In a bid to boost EV infrastructure, the Centre had issued an advisory asking all states and Union Territories to create incentives for adoption of EVs by allotting land for charging infrastructure and mandating the installation of chargers in malls, housing societies, office complexes and public parking spaces.

The measures come in the backdrop of Niti Aayog, the government’s policy think-tank, proposing a complete ban on all two-wheelers and three-wheelers powered by internal combustion engines starting in 2025.

According to the think-tank, if India reaches an EV sales penetration of 30% of private cars, 70% of commercial vehicles, 40% of buses and 80% of two- and three-wheelers by 2030, the country can save 846 million tonnes of net carbon dioxide emissions and can also save 474 million tonnes of oil equivalent.