Puneites breathe air that is 4x more dangerous than normal

Experts claim Pune needs at least 30 continuous air monitoring stations; it currently has only five: one continuous and four manual.

Pune has four times more polluted air than the standards set by the World Health Organisation (WHO). The startling revelation came to surface during a discussion at the day-long workshop on Air Pollution: Is The NCAP An Adequate Response To The Crisis. The workshop was organised by the legal initiative for forest and environment (LIFE) and parisar (a civil society organisation working on lobbying and advocacy for sustainable development), on Monday, at PYC Hindu Gymkhana.

RESIDENTS CHOKE AS VEHICLES CONTINUE TO SPURT TOXINS
Emissions from the transport sector will continue to be the highest contributor to the city’s pollution level, unless steps are taken to improve public transport system and reduce vehicular pollution, say experts
FINDINGS OF THE STUDY CONDUCTED BY URBAN EMISSIONSModelled urban average ambient PM2.5 concentration for Pune
56.3 ± 12.9μg/m3
(microgram per cubic metre)National standard for ambient PM2.5 concentration:
40μg/m3WHO guideline
10μg/m3
(Pune’s average is 5 times WHO guideline)
PREDICTIONS
1
By 2030, the vehicle exhaust emissions are expected to remain constant, if and only if, Bharat 6 fuel standards are introduced nationally in 2020, as recommended by the Auto Fuel Policy
2
By 2030, the share of emissions from residential cooking and lighting is expected to decrease with a greater share of LPG, residential electrification, and increasing urbanisation
3
However, since the availability of biomass and coal in the region is high, a fair share of its use is expected to continue, unless an aggressive programme is in place for a 100% technology shift to cleaner options, like LPG and electricity
RECOMMENDATIONS
1
Brick kilns can benefit from a technology upgrade to (for example) zig-zag and fixed chimney kilns in order to improve their overall energy efficiency.
2
Coal-fired power plants need to practice and enforce stricter environmental standards for all the pollutants
3
Open waste burning is dispersed across the city and requires stricter regulations for addressing the issue, as the city generates ever more garbage, with limited capacity to sort and dispose it.BUILDING PROPOSALS THAT WILL HAVE ENVIRONMENTAL COMPLIANCES
◼ Sewage treatment plants ◼ Rainwater harvesting system ◼ Organic waste composters ◼ Dry and wet waste segregation ◼ Energy efficient LED lights ◼ Use of solar power ◼ Plantation of indigenous trees
EMISSIONS INVENTORY FOR PUNE REGION SECTOR WISE (2015) 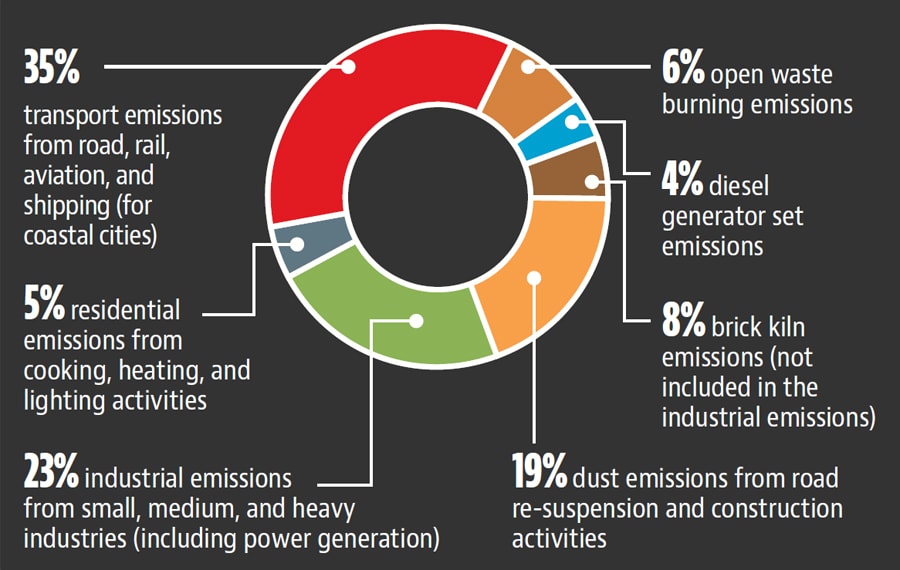 CURRENT STATUS OF AIR POLLUTION IN PUNE AS PER ENVIRONMENT STATUS REPORT 2017
Number of registered vehicles 33 lakh (exceeds population of 31 lakh)Number of two-wheelers -constitute 70 to 75% of vehiclesAIR MONITORINGCity requires at least 30 continuous air monitoring stations to statistically, spatially, and temporally, represent the mix of sources and range of pollution in the city
PMC air monitoring station locations: ◼ Airport ◼ Katraj ◼ Shivajinagar ◼ Camp ◼ ManjariOBSERVATIONS◼ Aggressive promotion of public and non-motorised transport as a part of city’s urban development plan
◼ Improvement of road infrastructure to reduce on-road dust re-suspension
◼ The 150 brick kilns (between Pune and Pimpri-Chinchwad) are majority clamp style, and are fuelled mostly by coal and agri-waste.
◼ There is also 11 sq.km of rock quarries to the west of the city, using in-situ diesel generators and old heavy duty vehicles for operations.
KEY POLLUTION SOURCES IN URBAN AREAS◼ Transport (including on-road dust) ◼ Domestic cooking and heating ◼ Industries ◼ Open waste burning ◼ Influence of outside sources 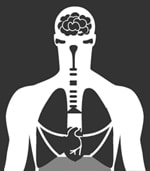 IMPACT OF AIR POLLUTION ON HEALTHCauses respiratory diseases, like lung cancer, heart disease, chronic obstructive pulmonary disorder (COPD) and asthma, depression, type-2 diabetes, alzheimer’s, parkinson’sMAIN OBJECTIVES OF AIR PREVENTION AND CONTROL OF POLLUTION ACT (1981) OF INDIATo provide for the prevention, control and abatement of air pollution.To provide for the establishment of central and state boards with a view to implement the Act.To confer on the boards the powers to implement the provisions of the Act and assign to the boards functions relating to pollution.Source: www.urbanemissions.info/india-apna/pune-india

Particulate matter (PM) - Particulate matter is the sum of all solid and liquid particles suspended in air, many of which are hazardous. This complex mixture includes both organic and inorganic particles, such as dust, pollen, soot, smoke, and liquid droplets.μg/m3 (microgram per cubic metre) - Unit of amount of chemical vapours, fumes, or dust in the ambient air. The concentration of an air pollutant is given in micrograms (one-millionth of a gram) per cubic meter air.Ambient air - Ambient air is atmospheric air in its natural state. It is what we breathe in when the atmosphere is not contaminated by air-borne pollutants.
Graphics: HITESH MATHUR

Experts believe that the amount of particulate matter (PM) in the city air is regarded as the most dangerous urban pollutant as it can penetrate deep into the lungs and enter the blood stream. This can inturn lead to lung and heart-related ailments.

Ritwick Dutta, a noted environment lawyer and managing trustee of the organisation legal initiative for forest and environment who has been creating awareness about the national clean air programme (NCAP), sounded the alarm with air pollution-related statistics.

He said, “ Pune is already showing four times WHO standards of air pollution. What this city requires is at least 30 continuous air monitoring stations, while it currently has only five; four manual and one continuous station, under the PMC.”

Pune had an estimated modelled urban average ambient PM2.5 concentration of 56.3 ± 12.9 μg/m3 in 2017, according to Dutta. “We need to aggressively promote public and non-motorised transport as a part of the city’s urban development plan, along with the improvement of road infrastructure to reduce on-road dust re-suspension,” he added.

He also pointed out that planning at a regional level is important and that the city level action plan is not the right way to handle the issue of air pollution as most of the industrial development takes place outside city limits, and any mitigation plans would exclude these areas.

The workshop was attended by prominent environmentalists, activists and environment lovers who had been passionately combating the rising tide of urbanism which is gradually eating into the green lungs of the city.

Explaining the rationale behind organising the workshop, Dutta said, “The main idea is to make people aware of what inputs they should give for the national clean air programme, launched by the government to sought public comments till May 17, 2018,” adding, “We felt it necessary to hold such workshops as the national clean air programme, is only available on the ministry of environment website in English and can be accessed only on that particular website, with no other agency having any link. Besides, the government on its own has not organised a single consultation, except a single meeting with stakeholders, including the World Bank, the Energy and Resource Institute (TERI) and the government department.”

The workshop on a similar topic was also held in Bhubaneshwar, Chennai, Delhi and Pune.

Mangesh Dighe, PMC environment officer, who gave a brief overview of the rising pollution in the city, said that the vehicle population in Pune had gone up significantly and was one of the important factors which contributed to pollutants suspended in the air for a long time leading to pollution.

“Regional Transport Office (RTO) data from Pune says that, in a year, 2.06 lakh vehicles are registered and annually, it is increasing each year. This is a wake-up call for the residents and all the stakeholders,” Dighe said.

Pollution in the city is at its peak during the summer and winter seasons, while during monsoons they are significantly low, said Mangesh Dighe, environment officer of the Pune Municipal Corporation (PMC).

Dighe was speaking at a day-long workshop, on Monday, jointly organised by NGOs legal initiative for forest and environment (LIFE) and Parisar to highlight, as well as seek comments, on the National Clean Air Action Plan (NCAP) recently announced by the ministry of environment, forests and climate change (MoEFCC). The plan is out for public comments until May 17, 2018. The workshop was attended by environmentalists, activists and experts.

During the workshop, Dighe shared the current status of air pollution in Pune as per the environment status report 2017, which stated the number of registered vehicles in the city to be around 33 lakhs; exceeding the population of 31 lakhs. The report also highlighted that two-wheelers constitute 70 to 75 per cent of the total vehicles.

He was of the opinion that public transport should be strengthened in order to control the number of vehicles on the road which will help reduce vehicular pollution.

Sujit Patwardhan, founder member of Parisar, stressed on the need for questioning the path of development India is following. “We are heading towards a car-oriented society, and hence, there is a constant demand for flyovers and wider roads. The maximum requests for cutting trees in Pune comes from the road department, and yet there is little support to improving the public transportation in the city.”

Patwardhan stressed on the need for doing away with a car-oriented approach and suggested implementing alternative modes of transport to curb the rising level of pollution and urban chaos in Pune.

Dust, diesel are among the top air pollutants, said Sunil Dahiya, senior campaigner, green peace NGO. Dahiya, who spoke about the collective efforts of the NGO towards reducing air pollution in Pune, at Beijing, China, said, “Dust, diesel, increasing registration of vehicular population and solid waste are some of the pollutants adding to severe air pollution.”

Dahiya, who was speaking at the workshop on the national clean air programme, began with a presentation on air pollution beyond Delhi – NCR and cited examples of Beijing that was working on reducing air pollution.

Ritwick Dutta, managing trustee for the organisation, legal initiative for forest and environment, said that India ranks 177 out of 180 in the list of polluted countries, while 14 out of the 20 most polluted cities from across the world are from India, revealed the WHO global air pollution database. This is alarming and all of this is on a rise due to the weak rules of the Air Prevention and Control of Pollution Act (1981) of India, said Dutta.

The Act was created to take appropriate steps for the preservation of the natural resources, which among the other things includes, the preservation of high quality air and ensures controlling the level of air pollution, although there is no provision of rigorous penalty system in place. The objectives of the Act were to evolve effective and proficient ambient air quality, have proper monitoring network across the country and have reliable database.

They were also to include public outreach for implementation of policies on air pollution and to have a feasible management plan for prevention, control and abatement of air pollution.

“If one looks at the state environment clearance board(ECB), they have granted 121 clearances and 82 per cent are in the building and construction sector above 20,000 square metres, where Pune is the highest followed by Mumbai,” said Dutta.

The health session was conducted by Manas Ray, former head, department of experimental haematology, Chittarajan National Cancer Institute, who stressed upon the carcinogenic elements that were found in air pollution. “We conducted research even on incense sticks. One incense stick is equal to 10 cigarettes a day. Even non smokers complain of anaemia and allergies as a result of being exposed to air pollution,” said Ray.

Monsoon in Pune from June 11, but heat to continue
Read more