The analysis, by remote sensing and landslide experts of Centre National de la Recherche Scientifique (CNRS), points to specific areas in Joshimath which witnessed maximum sliding (or subsidence) in the last four years.

A fresh analysis of satellite imagery of Joshimath between 2018 and 2022 has shown that the eastern part of the holy town witnessed maximum subsidence with an average displacement of around 10 cm per year, reiterating what the Indian Space Research Organisation (ISRO) said.

The analysis, by remote sensing and landslide experts of Centre National de la Recherche Scientifique (CNRS or National Centre for Scientific Research, which is the French state research organisation and largest fundamental science agency in Europe), Ecole et Observatoire des Sciences de la Terre Strasbourg (School and Observatory for Earth Sciences, an institution under the supervisory authority of the University of Strasbourg France and CNRS) and Aristotle University of Thessaloniki, Greece, was released on Thursday. 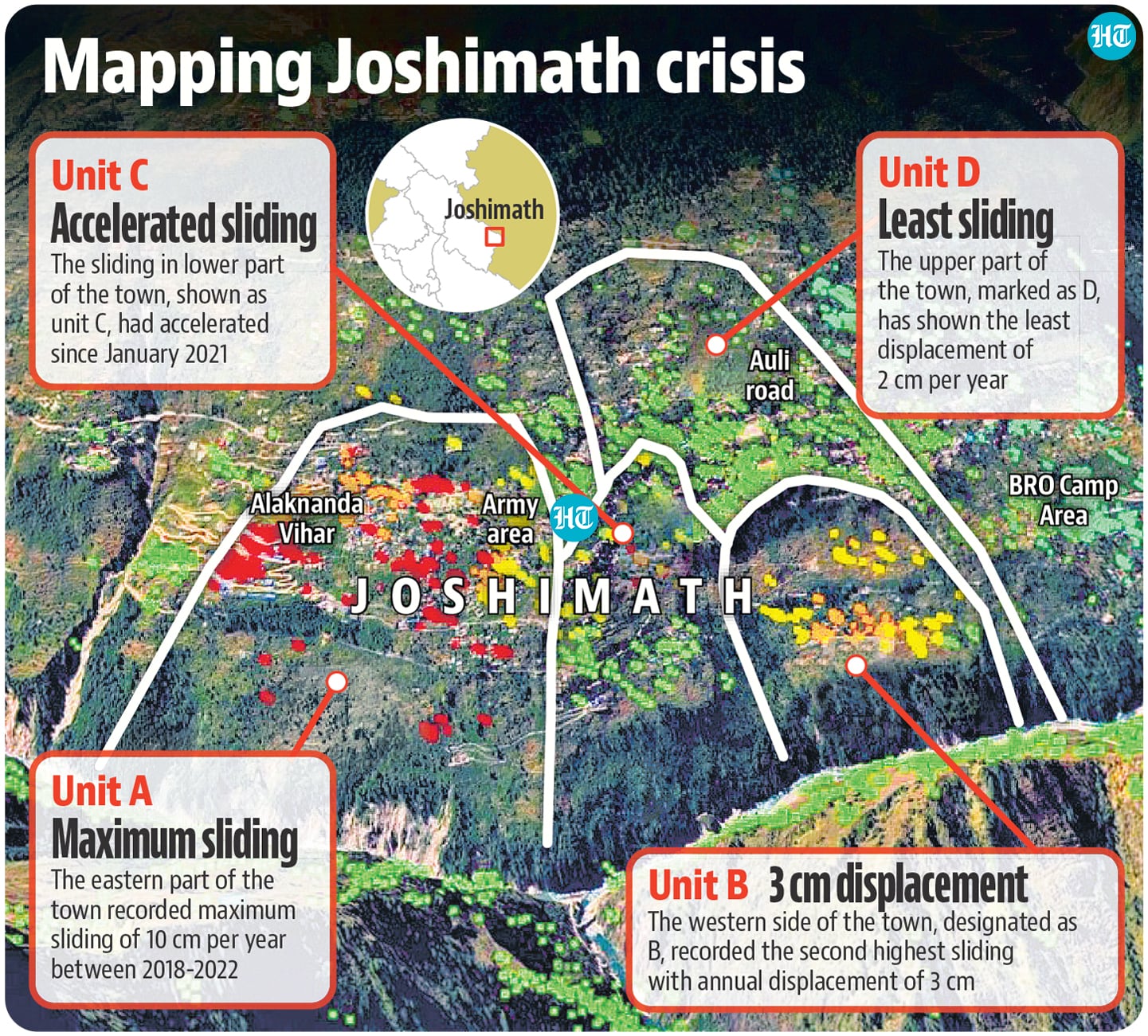 The sliding in lower part of the town shown as unit C, had accelerated since January 2021, the research shows. The upper part town of the town marked as D has shown the least displacement of 2 cm per year, it adds.

“It appears that two zones (eastern and western parts of Joshimath designated as A and B in the satellite image) have been continuously moving in the past four years (2018-2022) on the downhill part of the slope. The surface displacement rates are higher in the eastern part of the slope (unit A) with a value exceeding 10 cm per year for the period 2018 to 2022,” the research paper said.

Following an acceleration in subsidence in early January, the state has been forced to relocate people, and embark on a planned demolition of the worst affected commercial structures.

The analysis said that subsidence has accelerated in the eastern, western and lower parts of Joshimath town since December 22 but did not provide data on how much the town has sunk since then. Residents of Joshimath intensified their protest since mid-December when cracks started appearing in their homes.

The findings are consistent with the latest analysis of satellite images of the area by Indian Space Research Organisation (ISRO) and recent field observations.

According to two reports of the ISRO’saffiliates, National Remote Sensing Centre (NRSC) and the Indian Institute of Remote Sensing (IIRS), land subsidence in Joshimath increased rapidly especially in the 13-day period between December 27 and January 8 when the holy town witnessed a subsidence of 5.4 cm.

YP Sundriyal, a geologist from HNB Garhwal University, Srinagar said the fresh analysis by international experts confirms what locals have been saying since last year. “The subsidence rates have increased in December and the first week of January, which is consistent with the cracks in 849 houses and ground fissures that have been reported from Joshimath. The government should use this data for long-term planning for Joshimath and evacuate people from the area at the earliest”.

Atul Sati, convenor of Joshimath Bachao Sangharsh Samiti (JBSS), said the new analysis by international experts has made it clear how acute the Joshimath crisis is.