It will likely take three to four years to manufacture enough vaccines to cover the world’s population, but high-income countries and a few middle-income countries with manufacturing capacity such as India, have already purchased nearly 3.8 bn doses.

India has used its manufacturing capability to pre-order 600 million doses of the coronavirus disease (Covid-19) vaccine and is negotiating for another billion doses, enough to vaccinate at least half the population, according to a new global analysis of advance market commitments (AMCs) for experimental vaccines till October 8. Most experimental Covid-19 vaccines require two doses.

The figures are second only to the US, which has pre-ordered 810 million confirmed doses and has another 1.6 billion under negotiation.

It will likely take three to four years to manufacture enough vaccines to cover the world’s population, but high-income countries and a few middle-income countries with manufacturing capacity such as India, have already purchased nearly 3.8 billion doses, with options for another five billion, showed an analysis of purchasing agreements for Covid-19 vaccines by the US-based Duke Global Health Innovation Center.

“India is producing vaccines to protect the world against Covid-19, why shouldn’t it ensure its own citizens are protected as well? The government is committed to protecting the health of its citizens, so all measures have been taken to ensure we get adequate doses of the vaccines when they are available,” said a senior Union health ministry official, requesting anonymity.

Since none of the experimental vaccines yet have regulatory approval, countries are hedging bets by purchasing multiple candidates and some part of these doses may never materialise. The UK, for example, has made AMCs with five different vaccine candidates, using four different vaccine technologies.

Future agreements under discussion by the EU raise that number of vaccine doses to almost two billion, while the US, which has pre-ordered doses to cover 230% of its population, could eventually control 1.8 billion doses — about a quarter of the world’s near-term supply — according to the analysis. 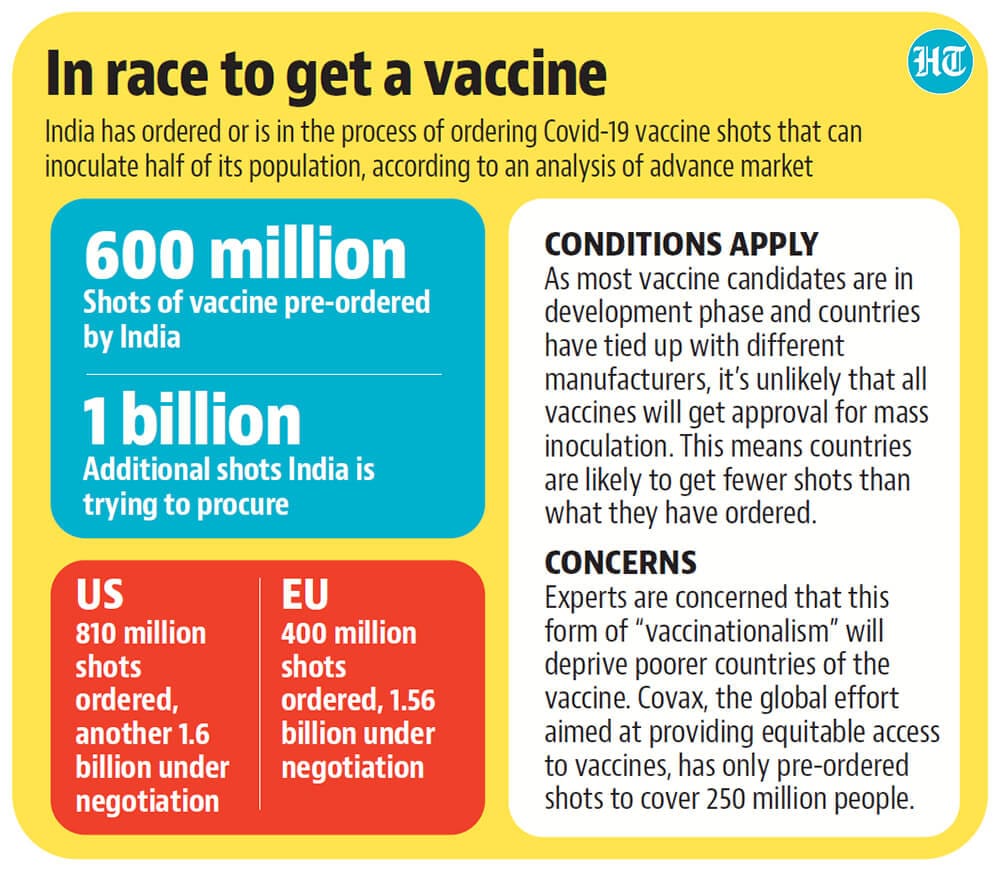 This “vaccinationalism” will lead to some countries being able to vaccinate their entire populations — and some many times over — which is likely to deny low-resource regions, such as sub-Saharan Africa, access to Covid-19 protection until 2024.

Only enough doses to cover 250 million people have been confirmed as purchased thus far by Covax, a global effort involving both wealthy and poor countries that has promised equal access to Covid-19 vaccines globally. To meet its goal of vaccinating at least 20% of member countries, COVAX would need at least 1.14 billion doses of a single-dose vaccine and twice that amount for a two-dose regimen.

Covax signatories, which include the UK, the EU and Canada but not the US, are effectively undermining the pact by negotiating “side deals” for vaccines that will affect equitable access, said the study.

“An ambitious effort to create a global system of vaccine equity is being undermined as a handful of countries, including those who made a commitment to equality, secure as many doses as they possibly can,” said Elina Urli Hodges, MSPH, who leads the Launch and Scale Speedometer, an initiative that identifies impediments to delivering health innovations to low-income countries.

No low-income country has made a direct agreement to purchase, suggesting that they will be limited to the Covax pact to secure vaccines.

Other countries such as Brazil are also using their manufacturing capability to negotiate large AMCs with leading experimental vaccine candidates, while countries such as Peru are participating in phase 3 clinical trials to get leverage to negotiate AMCs, found the analysis, which used available evidence from public sources until October 8 combined with interviews with global and regional vaccine experts, as well as ministry of health officials in select countries.

“It is understandable that countries are acting in their national interest; they are incentivised to focus first on the safety of their populations. But globally, this will deepen existing inequities, and prolong the pandemic. Our research points to the need for countries and multilateral funders to unlock additional manufacturing capacity (particularly in the Global South) and invest in preparing countries for effective distribution of vaccines. High-income countries should also work with COVAX, as a global coordinator, to ensure that, once their populations are covered, excess doses are redeployed where they are needed most around the world,” said Taylor, in an email.