How crowdsourced archives are making Indian history personal and accessible

A collage of faded pictures shows an Anglo-Indian girl, Margurite Mumford, happily posing for the camera. In the only black-and-white image among them, she is seen sitting cosily with a man on the bumper of a vintage car.

In the accompanying text, Jason Scott Tilly, a UK citizen, narrates how the love story of his late grandfather, a press photographer, came to light in 2006, when he came across some pictures in his grandparent’s cupboard. “I will never be sure if my grandfather, Bert Scott, would have wanted me or anyone else to find these negatives. He had after all kept them very safe, hidden from the moment he left India,” Jason writes about his grandfather who emigrated during the Partition.

Based on what he saw in the photos and a few leads, Jason found out that the pictures were taken in Ooty and Bombay where the couple spent time together in the 1930s.

Jason was able to contact Margurite’s daughter, Alecia, who lived with her in New Zealand.

“Is Bertie here?” said Margurite, who had turned 96, when Alecia showed her Scott’s picture.

Titled “My Grandfather’s Secret”, it is the most popular story on the Indian Memory Project, an online archive that traces the history of the Indian subcontinent through images and stories contributed by people around the world.

Online initiatives such as the Indian Memory Project, The Citizen’s Archive of India (CAI) and 1947 Partition Archives, along with Instagram handles – Brown History and Gulf South Asia, SOAS Postcards – present history in an accessible, unacademic form. They combine an ever-increasing interest in personal stories with modern storytelling techniques to document bygone times.

In one such story, Vishwanath Sachdev, a journalist who migrated from West Pakistan to India during the Partition, shares his memories of the 1957 general elections. “People were still thrilled about the newly-attained Independence and they immensely valued the power of their votes. Election did not have a negative connotation attached to it back then,” he recalls as we see a montage of black-and-white images of election-day superimposed on his voice. Mrs Bhatia’s first carThis photo was taken at the Willingdon Sports Club (Mumbai) in 1964. It shows Mrs Pushpa Bhatia, a Mumbai resident, with the first car she bought, a Morris Minor. In the story shared with The Citizens’ Archive of India, she writes, "I bought it second-hand, and my in-laws, who were well-to-do, asked me why I wanted to drive this around when they had a fleet of cars for me to use. But I had always wanted to buy a convertible, and I didn’t mind that it was second-hand."
Picture Courtesy/The Citizens’ Archive of India, Pushpa Bhatia’s collection What we wore One of the sections of the Sarmaya collection documents how clothing in the Indian subcontinent has evolved. Seen above is a photo from the album Musicians and Dancers, shot by Gobindram and Oodeyram of Jaipur, 1880s. Mumbai- based banker Paul Abraham launched Sarmaya in 2014. The material — documents, images, book covers, miniature paintings, coins — is from Abraham’s personal collection.
Courtesy: Aditi Rao/Sarmaya.in

More than 375 hours of interviews and 1,300-plus items, including letters, newspapers, documents, personal and historical pictures keep the project growing. “It is a great learning experience not only for people visiting the site but even for those who run the project,” says Malvika Bhatia, archive director, CAI. “We think that the changes happening in our times are unprecedented. Oral history tells us that the previous generations fought for many things which we now take for granted: voting rights, education, and participation of women in the workforce,” she says.

BEFORE THE DIVIDE
Guneeta Singh Bhalla, who founded the 1947 Partition Archives, is left equally amazed when she spots patterns in more than 9,000 stories which form the archive, which was launched in 2011. “A key takeaway of our work is that the subcontinent was very much cosmopolitan before Partition. There were women who owned and drove cars and bikes. We may think that everything pre-Partition was archaic. That is not the case,” she says.

The archive has documented the personal story of Vilayat Khan, veteran exponent of dhaddi music in Punjab. Born into a family of balladeers, Khan had to leave his village, Goslan (East Punjab), and migrate to Sargodha in Pakistan. He lost interest in singing and did menial jobs. After ten years, Khan and his father returned to settle back in their village which was now a part of India. Khan started singing again. He went on to become a renowned artiste in the country and received the Sangeet Natak Akademi award in 2009.

When the archive achieves the 10,000 stories target, Bhalla and her team plan to establish a public memorial. “ The purpose is to build empathy, become more inclusive and avoid intercommunity tensions,” she says.

INDIA AND THE GULF
In March 2019, Bengaluru-based writer Ayesha Saldanha started an Instagram account which documents the ties between the Gulf region and South Asia. The repository is made of material from Ayesha’s research as well as items contributed by people of all ages.“I hadn’t anticipated that the younger generation of South Asians who grew up in the Gulf would be so happy to be able to tell their stories to a wider audience,” says Ayesha.

The first thing which comes to mind when one thinks of this particular account is people from South Asia settling in the Gulf. But one of the objectives of the account, says Ayesha, is to document the reverse: the history and stories of Gulf Arabs in South Asia.

A black and white image shows Muhammad Salem al-Sudairawi, one of the wealthiest Arabs in Bombay, posing with his family at his summer home in Poona in 1918. A secret love Seen above is a collection of pictures discovered by UK citizen Jason Scott Tilly in his grandparents’ cupboard in 2006. In one of the pictures, Jason’s grandfather, Bert Scott, is seen with his Anglo-Indian girlfriend, Margurite Mumford. Based on a few notes accompanying the photographs and internet search, Jason managed to establish that as teenagers, his grandfather and Mumford dated during the 1930s. Their story was cut short as Bert and Margurite had to flee India with their respective families during Partition. Jason traced a 96-year-old Mumford’s family to New Zealand and sent them some of her old pictures.
Image & Narrative contributed by Jason Scott Tilly, United Kingdom. 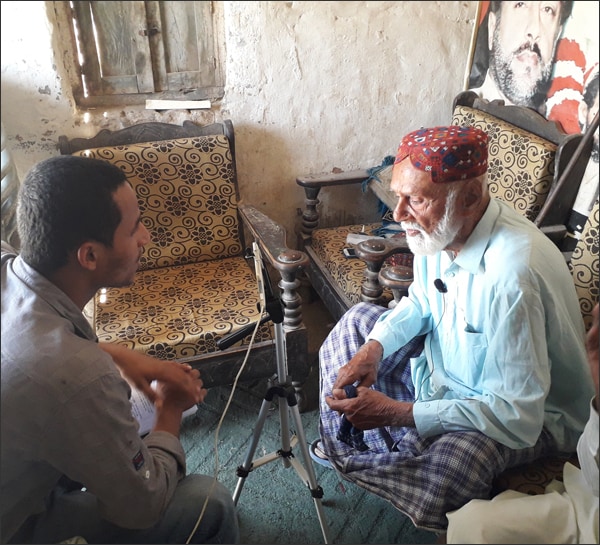 Ghost of the pastIn an interview given to the 1947 Partition Archives, Muhammad Panah Mastoi (right), a resident of Sindh, Pakistan, shared what he witnessed during Partition. "People around us were fleeing, fearing for their lives and dignity. We were informed about Partition by those who lived in the bigger cities," recalled 89-year-old Mastoi in the interview in 2019. Mastoi saw people coming from Punjab (India), settling in Sindh. "They had no food or proper clothes," he said. Mastoi remembered that the villagers were elated about the prospect of living in an independent India, but they were also worried because their neighbours were leaving.
Murtaza Kharani interviewed Mastoi for 1947 Partition Archives.

Then there are enterprises that were originally started as passion projects. As a child, banker Paul Abraham received a few Travancore coins from his father to connect him to his roots as a Malayali. As his interest in coins and mints grew, Abraham began to learn Urdu and spent time looking for old maps. In 2014, he launched Sarmaya, his digitised collection of paintings, personal stories, books, artwork, photos, artefacts, maps, coins and more. “Both my wife and I were keen that the collection be made public. She passed away due to cancer. I set up Sarmaya in her memory,” says Abraham.“The value of Sarmaya for me lies in the stories behind the works I’ve acquired. My personal journey is somewhere embedded in them.”

THE CHALLENGE
Archiving personal histories and classifying them under various themes and genres is a challenge. Where should one start? What should be included? What can be left out? How to make the project sustainable? These and many other questions keep popping up. For the Indian Memory Project, founder Anusha Yadav decided to consider only pre-1992 photographs and documents. “I gave the 1991 cap because people usually have more objective memories of longer time spans gone by. To me, a couple of decades seemed right. It also gave me the bandwidth to focus on older images. Maybe, soon I can tell people to make submissions from the year 2000,” says Yadav.

Of course, such memory projects cannot replace the work of the historian. Manu S Pillai, the author of The Ivory Throne and Rebel Sultans believes that there isn’t much scope for scholarly analysis with such posts on websites and Instagram handles, but they do fill a gap and “give life” to things we read about and learn in the abstract. “Research and analysis is still heavy business, but social media helps generate an appetite for history beyond scholarly circles, and any such mass interest is, in the long run, a positive development,” says Pillai.

Confirmed! Poco’s new phone is coming to India soon with these features