Priyanka Chopra shared a picture and a video to celebrate her late father’s birth anniversary. See them here.

Priyanka Chopra on Thursday celebrated her late father’s birth anniversary with her mother, Madhu Chopra, by cutting a cake in his honour. The actor also shared a tribute video on her social media accounts, and captioned it, “Dad. U r so missed. Happy birthday. Always and forever.”

Priyanka’s father, Ashok Chopra, died in 2013. The actor has always been open about her love for her father, and the difficulties she faced in coping with his loss. She even has a tattoo with the words ‘Daddy’s lil girl’ written on her forearm.

The video she shared online shows a collage of her father’s photos over the years — from newspaper clippings to old black and white pictures. 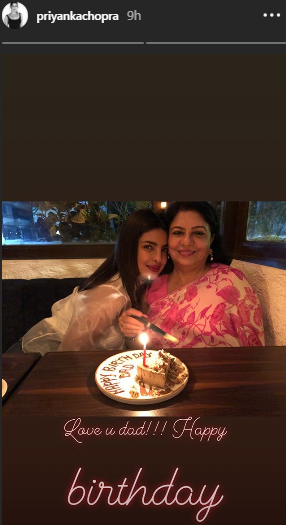 In a picture she shared on her Instagram stories, Priyanka can be seen resting her head on her mother’s shoulder with a cake in front of them. The words ‘Happy birthday dad’ can be seen on it, as a candle flickers. Priyanka noted that the picture had been taken by Janhvi Kapoor.

Priyanka, her mother and Janhvi were spotted arriving for the small celebration by the paparazzi. In the pictures, Priyanka can be seen wearing a white T-shirt, a sheer jacket and blue jeans.

In June, to mark her father’s death anniversary, Priyanka had shared another video. “My dad was my best friend, my idol and my protector. He was the man of my life,” she said in the video. “I was very close to my father, he was my superhero, my idol. I wanted to grow up and be him. He was a musician, he used to perform on stage, he was a surgeon, he was an artist, he was the life of a party, gregarious laughter, extremely confident man.”

Priyanka recently got engaged to singer Nick Jonas in Mumbai. Pictures from her intimate engagement ceremony and subsequent parties were shared online.