In 2019, the Supreme Court had asked Punjab, Haryana and Uttar Pradesh to pay Rs100 per quintal of crop as an incentive to paddy farmers who have not burnt stubble on their fields, but that plan hasn’t been implemented yet.
Share Via
Copy Link
Hindustan Times, New Delhi | ByJayashree Nandi

With farm fires flaring in parts of Punjab and Haryana, the Centre has called a meeting of several states’ environment ministers on October 1, which will also be attended by state pollution control boards and municipal authorities, to review air pollution control measures states and Centre formulated in 2016. However, senior officials warned that prevailing discontentment against the farm bills may render tackling stubble burning an uphill task this year as well.

Officials of the Punjab Pollution Control Board said 350 stubble fire cases have been identified in the state since September 21 this year, even as month-long trials of the microbial consortium — developed by Indian Agricultural Research Institute, are underway in the state, as well as Haryana. The consortium helps decompose stubble without the need for straw management machinery — the purchase of which is a major hurdle for small and marginal farmers, thereby hindering the mitigation of stubble fires.

In 2019, the Supreme Court had asked Punjab, Haryana and Uttar Pradesh to pay Rs100 per quintal of crop as an incentive to paddy farmers who have not burnt stubble on their fields, but that plan hasn’t been implemented yet.

Punjab is in talks with Centre to make funds available for the incentive.

“The Punjab government has sought the Centre’s support for the incentive. The government is very serious about tracking down violators. Around 8,000 people have been deployed at the village and district levels to track fires. Machinery is being made available to all farmers, especially marginal farmers,” said Karunesh Garg, Punjab Pollution Control Board (PPCB) member secretary. 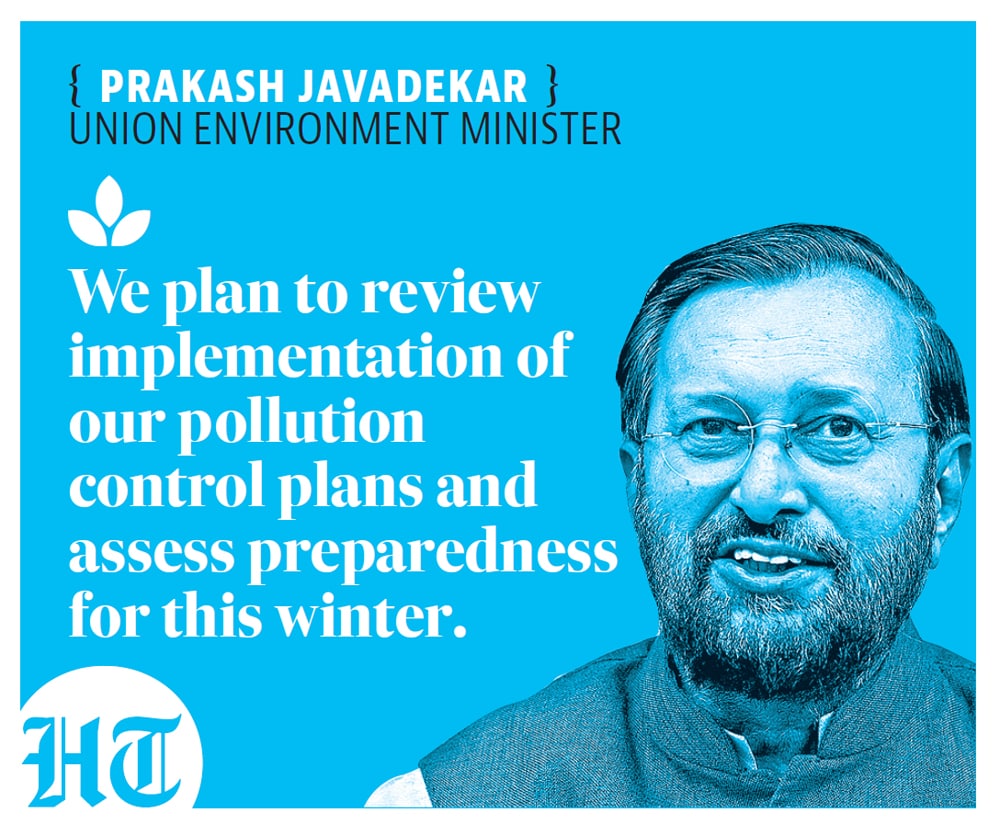 Just around 25% of farmers in Haryana have access to straw management machinery, senior state officials said.

“We are providing subsidised equipment to individuals and cooperatives for the in-situ management of crop stubble. We are also providing ₹1,000 per acre subsidy for farmers choosing ex-situ options (like using for fodder). Our assessment is that 25% farmers have access to straw management machinery. For marginal farmers even rentals are not being charged by cooperative societies. So, we are expecting a reduction in fires,” said Sanjeev Kaushal, additional chief secretary of Haryana’s agriculture and farmers’ welfare department.

Javadekar on Tuesday said he will speak about the farm bill agitation and the issue of air pollution from stubble fires separately and said the two are not to be discussed together. “We came up with short-term, medium term and long-term plans to control pollution in 2016. We plan to review implementation of those plans and assess preparedness for this winter,” Javadekar said.

He added that two meetings with northwestern states was also held in the past month — one headed by the cabinet secretary, and another by the principal secretary to the Prime Minister. Javadekar said the Centre had accepted the air pollution problem and brought out policies to deal with it over the past four years.

“The PM brought out the national air quality index (NAQI) so that people can easily understand pollution levels. The Badarpur power plant was shut down, the Sonepat thermal power plant was also phased out, we built the peripheral expressway which was pending for 15 years. The Eastern Peripheral Expressway ensured that 60,000 trucks which passed through Delhi polluting it to reach other states could bypass Delhi, BS- 6 emission standards have been introduced and BS VI fuel is also available. We introduced the Waste Management Rules, 2016, which include rules for construction and demolition waste, 3000 industries in NCR have got piped gas supply. So, we are working on all fronts,” Javadekar said, adding that ICAR will conduct various trials this year to curb crop stubble burning.