As Indians live longer, the physical and mental health of the elderly, and the attendant costs of maintaining it over a longer period of time than ever before, is coming into focus.

In 2019-20, 2.6% of Indians in the 30-44 years age group were admitted to a hospital, according to the Union ministry of health and family welfare. For those aged 60-69 years, the proportion was three times that. And for those over the age of 70, that figure was 11.1% . As Indians live longer, the physical and mental health of the elderly, and the attendant costs of maintaining it over a longer period of time than ever before, is coming into focus.

With more than half of India’s elderly living with their spouses and family members (National Sample Survey 2017-18), this also raises questions about care-giving responsibilities . Health expenditure in India is largely financed by households themselves. As of 2017-18, according to the Longitudinal Aging Study in India (LASI) Wave 1, the mean out-of-pocket expenditure for elder citizens for their last in-patient visit was ₹8,028 in a public health facility and ₹31,933 in a private health facility.

Increasing life expectancy, along with a decline in fertility rates, is causing India’s population to age. Between 2021 and 2031, the share of those over the age of 60 in India’s population is expected to increase from 10.1% to 13.1%. While Indians live on average for 69.8 years, this is much lower than other populous countries. According to World Bank estimates, of the 29 countries with a population greater than 50 million, India ranked 21 in life expectancy in 2020. Japan topped the list ( 84.6 years), followed by South Korea (83.4).

Still, life expectancy in India has been continuously increasing for both genders. According to government data, between 1970-75 and 2014-18, the life expectancy of men has increased from 51 to 68 years, and that of women, from 49 to 71 years. Interestingly, women in India have been living, on average, longer than men beginning 1991-95. Further, Indians in urban areas live longer than those in rural ones (73 years versus 68 years). 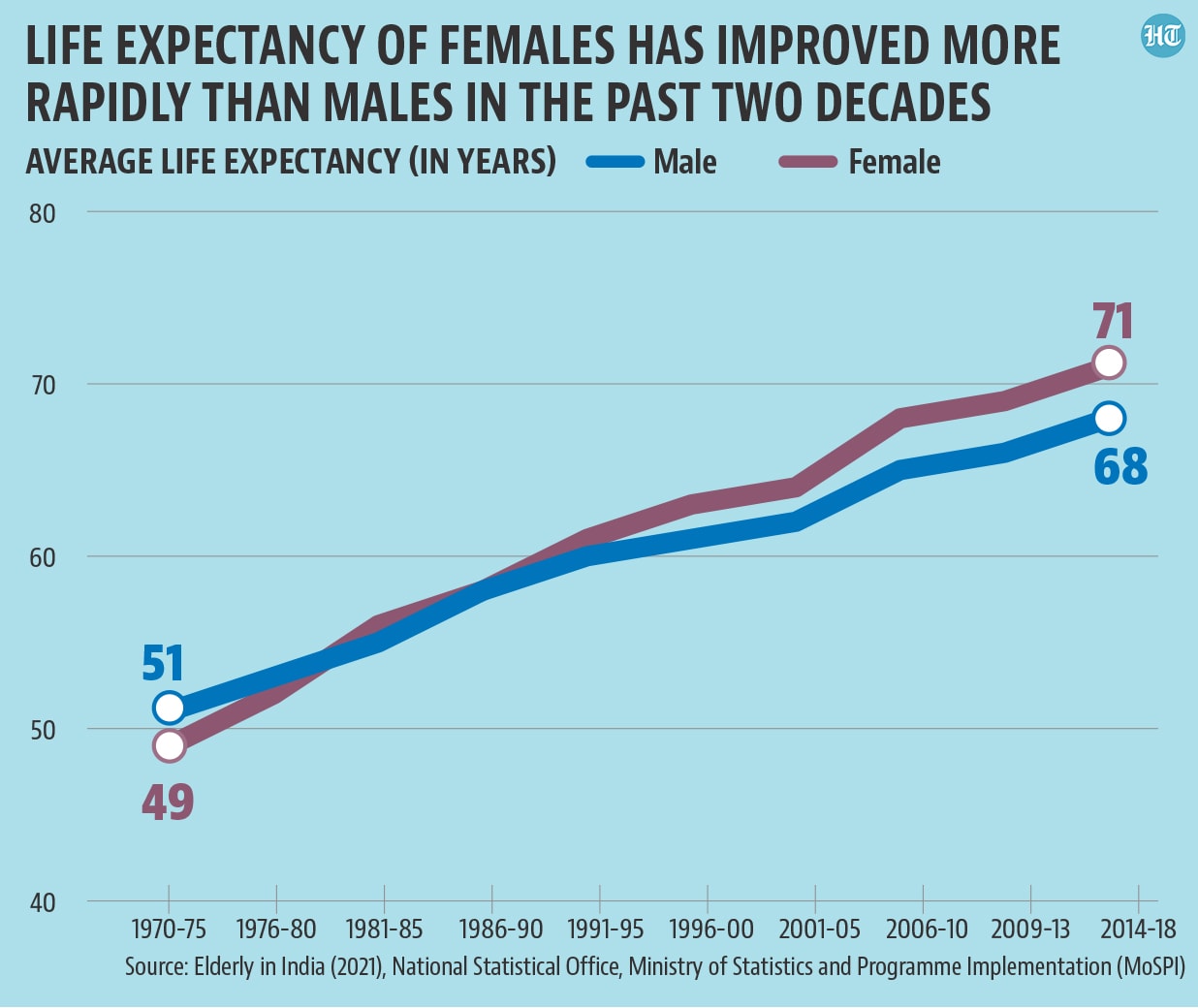 As Indians live longer, they also face more instances of health vulnerabilities. In 2017-18, a quarter of the country’s elderly reported they were ailing. Chart 2 shows the proportion of persons that responded as ailing (PPRA) among the 60+ population for each state. Derived from NSS 2017-18, PPRA was defined as the “estimated number of persons in the population reported ailing” in a 15-day period as a proportion of the “estimated total population of the group” obtained on the basis of survey data. 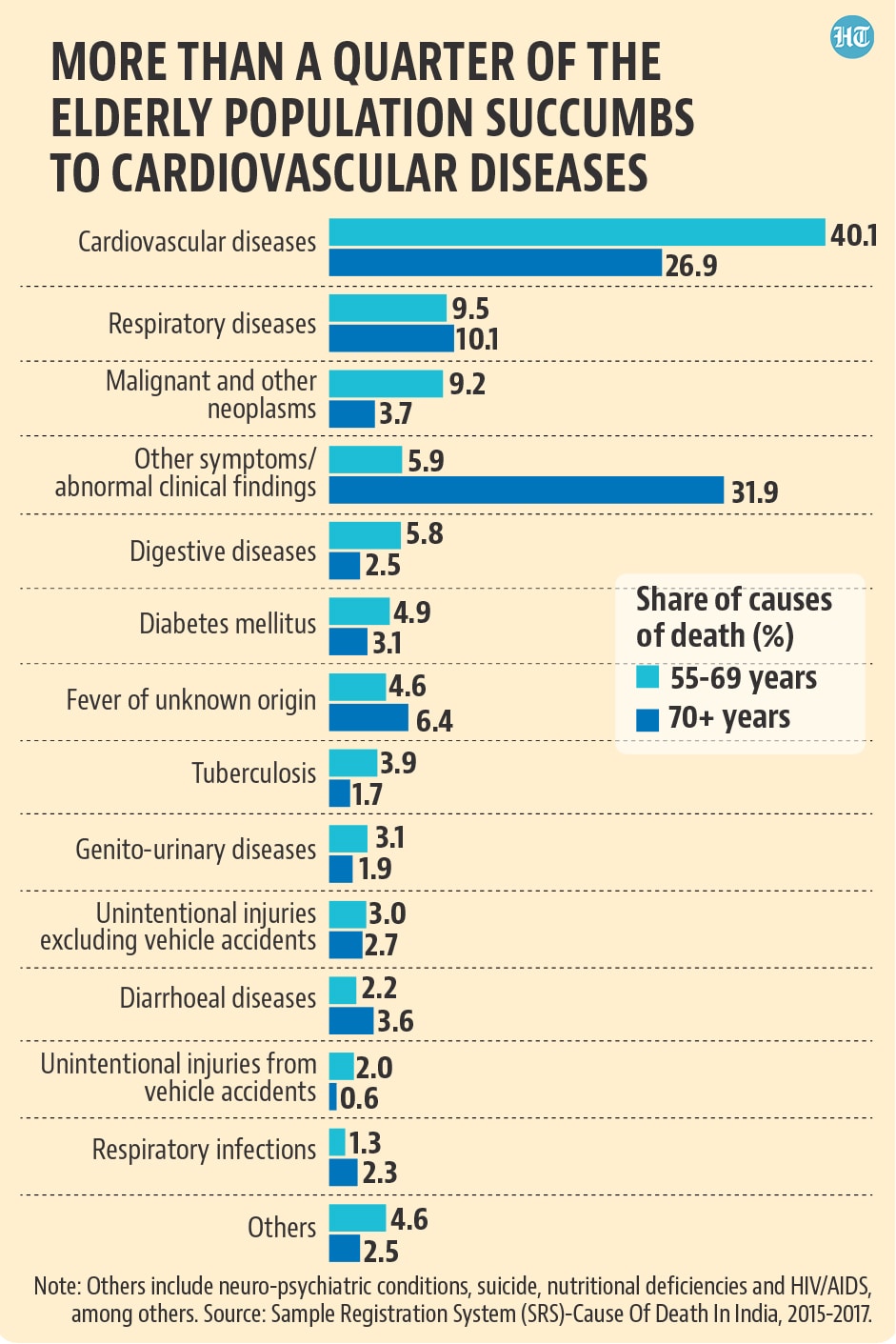 PPRA among people aged 60+ is the highest in Kerala (62.5%), followed by Andhra Pradesh (55.7%) and Lakshadweep (54.6%). In 14 states and Union territories, more than a quarter of the elderly population reported health issues. The figure was lower in the northeastern states. Some of this variance, the survey added, could also be ascribed to reporting and cultural issues .

Of the broad causes of death, the elderly in India are most likely to die of non-communicable diseases, especially cardiovascular diseases. This is especially true for those in the age group of 55-69 years, where cardiovascular diseases account for about 40% of deaths. For elders above the age of 70, the biggest cause of death is ill-defined symptoms and abnormal clinical findings. This ties in with the findings of the 75th Round of NSS conducted in 2017-18. As much as 32% of the urban elderly and 18% of the rural elderly were reported as likely to be afflicted by cardiovascular issues. Closely following were endocrine/metabolic diseases (26% among urban elders and 10% among rural elders). However, the gravity of these afflictions should be discounted, as 94.5% of men and 90.5% of women also reported as being “physically mobile”.

Mental health issues among the old

Moving beyond physical health, there are various indicators to gauge mental health issues that befall the elderly in India. One such indicator is suicide data. While the suicide rate has remained nearly constant for the elderly in the past two decades, the share of men contributing to it has been much higher than women. In 2021, 76% of elderly suicides were attributable to men. 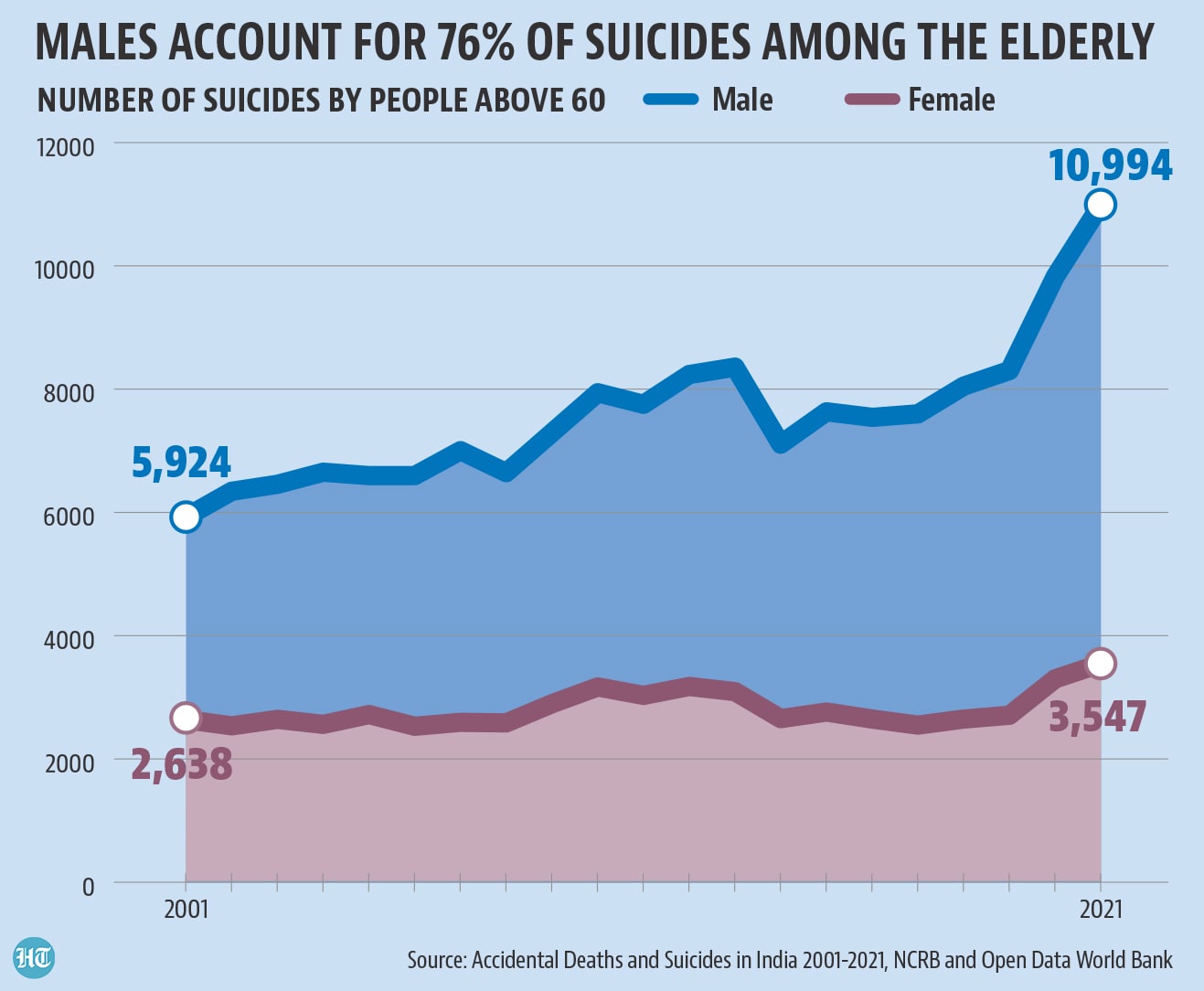 LASI Survey Wave-I provides more nuance to the issue with information on symptoms of depression. Survey data from 2017-18 indicates that 30% of those aged 60 and above screened positive for depression symptoms on a self-reporting scale. A higher proportion of the elderly residing in rural areas (31%) screened positive for depression symptoms than in urban areas (27%). With the number of elderly in India set to surge in both absolute and relative terms, these are issues of import the country will face with greater frequency.

This is the concluding piece in a two-part series on India’s elderly; Payoja Ahluwalia is a Hindustan Times-How India Lives data journalism fellow.