Authorities in Madhya Pradesh’s Khargone city on Monday arrested 84 people and demolished 50 structures owned by men accused of stoking violence during a Ram Navami procession the day before, triggering allegations that the administration was bypassing legal due process.

Violence broke out on Sunday evening as a Ram Navami procession made its way past a mosque. In the ensuing stone pelting and clashes that lasted three hours, at least a dozen houses, vehicles and shops were burnt and 27 people were injured, said police. Hindu groups blamed the Muslims for the violence even as several local residents alleged that the procession was playing objectionable songs that sparked a heated argument, leading to acrimony. 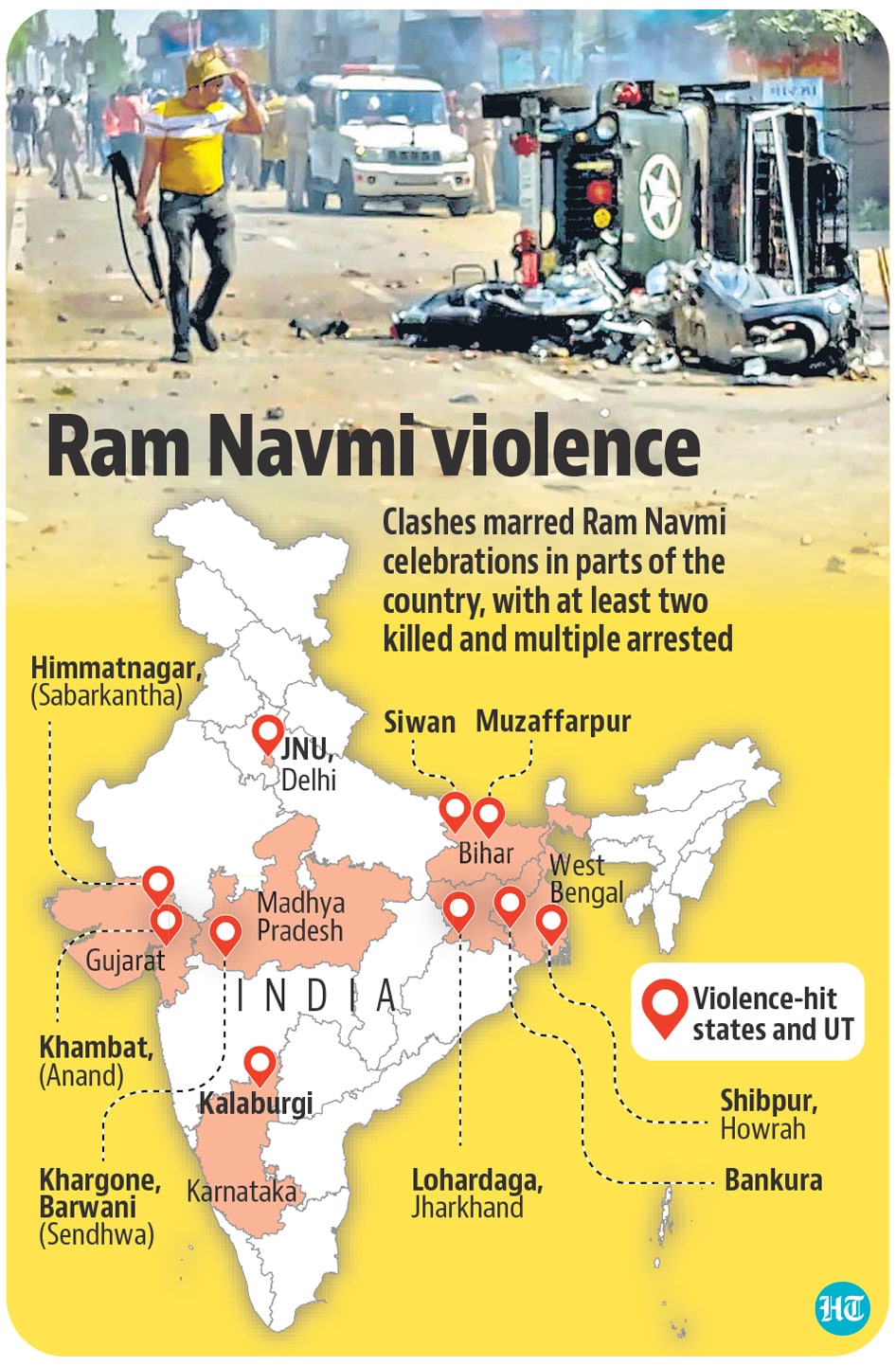 “Those who pelted stones and created the ruckus will not be spared and their houses will be turned into ruins. No one will be allowed to create disturbance in the state,” state home minister Narottam Mishra said. The state government will recover damages from the guilty, he added.

Chouhan said a state tribunal will be formed to recover damages from the guilty.

“In Madhya Pradesh, we have passed the Prevention of Damage to Public and Private Property and Recovery of Damage Law. The rioters of Khargone will not only be punished, but the damages will also be recovered from them. The state government is setting up a claims tribunal for this,” he added.

Images of houses and shops being razed by bulldozers were beamed by television channels for most of the day, strengthening the perception that CM Chouhan was attempting to take a more strident law-and-order stand. His counterpart in Uttar Pradesh, Yogi Adityanath, leveraged his tough- on-crime image to a historic assembly election victory last month. Bulldozers were often parked outside his election rallies to drive home the point that “bulldozer baba” -- as local BJP leaders called him -- was unsparing to criminals.

A senior police officer said that a joint team of police, district administration and municipal corporations razed four houses in Mohan Talkies area on Monday afternoon and identified 50 other, which they said were allegedly constructed illegally. All the houses were in the worst-affected areas of Khaskhaswadi, Anand Nagar, Motipura, Sanjay Nagar and Talab Chowk -- Muslim majority areas.

Khargone district collector Anugraha P said, “The illegal constructed houses included constructed on the government land and without building permission have been demolished.”

Experts said the demolitions may not have been lawful. “Under Article 21 of the Constitution of India, the rights of the accused include the right to a fair trial, get bail, hire a criminal lawyer, free legal aid in India and more; But now, the MP government is violating this right by demolishing houses. Even if the houses were constructed illegally, there is a procedure in the rules of every corporation of giving prior notice before demolition, but no such due procedure is being followed by the state government,” said Supreme Court advocate Ehtesham Hashmi.

Mishra said the demolition was according to the law and blamed the Opposition. “After losing the election in the four states, such tension is being created to disrupt the peace. We will identify every miscreant and will expose everyone,” he said.

Sunday’s violence left superintendent of police Siddharth Chaudhary and five other police personnel injured. District collector Anugrha P clamped a curfew at four places in the city on Sunday evening but as the clashes spread, the whole city was put under prohibitory orders on Monday.

“The violence broke out when the procession was passing from Talab Chowk at 5.30pm on Sunday. A group of people pelted stones on the rally and tension erupted. In three hours, more than a dozen houses, vehicles and shops were burned down by unidentified people. The SP Chaudhary was taking the lead in the Sanjay Nagar area to control the mob when he was shot in the leg by a country-made gun. He was rushed to hospital while other police personnel sustained injuries in the stone-pelting,” said deputy inspector general of police Tilak Singh.

He said two dozen families were shifted to safer places.

“A local resident, Shivam Shukla,16, was injured seriously and referred to Indore. As many as 15 houses,17 vehicles and five shops were burned down in four areas, including Sanjay Nagar, Anand Nagar, Khaskhaswadi and Talab,” said Rakesh Gupta, inspector general of police, Indore division.

But some local residents said the violence began as objectionable songs were played near the mosque.

A local resident Dhannalal Panwar said, “The procession was present near Talab Chowk. A few people came and raised objections against the procession. Later, a large number of people came and started abusing us. They threatened us with dire consequences and also create destruction at our houses.”

Bajrang Dal leader Sunil Verma rejected the charge. “No objectionable songs were being played in the procession. It was a planned attack. The locals made prior arrangements for stones at their houses because it is not possible to collect stones in such huge numbers,” he said.

Police refused to confirm either version. “The people are making different accusations. The matter is being investigated by police to find out what led to violence,” Rakesh Gupta said.

The Congress demanded a probe into the incident. “BJP leaders should refrain from doing politics in a sensitive time. Instead of taking responsibility for the failure of intelligence and district administration in maintaining law and order, the home minister blaming the opposition is a very unfortunate act,” said Congress MLA PC Sharma.

Social democratic party of India (SDPI) state general secretary Dr Mumtaz Qureshi objected to the demolition of houses. “The violence erupted after a few people raised objectionable slogans and played objectionable songs to target the Muslim community. The stone-pelting was done from both sides but police took action only against people of the Muslim community only. Now, they are demolishing their houses illegally,” Qureshi said. SDPI is the political wing of the Popular Front of India (PFI).

Former Supreme Court Bar association secretary and senior lawyer Ashok Arora condemned the demolition. “MP government is violating the right of an accused by demolishing houses. It is unethical and undemocratic to punish the accused,” he said.