In Manipur, the BJP makes history

In five years, in a sign of how the BJP has expanded its strength in the state, and yet another symbol of how it is a truly national party that has gone far beyond its traditional stronghold areas in the north and west India, the party has emerged victorious in Manipur.

The politics of peace and reconciliation, the politics of power and resources, and the politics of targeted state schemes has helped the Bharatiya Janata Party (BJP), for the first time in its history, emerge as the biggest party in Manipur, with a majority on its own

In 2017, the BJP was second to the Congress in terms of seat tally, but was quick to forge alliances and form a government, making N Biren Singh, a former Congressman, the state’s chief minister. In five years, in a sign of how the BJP has expanded its strength in the state, and yet another symbol of how it is a truly national party that has gone far beyond its traditional stronghold areas in the north and west India, the party has emerged victorious in Manipur. 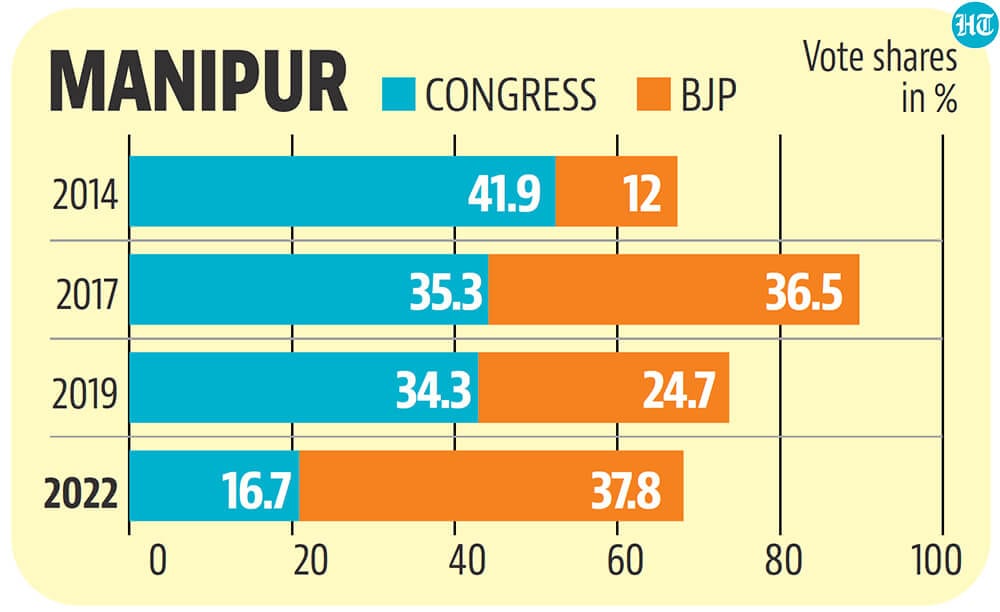 Three factors have helped the BJP.

The first is, undoubtedly, the politics of power and resources. “Double-engine”, a term used by the BJP to depict the advantages of having the same party in power at the Centre and in the state, is a greater advantage in smaller states of the Northeast than elsewhere, for it aligns the political-security objectives of the national and state capital and allows for greater resource outlays, both directly in terms of governance and indirectly in terms of political patronage. It is an open secret in Manipur (and Nagaland) that elections are an expensive affair, more expensive on a per capita basis than other parts of the country. It also helps to have intelligence agencies feed information, especially in areas that have long seen insurgencies and disaffection. The BJP had an advantage in this regard. But attributing the win solely to the party being in power at the Centre, as the Opposition is tempted to do, will be a misreading of the mandate.

And that is where the second factor comes in. In a state known for what was seen as an almost irretrievable hill-Valley divide (the valley is home to Meiteis and has 40 seats; the hills are home to tribal groups, particularly Nagas and Kuki-Zomis, and have 20 seats), the BJP has attempted to bridge the differences. This has taken two forms. The first is sustained political outreach to the hills, co-option of ethnic groups, greater financial incentives and an effort to use a political vocabulary that does not deepen the gulf further. The second is keeping the core of the Valley’s Meitei vote intact by insisting on the unity of the state (especially in the context of Naga peace talks and drawing a red line at the merger of Naga-speaking areas into a greater Nagaland, which is unacceptable to Meiteis), emphasising the Hindu religious identity of the Valley inhabitants, and catering to the long-standing demand of introduction of the inner line permit in the state. The fact that the state has seen relative peace, and the absence of bandhs and blockades in recent years, has reinforced the BJP’s claims of providing order.

And finally, as in the rest of the country, the BJP’s focused delivery of public goods has helped boost its development credentials. At a rally in Manipur, Prime Minister Narendra Modi emphasised the governance record – an expansion of piped water connections to 300,000 homes, 7000 houses built under the PM Awas Yojana, distribution of gas cylinders to 150,000 homes, expansion of rail network, enhanced focus on infrastructure. The vocabulary of vikas (development) helped the BJP.

It is this combination of factors – coupled with a fragmented opposition – that appears to have helped what was once a Hindi heartland party sustain its rise and expansion in the Northeast.