How do India’s fuel taxes impact the less affluent?

The increase in both central and state taxes, the former more than the latter, is an important reason for the sharp hike in petrol and diesel prices. It is often believed that taxes on fuel affect the rich more than the poor, as the latter do not own vehicles. This view is supported by evidence from India’s latest (2011-12) Consumption Expenditure Survey (CES) findings and the 2015-16 National Family and Health Survey (NFHS). However, a 2014 survey for the petroleum ministry, conducted by Nielsen, questions these conclusions and suggests that the increased tax burden on petroleum products might burden the non-rich more than the rich.

1. NFHS and CES suggest that the poor do not suffer when petrol-diesel prices increase

According to the 2015-16 National Family and Health Survey (NFHS), only 6% of households in India owned a car or truck while the share of households owning a motorized two-wheeler is significantly higher, at 38%. The 2011-12 Consumption Expenditure Survey (the latest available) shows that a vast majority of Indian households either do not spend or spend very little on petrol and diesel.

This data suggests that the poor do not suffer when fuel prices are raised. 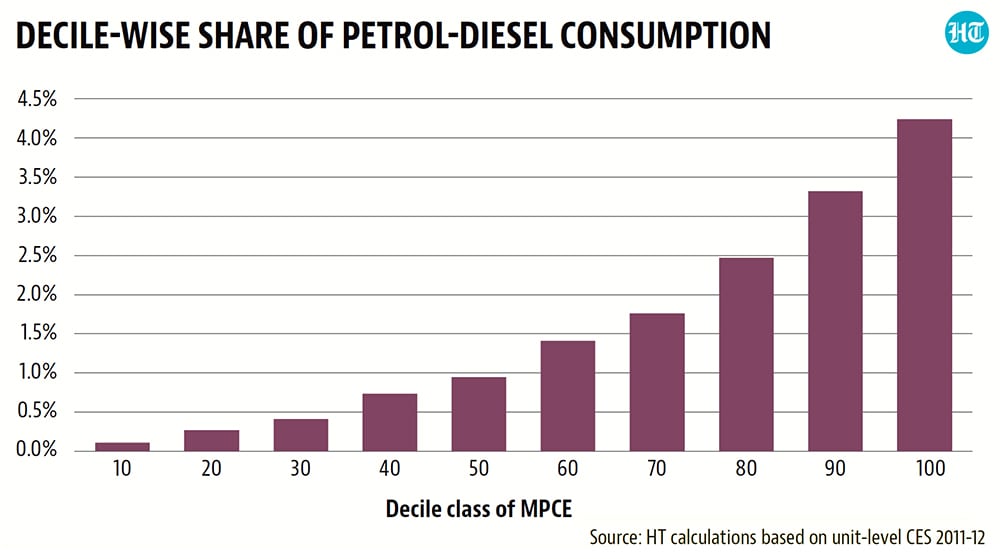 2. Consumption shares might not tell us about an indirect tax’s burden

Using average consumption shares to calculate the burden of an indirect tax has a problem. This is because it does not tell us about the class-wise burden on a particular tax. A simple example can make this clear. Let us assume that an economy has 10 people, where the richest person owns a car, and the five below him own a two-wheeler. Let us assume that the incomes of the five are 70%, 40%, 35%, 30% and 25% of the richest person’s income. This means that the two-wheeler owners earn twice as much as the car owner. Let us assume again that each of the two-wheeler owners consume half the amount of petrol, with the car owner consuming, say 100 liters in a month. If taxes increase by a rupee, and consumption is unchanged, then the richest person would have paid .100 in taxes. The five two-wheeler owners would have paid .250 in taxes. This means that the tax burden is regressive. While the two-wheeler owners earn only twice as much as the car-owner, they have paid 2.5 times more in taxes. The question is, is this the case with the tax-burden on petrol-diesel in India?

A 2014 PETROLEUM MINISTRY SURVEY SUGGESTS THIS MIGHT BE THE CASE

In January 2014, Nielsen conducted a survey for the ministry of petroleum, which tried to estimate the end-users of petrol-diesel in the country. While the survey is slightly dated, it is the only one that we have. The study was based on retail sales in 16 states viz Andhra Pradesh, Assam, Bihar, Delhi, Gujarat, Haryana, Karnataka, Kerala, Madhya Pradesh, Maharashtra, Orissa, Punjab, Rajasthan, Tamil Nadu, Uttar Pradesh and West Bengal. According to data from the petroleum ministry these states account for 88% of total petroleum sales in 2019-20. 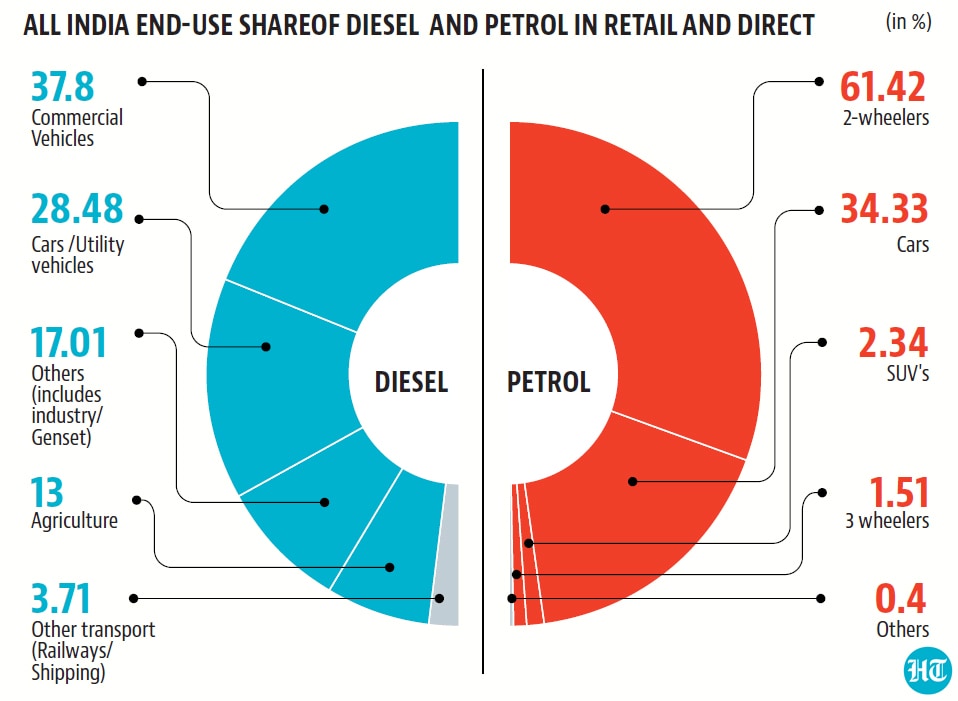 3. Who is paying the most in taxes on petrol and diesel?

Let us say that the government gained 100 rupees each from taxes on petrol and diesel respectively. The end usage data indicates that 60% (i.e. ₹60) of this total tax collected on petrol was paid by the two-wheeler owners while only ₹37 was paid by the car owners.

In case of diesel the data suggests that for every 100 rupees gained by taxes, ₹13 is paid by the agricultural sector while commercial vehicles (including busses and trucks) have paid ₹38 of total increased taxes.

This is bound to get passed on to the non-rich who use these for public transport or via increased transportation cost of goods. Private car owners would have paid ₹28.5 in taxes. 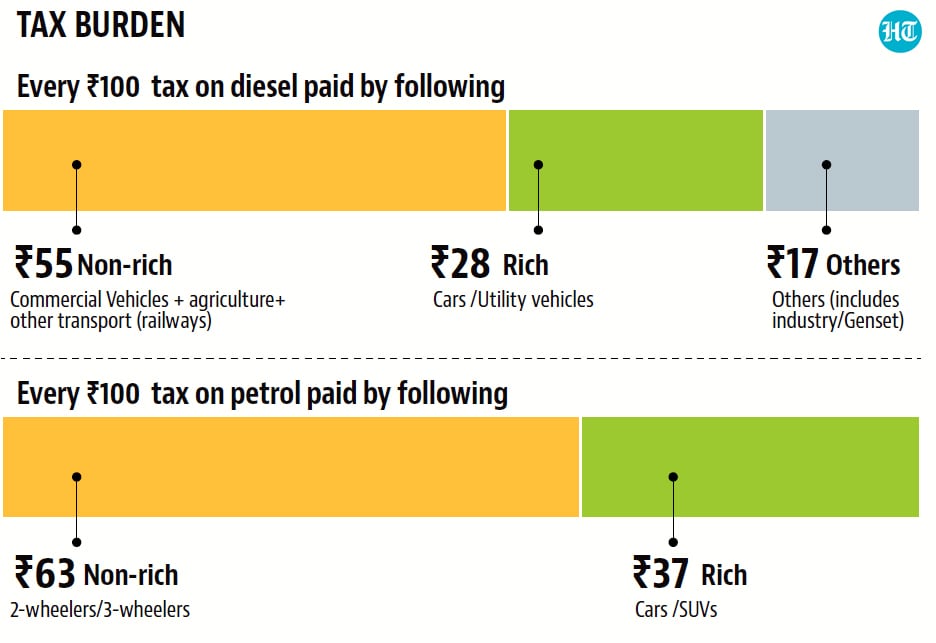