Ghulam Nabi Azad quits Congress: A look back at some recent big exits

Several high-profile leaders have quit Congress this year making it difficult for the party to find its feet in the upcoming state assembly elections.

Veteran Congress leader Ghulam Nabi Azad on Friday joined the increasing list of high-profile politicians who recently quit the grand old party. Azad's exit is being seen as a huge blow to Congress ahead of assembly elections in Gujarat and Himachal Pradesh and the party's ‘Bharat Jodo Yatra’ which is scheduled to kick off on September 7. While Azad used unusually harsh words against the Congress leadership, especially Rahul Gandhi, several leaders in the past have flagged their concerns about the manner in which the party has been functioning in recent years. (Also Read | Who is in Rahul Gandhi’s ‘coterie that runs Congress’: Azad’s resignation letter)

At a time when the Congress is gearing up for its 'Bharat Jodo yatra', the party is struggling to keep its own leaders tact. Hours after Azad's exit, eight former Congress legislators and ex-ministers from Jammu and Kashmir resigned from the basic membership of the party. Earlier this week, Congress spokesperson Jaiveer Shergill quit the party alleging that sycophancy is eating into the organisation like "termites". (Also Read | Laughable when ‘chaprasis’ give ‘gyan’ about Congress: Manish Tewari)

A look back at some of the recent big exits from Congress:

In May, former Union minister Kapil Sibal resigned from Congress and was elected to Rajya Sabha as an independent candidate with support from Samajwadi Party. Sibal was a prominent face of the dissenting G-23 group that first wrote to interim part chief Sonia Gandhi demanding immediate organisational rejig.

"I had tendered my resignation from the Congress party on May 16. It is important to be an independent voice. While staying in Opposition we want to create an alliance so that we can oppose the Modi government. We want that the people know about the flaws of the Modi government. I will put my efforts for that," Sibal had said after resignation.

While Sibal started the next innings of his political career as an independent, former Punjab Congress chief Sunil Jakhar did an ideological somersault and joined the Bharatiya Janata Party days after quitting his old party. Congress had earlier removed him from all positions for alleged anti-party activities. Jakhar said he left Congress over issues like ‘nationalism’, ‘brotherhood’ and ‘unity’ in Punjab.

"Three generations of my family served the Congress party over the last 50 years. Today, I have broken the 50-year-old tie with Congress over issues of nationalism, unity and brotherhood in Punjab," said Sunil Jakhar after joining BJP.

In February, former Union law minister Ashwani Kumar resigned from Congress after a long association of 46 years with the party. He was elected from the Rajya Sabha and was considered close to former Prime Minister Dr Manmohan Singh. Kumar, in an interview with ANI, lamented the lack of a “transformative and inspiring leadership” in the party.

In a letter to Sonia Gandhi, Kumar said, "Having given my thoughtful consideration to the matter, I have concluded that in the present circumstances and consistent with my dignity, I can best sub-serve larger national causes outside the party-fold."

RPN Singh dealt a major blow to Congress's ambitious plan to take on the BJP alone in the Uttar Pradesh Assembly elections. The former Union minister of state (home) shied away from criticising Congress as he jumped ship to join BJP. In his resignation letter to Sonia Gandhi, Singh thanked the party chief for giving him an opportunity to serve the nation, people and the party.

"Today, at a time, we are celebrating the formation of our great Republic, I begin a new chapter in my political journey. Jai Hind," he tweeted, sharing the resignation letter.

Hardik Patel quit Congress in May after he felt that he was being "ignored" in the grand old party. The Patidar leader was elevated as one of the Gujarat Congress working presidents a year after he joined the party. Once a harsh critic of Prime Minister Narendra Modi, Patel joined BJP two weeks later, saying saying, "When people are connecting with the ongoing development works in the country under the leadership of PM Modi, then I should also do the same. PM Modi is the pride of the entire world."

"When Rahul comes to Gujarat, he did not talk about the problem faced by the people of Gujarat. Party leaders are busy arranging chicken sandwiches and Diet Coke for Rahul Gandhi. There are talks in the party that people will vote for Congress when they get bored with the other party. I have spoken to Rahul Gandhi and Priyanka Gandhi and mentioned the problems of Gujarat. He asked me what the problems were and I told him. That's when I was ignored. I decided to leave the party not with sadness but with courage," said Hardik Patel in a press briefing.

Jaiveer Shergill's tendered his resignation claiming that the vision of the decision-makers no longer was in sync with the aspirations of the youth. Lawyer by profession, Shergill said that self-serving interests were gaining precedence while public and national interests were being ignored.

In a letter to Sonia Gandhi, he said "it pains me to say that decision-making is no longer for the interest of the public and the country. Rather it is influenced by the self-serving interests of individuals indulging in sycophancy and consistently ignoring on-ground reality. This is something I cannot morally accept or continue to work with." 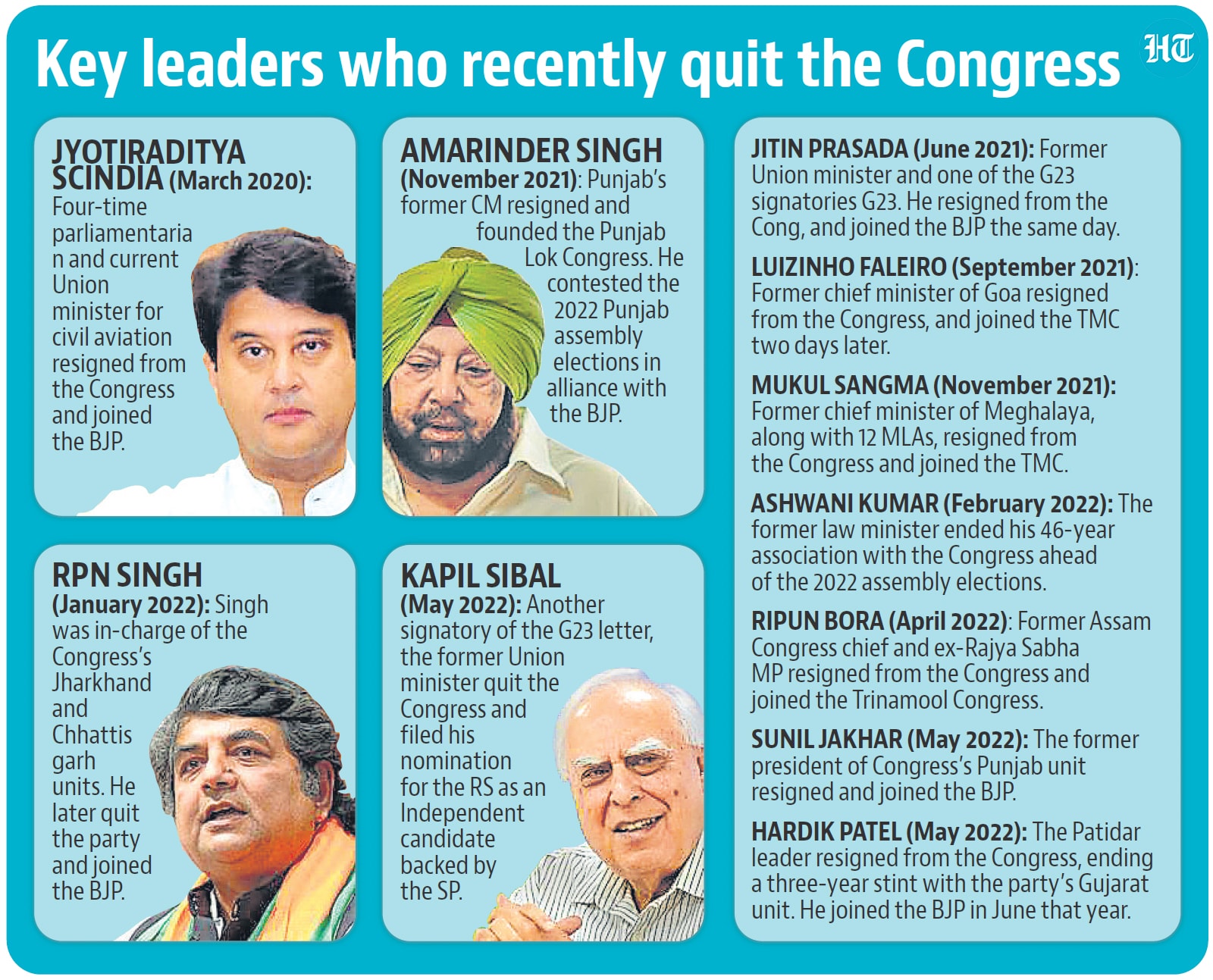 Jyotiraditya Scindia, Captain Amarinder Singh, Jitin Prasada, Mukul Sangma, Ripun Bora, and Luizinho Faleiro form the long list of former Congress leaders who bid adieu to the grand old party. While Amarinder Singh floated his own party, Scindia and Prasada switched to the BJP. Scindia is currently a member of Rajya Sabha and Union minister of civil aviation in the NDA government.