Home / India News / In the legal battle against section 377, the right to love and live is at stake

In the legal battle against section 377, the right to love and live is at stake

Section 377 has been challenged anew by a bevy of LGBT persons across ages, caste, incomes and religion. What does this imply for the community?

July 8, 2001 is burnt into Arif Jafar’s mind. The Lucknow-based social worker and his colleagues at the non-governmental organisation Bharosa Trust were booked under Section 377 of the Indian Penal Code— an 1860 law that criminalises “unnatural sex”—for distributing condoms as part of their outreach to prevent the spread of HIV/AIDS. They were thrashed in public and hauled into the police station.

Jafar, who identifies as gay, had set up Bharosa Trust in 1997 to provide peer support and counselling to transgender persons and men who have sex with men. Driven underground because of extreme stigma that surrounded homosexuality and effectively cut their access to quality healthcare, such vulnerable groups benefited greatly from Jafar’s organisation.

Jafar remained in prison for 47 days: He was beaten by fellow inmates and the police, who forced him to use brackish drain water to clean food bowls. The case drags on 17 years later. “I feel the brunt even now, going (repeatedly) to the court and the police station,” he said.

Life appears to have come full circle for the 47-year-old. On April 27, he filed a writ petition in the Supreme Court against Section 377.

“The petitioner’s sole motivation in approaching this hon’ble court is his wish that no other person should suffer what he had to suffer on account of a discriminatory law i.e. Section 377, IPC and that fellow LGBT citizens can live with the freedom, dignity and respect that they are entitled to,” his petition read.

A writ petition is an instrument by which individuals can move court to demand justice when their fundamental rights have been violated.

Jafar is one among 34 individual petitioners from the Lesbian, Gay, Bisexual, Transgender, Queer (LGBTQ+) communities who have filed writ petitions in the apex court challenging Section 377 in the past two years itself. 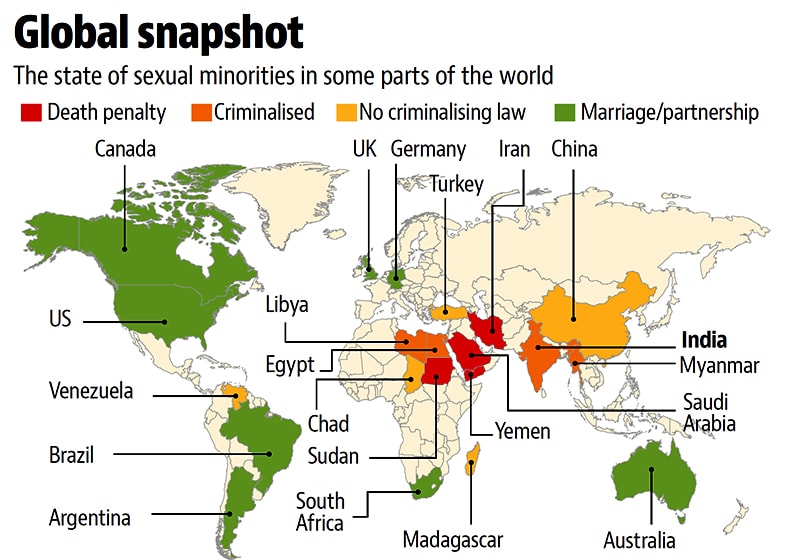 When the legal battle against the section took off in the early 2000s, the main petitioner was Naz Foundation, an NGO that worked in the field of HIV/AIDS prevention. Though nine LGBT persons filed affidavits through Voices Against 377, a coalition of rights groups that joined the Naz Foundation petition, none filed writ petitions.

In April, five gay men came forward as petitioners, including activist Ashok Row Kavi and executive director of the Lalit hotels, Keshav Suri. In 2016, five members of the LGBT community, including chef Ritu Dalmia and Sahitya Akademi Awardee Navtej Johar, filed a petition. The same year, three transgender women from Bengaluru, including activist Akkai Padmashali, also filed a writ petition. On May 14, 20 IITians— current and past students of various branches of the Indian Institute of Technology who identify as LGBT— approached the top court. More petitions from gender and sexuality rights activists are expected.

Anand Grover, the lawyer who represented Naz Foundation, and now represents Jafar and Kavi said, “It is important to bring to the notice of the court not only the varied arguments that lawyers will posit, but more importantly, for the community to put forward their diverse and rich experiences.”

In January, a constitution bench headed by the Chief Justice of India Dipak Misra was set up to hear eight crucial cases — Johar’s petition is one of them. All petitions filed till last month and the IITians’ petition have been tagged to it. The petitioners hail from different age, class, caste, religious and regional backgrounds. For a group that has been denied full citizenship on account of sexual orientation and gender identity, and faces discrimination, extortion, corrective rape and forced marriages, filing writ petitions is an unprecedented move.

These petitions signal a confidence in the community, which can be attributed to a few important factors. One, the three decades-long activism, marked by protests such as those launched by AIDS Bhedbhav Virodhi Andolan in 1992 against police harassment of gay men; demonstrations by same-sex loving women in 1998 when Fire, a film that depicted a lesbian relationship, was stopped from being screened by political workers; and community networks which emerged in the past three decades to address healthcare needs, offer support, and create academic and cultural bodies of work.

Two, the legal battle against Section 377, which effectively began when the Naz Foundation filed a petition in the Delhi High Court in 2001, on account that Section 377 hindered their outreach work among vulnerable groups like men who have sex with men; in 2009, the court read down Section 377 to not apply to consenting adults, which empowered many to come out.

Three, a December 2013 Supreme Court verdict that overturned the Delhi High Court ruling, reinstating Section 377; mass ‘No Going Back’ protests were held in over 30 cities worldwide within days of this judgment, and political leaders from the Congress, the Communist Party of India (Marxist) and Trinamool Congress came out in support of the LGBT community.

Four, many countries have stepped up to ensure that gender and sexuality minorities are not treated as secondary citizens— same sex marriage is now legal in countries such as the United States, the United Kingdom and Germany, and closer home in Nepal, prohibition of discrimination on the basis of sexual orientation has been written into the constitution.

World over, queer advocacy has made great strides in ensuring that LGBT folks are treated with warmth and dignity.

“The greater openness of (Indian) society owes much to the Naz Foundation decision (of the Delhi High Court) which really gave a new language in which one could speak of LGBT persons: a language of dignity and rights,” said Arvind Narrain, who was one of the lawyers involved in the case.

A new generation is now on the streets. Last year, more than 20 cities hosted their own prides, including smaller towns such as Islampur in West Bengal. Collectives by queer students have sprouted in major universities. Queer literature across Indian languages and films with queer protagonists, such as Hansal Mehta’s Aligarh or Shonali Bose’s Margarita with a straw, are received far more warmly than Fire was in 1998.

Within the community, there is also a growing demand to look beyond Section 377 and address everyday issues of caste, ability, income and religion that affect LGBT persons. “Concentrating just on Section 377 eventually makes it looks like the queer individuals would be liberated if Section 377 is amended or scrapped. And this reduces other everyday issues we face in our lives,” argued Moulee, a Chennai-based professional, who only goes by one name. The law doesn’t affect all sections of the community equally. “It is the marginal, without any access to privacy, who struggle simultaneously with poverty and the shame of caste and sexuality, and emerge as the vulnerable. What happens after Section 377?” asked Dhiren Borisa, a teacher at Delhi University.

For Anjali Gopalan, the founder of Naz Foundation, it seems a lifetime has passed since 2001.

“It was very difficult at that time. No one was willing to come forward. But now, something has changed. The 2009 judgment helped. People came out of the closet, and once they were out, nothing could push them back in,” she said.

All the petitioners must prove to the court that Section 377 affects them personally. Urvi, a 21-year-old transwoman from Anantapur, Andhra Pradesh is one of the IITians who filed a petition earlier this week.

Urvi, who uses her chosen name instead of the birth name mentioned in the petition, struggled through school, braving taunts and jibes from classmates and teachers. She would often be made to sit in between rows of boys to change her behaviour. “When I was in Class 6, I realised I was trans. My mother would hit me, slurs would be thrown at me in class. I was very lonely,” she said.

Urvi, who lost her father and was brought up by her mother, holds Section 377 responsible for her plight that often saw her burn the midnight oil in the college library, because she was too afraid to step inside the boys hostel before all the men were asleep. “I would take a bath at 4 am and leave before anyone would wake up.”

“Section 377 doesn’t let people express themselves, and leads to stigma. If Section 377 is abolished, it can help future generations accept themselves,” said Urvi, who has received two prestigious national science fellowships, and was recently accepted in a masters programme in Germany, where she also plans to pursue her other dream—of walking the ramp.

Meanwhile, Padmashali’s petition argues that Section 377 interferes with rights guaranteed by the Supreme Court’s own ruling from 2014, National Legal Services Authority versus Union of India, which accorded a ‘third gender’ status to members of the various transgender identities in India. “How can we live without love, partnership, or a sexual partner? If I want that, I’m a criminal under the section,” asked co-petitioner Uma Umesh.

Kavi’s petition offers statistics on how Section 377 has affected the community. For instance, a 2016 study conducted among 160 LGBT persons based in Mumbai by the Humsafar Trust on the impact of the 2013 judgment (which reinstated the section) showed that 47 per cent felt increasingly scared and anxious. It also speaks to the extortion and sexual and physical violence that gay men and transgender persons face. The Humsafar Trust is a community organization co-founded by Kavi in 1994.

“Criminalisation makes ordinary dignities difficult. We need to close this to see what we can build in the everyday for queer people,” said Gautam Bhan, a professor in urban studies, who was one of nine persons who filed an affidavit in the Naz Foundation petition.

This is not to say that there is no support for Section 377. In fact, it was religious groups like the Apostolic Churches Alliance and the All India Muslim Personal Law Board, organisations such as the Krantikari Manuvadi Morcha Party and Joint Action Council Kannur and individuals such as Delh-ibased astrologer Suresh Kumar Koushal who appealed against the Delhi high court verdict and saw it overturned in 2013. While they remain party to the curative petitions filed by the lawyers challenging this decision, it remains to be seen if they will challenge the new writ petitions. But this time, opposing them will be an army of affected persons.