Hindu Aikya Vedi leader KP Sasikala, who was detained on Friday for defying prohibitory orders, reached Sabarimala temple top. She was allowed to visit the shrine after she assured she would return after ‘darshan’.Earlier in the day, a large number of BJP and RSS workers protested outside the official residence of Kerala chief minister Pinarayi Vijayan against the detention of over 70 persons at Sabarimala Temple late on Sunday night.The members of Bharatiya Janata Party and Rashtriya Swayamsevak Sangh had gathered in front of Cliff House — Vijayan’s official residence at Nanthancode in Thiruvananthapuram.Here are the live updates:

Protests erupted again at Sabarimala after police detained a group of 30 devotees for chanting hymns. Police warned the devotees they would be arrested if they chant hymns as they flout section 144 imposed in the area. 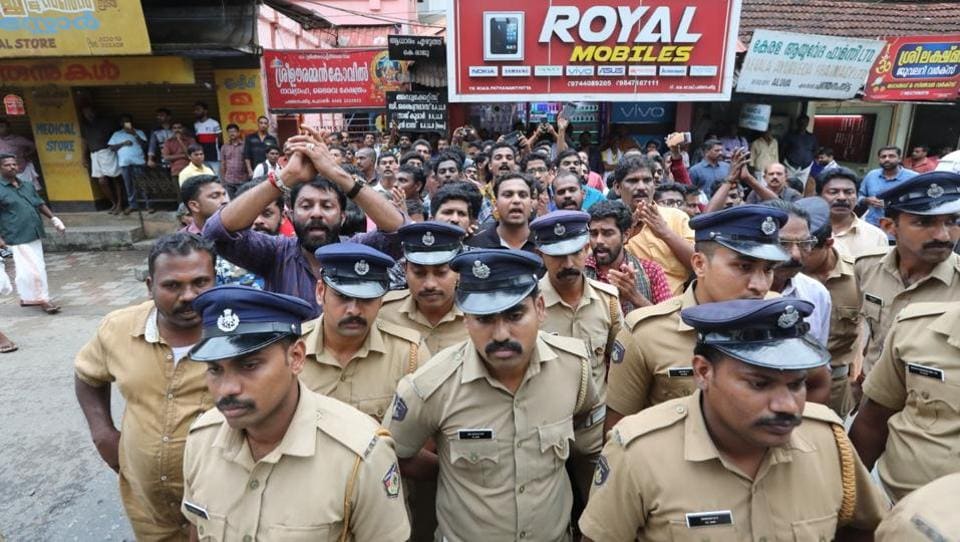 The Travancore Devaswom board has moved the Supreme Court seeking time to implement the verdict of September 28 which allowed women of all ages to worship at the temple.

The Board, which manages the hill shrine, has cited lack of basic amenities among other things as the reason for seeking more time from the top court.

Pilgrims had said there was lack of adequate toilet facilities, causing immense difficulties especially to women, and rest rooms after the floods in August that had destroyed the infrastructure.

The top court had earlier refused to stay its verdict while agreeing to hear in open court a batch of petitions seeking review of its September 28 verdict by which it had lifted the ban on entry of women of menstruating age into the Sabarimala temple.

Congress leader and leader of opposition in Kerala legislative assembly Ramesh Chennithala has demanded CM Pinarayi Vijayan’s resignation, saying, “The state has never been ruled by such an insensitive CM.”

“Minister Alphons should not have visited Sabarimala when there was a law and order situation there,” said CPM state secretary Kodiyeri Balakrishnan, adding “his visit will energise trouble makers”.

KJ Alphons has reached the temple top. “Why do you need 15,000 policemen in Sabarimala? Devotees are not extremists. It is not democracy. Even Stalin will be shamed. The government considers devotees sworn enemies and gave a free hand to control helpless pilgrims,” said Alphons after reaching the hilltop shrine. 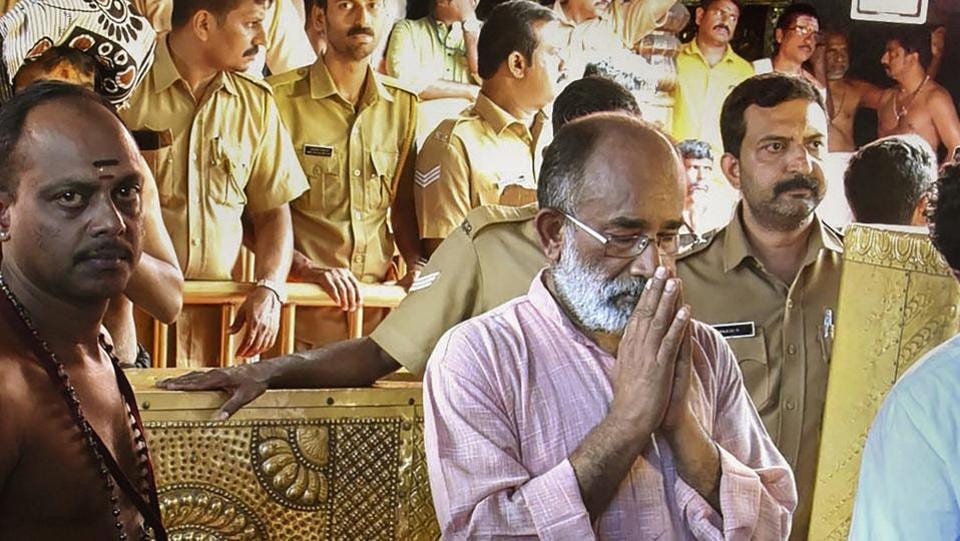 The Kerala high court passed serious strictures against state government while questioning its move to control devotees. The court has asked AG to appear before it and give an explanation of the Sunday midnight drama.

“How can police do such high-handedness in the name of Supreme Court verdict?,” the court asked.

The HC was hearing a plea questioning the last month’s baton charge and subsequent police high-handedness. The HC had earlier asked the DGP to submit a list of erring officials. But police had pleaded helplessness saying it is difficult.

RSS trying to vitiate atmosphere in Sabarimala, said CM Pinarayi Vijiayan, adding Sunday night’s incident was “planned and executed by Sangh outfits and that the government won’t be cowed down by such agitations.”

Earlier in the day, the BJP and RSS had gathered outside the CM’s residence to protest against the mass detention of devotees at temple top.

KP Sasikala has reached Sabarimala temple. Union Minister KJ Alphons is on his way to the temple top. 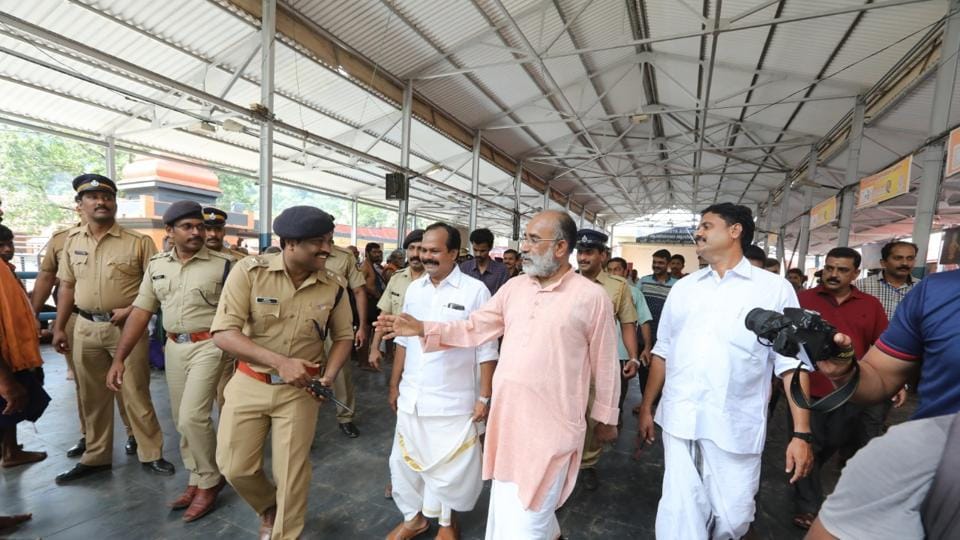 Hindu Aikya Vedi chief Sasikala is nearing the temple top amid state-wide protests against detention of over 70 devotees last night.

Sasikala was allowed to trek to the hilltop shrine after she assured she will return after offering prayers. She was asked to give an undertaking that she won’t camp at the temple top.

“The government handed over temple to the police, said opposition leadr

Sabarimala Karma Samiti, an umbrella organisation of many Hindu outfits, met with governor P Sathasivam seeking his intervention to ensure peaceful pilgrimage to the hilltop shrine. 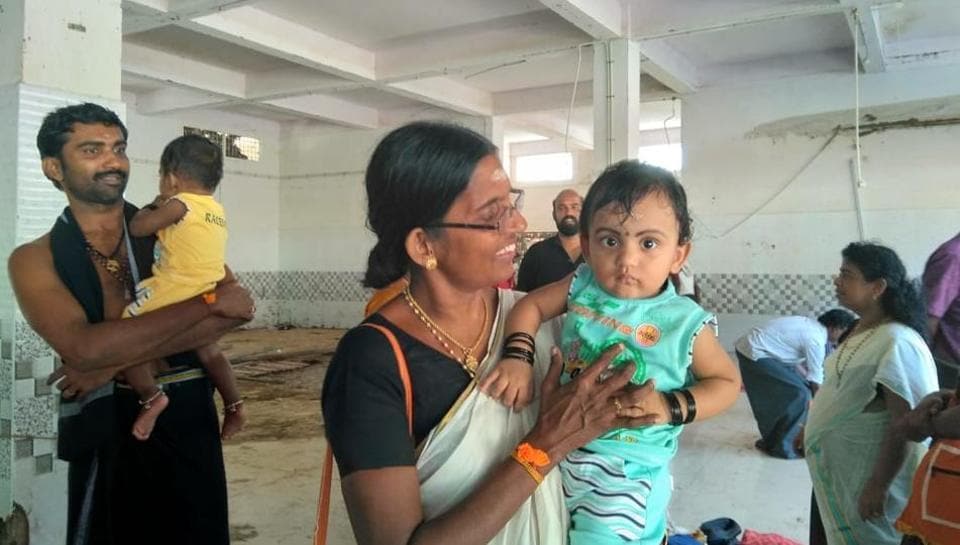 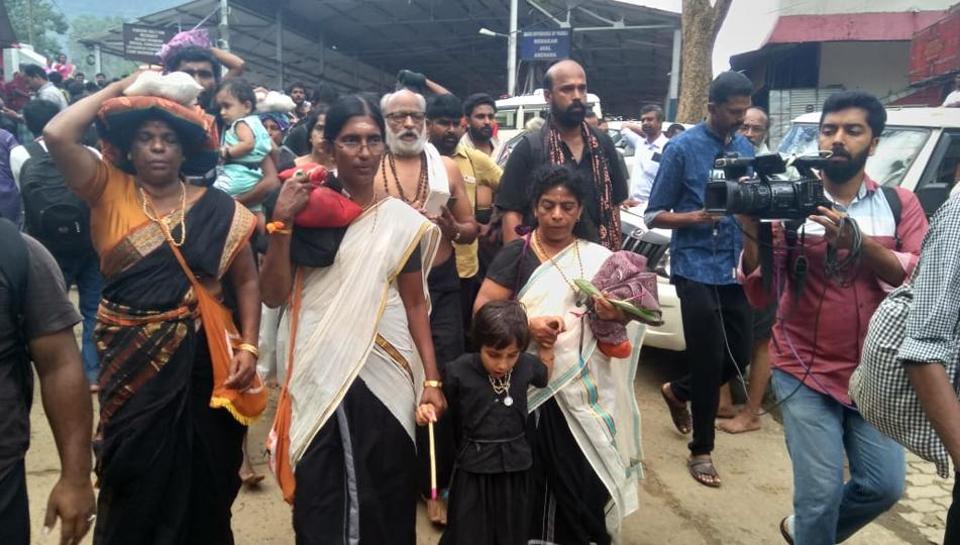 Devotees are not terrorists, why do they need 15000 policemen here? : KJ Alphons

“A situation worse than emergency is happening here, the devotees are not allowed to go up. Section 144 is imposed for no reason. Devotees are not terrorists, why do they need 15000 policemen here?,” said KJ Alphons MoS Tourism.

Police raj in Sabarimala. Pilgrimage is affected due to police high-handedness. Will move NHRC. Police forcing pilgrims to go back. It is a dangerous situation. The whole world is watching the naked rights violation in Sabarimala, said BJP state president S Sreedharan Pillai

Travancore Devaswom board, which runs Sabarimala temple, will move a plea in apex court today seeking time to implement the verdict of September 28 which allowed women of all ages to worship at the temple.

One person injured in hilltop scuffle admitted to hospital. He fell down and got injured during a stampede at the temple top. He has alleged he was manhandled by the police.

Union minister Alphons Joseph Kannanthanam to trek to Sabarimala. Earlier, he was just scheduled to visit the flood-ravaged Pamba base camp but now he will be trekking to the hilltop shrine

KP Sasikala allowed to proceed to Pamba base camp after she gave an assurance that she will return after offering prayers at the hilltop. She was asked to give an undertaking that she won’t camp at the temple top. Superintendent of Police Yatish Chandra said she was allowed only after getting an undertaking.

Youth wing of BJP to hold a daylong state-wide agitation

Yuva Morcha, the youth wing of the BJP will hold a daylong state-wide agitation on Monday to further intensify their stir against “police high handedness”.

“We have organised state-wide protest against this emergency like situation in the state,” Yuvamorcha state president Prakash Babu told news agency PTI.

Hindu Aikya Vedi leader KP Sasikala moves towards temple after she was allowed to have darshan by court. Sasikala was detained on Friday night after she had defied prohibitory orders.