Half of applicants in Delhi fail driving tests in automated format

Experts said that in Delhi, where at least 2,000 people are killed in road accidents every year, automatic driving tests are a “foolproof” way to ensure that unsafe drivers don’t get driving licences.

The introduction of fully automated driving test tracks at three motor licensing centres in Delhi has led to a sharp rise in the rate of applicants failing permanent driving licence (DL) tests, according to government data accessed by Hindustan Times.

At least 48.9% of applicants at the three motor licensing centres, where automated DL tests were introduced in March, have failed. In comparison, only 16.2% of applicants failed the tests before the introduction of automated tracks, according to reports from the Delhi government’s transport department.

Experts said that in Delhi, where at least 2,000 people are killed in road accidents every year, automatic driving tests are a “foolproof” way to ensure that unsafe drivers don’t get driving licences.

“The majority of deaths that happen in road accidents are due to human error. Since the automated system has removed human intervention from the tests, it weeds out poor and unsafe drivers from hitting the roads. The new test is so strict that if a driver scores anything under 70%, they are failed and have to apply again,” said Piyush Tewari, CEO, Save Life Foundation. 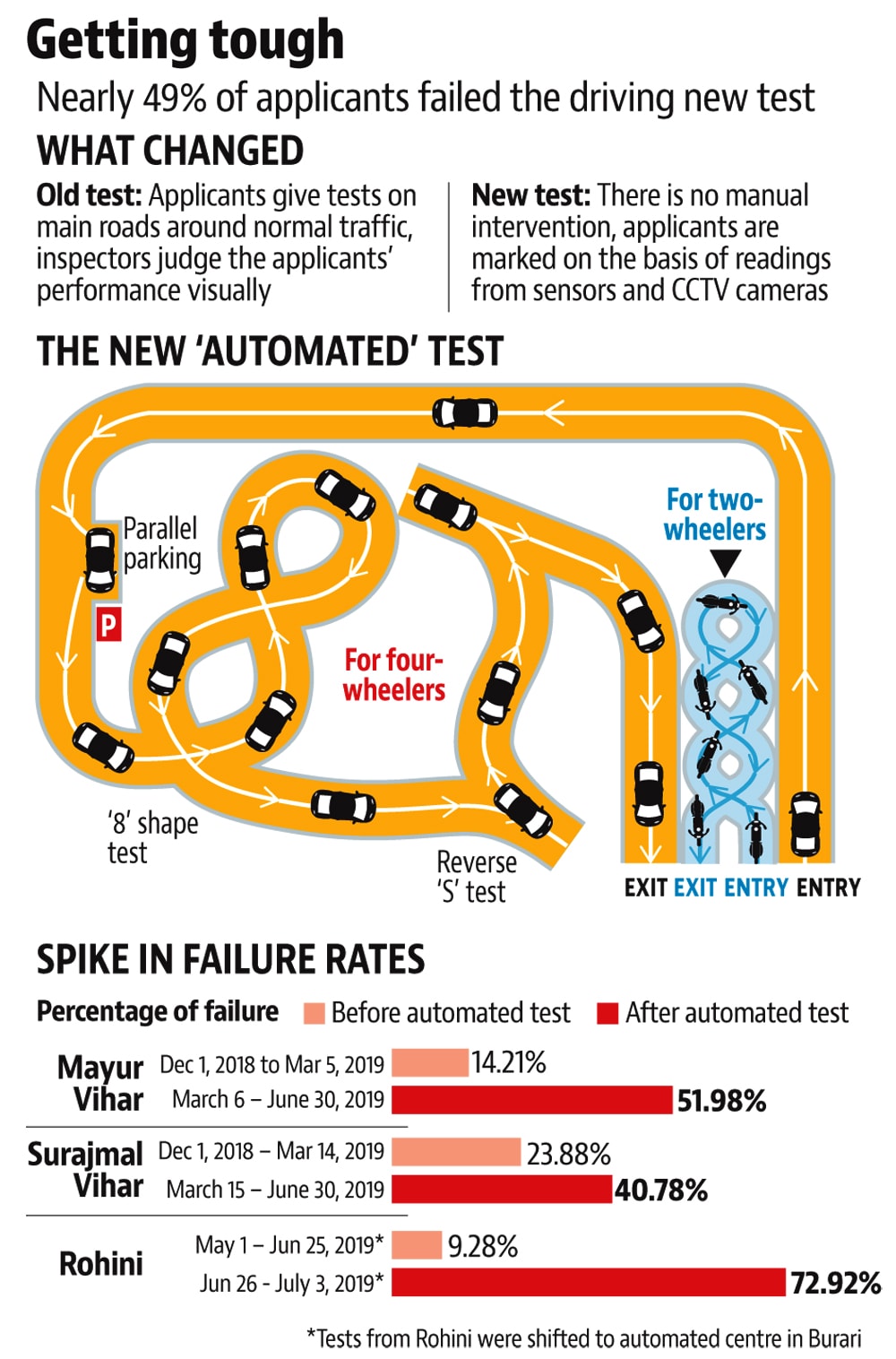 Starting March, three motor licensing centres — Mayur Vihar Phase-I, Surajmal Vihar and Burari — became the first in Delhi to be shifted to a fully automated system that marks applicants on 24 parameters based on readings from sensors and high-resolution cameras along the track to ensure a “scientific” result.

The new automated tracks have 10 different test patterns — seven for four-wheelers and three for two-wheelers. Those who are able to ride on the track without deviating from the marked lines and within a stipulated time clear the test.

Under these new tests, applicants are required to reverse their car on an ‘S-shaped’ bend, drive uphill and go around an ‘8’ loop. Their decision-making skills on overtaking and at traffic junctions are tested on a separate track. Two-wheeler riders need to prove their riding skills on a serpentine track.

A senior transport department official said that the rate of failures was low in the earlier test because it was far too simple. “The manual test only required applicants to drive in a straight line, while the new test is significantly harder as it has complex bends and gradients. As a result, we’ve noticed a sharp drop under the rigorous automated tests,” the official, who did not wish to be identified, said.

In addition to the increase in failure rates in driving tests, the introduction of the automated tests has also led to a sharp decline in the number of people applying for driving licences, the data shows. For instance, at two driving test centres —Mayur Vihar and Surajmal Vihar — a total of 9,343 applicants appeared for the test in the last four months of the manual system, which fell to 6,215 applicants in the first four months of the introduction of automated test. Data for the Burari test centre, which has replaced the old centre at Rohini, was not available for the corresponding days of the manual tests in Rohini.

At the newest track in Burari, which became operational on June 26, nearly 73% of applicants have failed their driving tests till July 3 — last day till which data was available. This means that more motorists failed DL test in eight days (334) compared to final 56 days (288) at the previous test centre in Rohini.

The automated Mayur Vihar Phase-I track, operational since March 6, has seen 52% people failing the test till June 30. At the same centre, between December, 2018 and March 5, 2019 under the manual system, only 14% of applicants were rejected.

In the other seven “manual” licensing offices in Delhi, driving tests are conducted on the main road with usual traffic, where applicants are required to drive straight for less than a kilometre while being supervised by a motor licensing inspector. While the automated centres have no human intervention, the results at manual test centres are reliant on the discretion of the licensing officer. In the new process, the licensing officer is only tasked with overseeing the test and signing the automatically generated result sheet.

Delhi transport minister Kailash Gahlot said the city’s remaining “manual” test centres will also shift to automated tracks in the next three months. “This system was the need of the hour as Delhi will gradually move towards having skilled drivers which will prevent road accidents. Knowing the basic rules of driving and ways of saving fuel, which one learns through these tests, will also help reduce emission levels and smoothen short traffic bottlenecks that erupt because of bad driving practices,” he said.

Experts, meanwhile, said that the automated system provided a much-needed transparency to the DL test system in Delhi.

“There’s a backstage benefit of this system too which is reduction in the ‘tout culture’. In the automated system, everything from filling the online application form, doing the e-transaction to selecting a slot for the test is online. This should be expanded widely in the national Capital and automated driving tests should be made mandatory,” said KK Kapila, chairman, International Road Federation (IRF), a global body working for better and safer roads worldwide.