A BJP MLA, Nandkishore Gurjar, has filed a complaint against producer Anushka Sharma for using his image in Paatal Lok, without taking his permission.
READ FULL STORY
Hindustan Times | By HT Entertainment Desk

A BJP MLA, Nandkishore Gurjar, has filed a complaint against producer Anushka Sharma, for using his picture without his permission in her recent Amazon Prime show, Paatal Lok. The picture, which has been morphed to include the show’s fictional characters, also includes Gurjar.

In addition to the unauthorised use of his likeness, Gurjar has also found problems with the show’s content, and has called it ‘anti-national’. In his complaint, the MLA from Uttar Pradesh’s Loni has said that Paatal Lok shows castes in Sanatan Dharma in a negative light, according to an India Today report.

In the picture, the fictional villain Bajpayee is seen inaugurating a highway, with Gurjar standing in the background. The original picture was tweeted by Uttar Pradesh CM Yogi Adityanath in 2018. 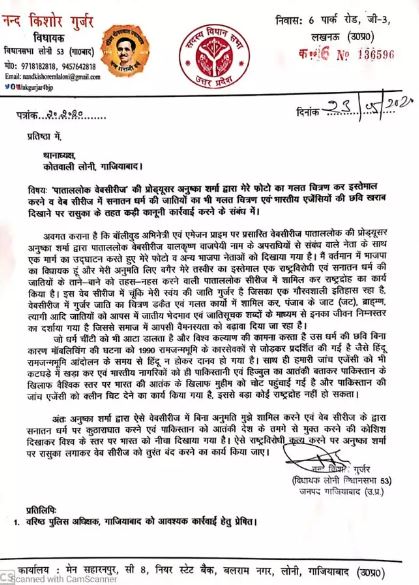 Also read: Anushka Sharma on how she bounced back from Zero, reveals her favourite Paatal Lok scenes

Gurjar reportedly complained that the show maligns the image of the BJP, tries to create a terror-free image of Pakistan, and asked for a case to be registered against Anushka under the National Security Act for instigating communal disharmony.

Previously, several complaints have been filed against the makers of the show for perceived racist portrayal of people from the Northeast, by outfits such as the All Arunachal Pradesh Gorkha Youth Association, the Bharatiya Gorkha Yuva Parisangh and lawyer Viren Sri Gurung.