Priyanka Chopra and Nick Jonas were expected to tie the knot in a Hindu ceremony on Sunday. The couple was reportedly married in accordance with Christian traditions on Saturday at Jodhpur’s Umaid Bhawan palace.There has been only two official announcements by the couple so far - they shared pictures from the mehendi and sangeet ceremonies on Saturday and Sunday respectively. “One of the most special things that our relationship has given us is a merging of families who love and respect each other’s faiths and cultures. And so planning our wedding with an amalgamation of both was so so amazing. An important part for the girl in an Indian wedding is the Mehendi.Once again we made it our own and it was an afternoon that kicked off the celebrations in the way we both dreamed,” Priyanka and Nick wrote in a joint statement.Here are all the updates from Priyanka and Nick’s wedding:

Katrina Kaif commented ‘so funnnn’ on Priyanka’s pictures from the sangeet ceremony. She also commented that the newlyweds looked beautiful when Priyanka posted pictures from mehendi. Katrina replaced Priyanka on Salman Khan’s Bharat when she walked out of the film.

One of Priyanka Chopra’s relatives at her wedding at the Umaid Bhawan Palace in Jodhpur has become a meme for cracking a comical expression in the wedding photos. Read full story here. 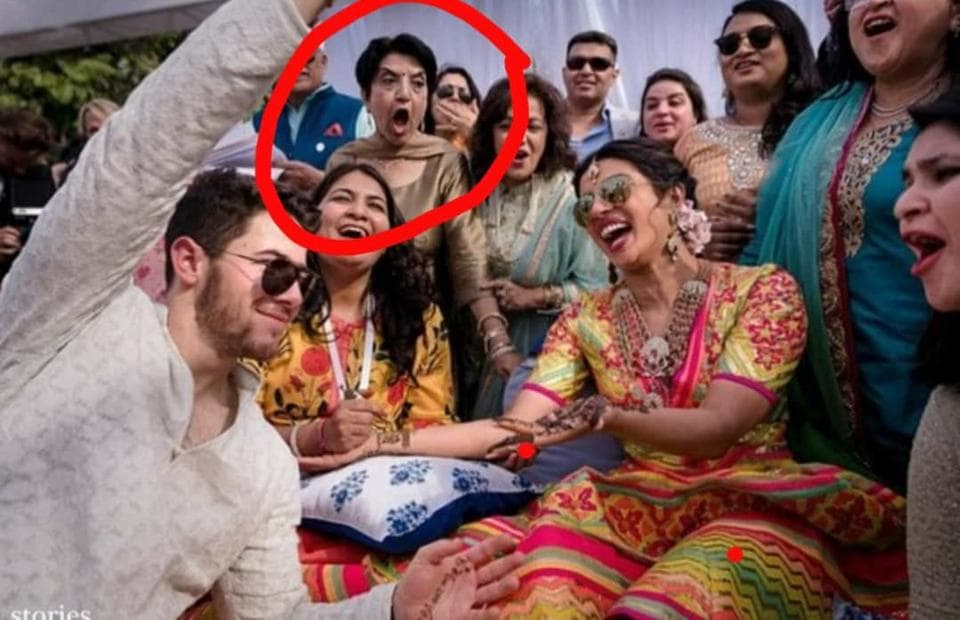 Jonas brothers come together for a pic

All four Jonas brothers posed in traditional Indian outfits for the sangeet. Check out Nick, Kevin, Joe and Franklin in this picture. 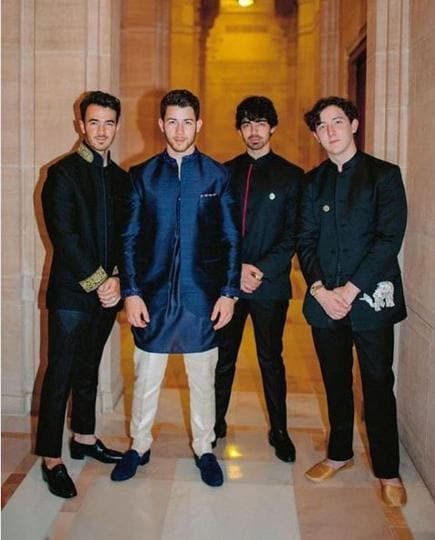 Parineeti performed at the sangeet

Priyanka’s cousin Parineeti Chopra gave a solo dance performance at the sangeet. She is seen hoisted on a a boat with wind blowing in her hair.

Joe Jonas performed at the sangeet

A bit from the video shared by Priyanka Chopra shows Joe Jonas performing at the sangeet. He is the lead singer of DNCE.

The Ambani took front seats at the sangeet

Pictures from the sangeet ceremony show the Ambani family to be sitting in the front seats with the bride, groom, and their families. Isha Ambani also clicked pictures with the whole group. 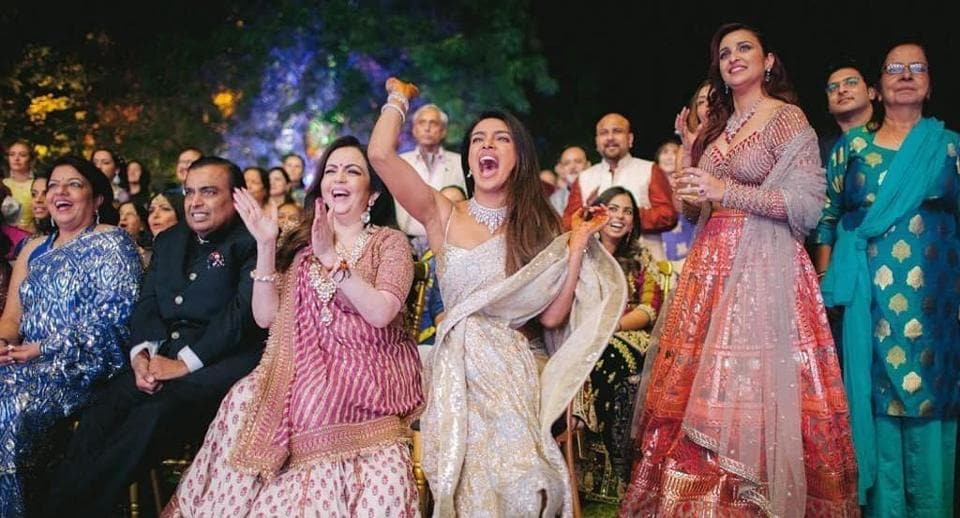 Priyanka Chopra, center gestures as she sits with industrialist Mukesh Ambani, second left and other guests during a ceremony before her wedding with Nick Jonas , at Umaid Bhawan. ( AP )
7:45 pm IST

Priyanka Chopra and Nick Jonas had a dance-off with their families at the sangeet ceremony. Watch video of their performances here:

Priyanka’s mother Madhu Chopra says she proud of the residents of Bareilly for celebrating her daughter’s wedding in her home town. Read full story here.

Priyanka’s to-be sister-in-law wore a red lehenga and is also seen dancing in one of the pictures from the sangeet. 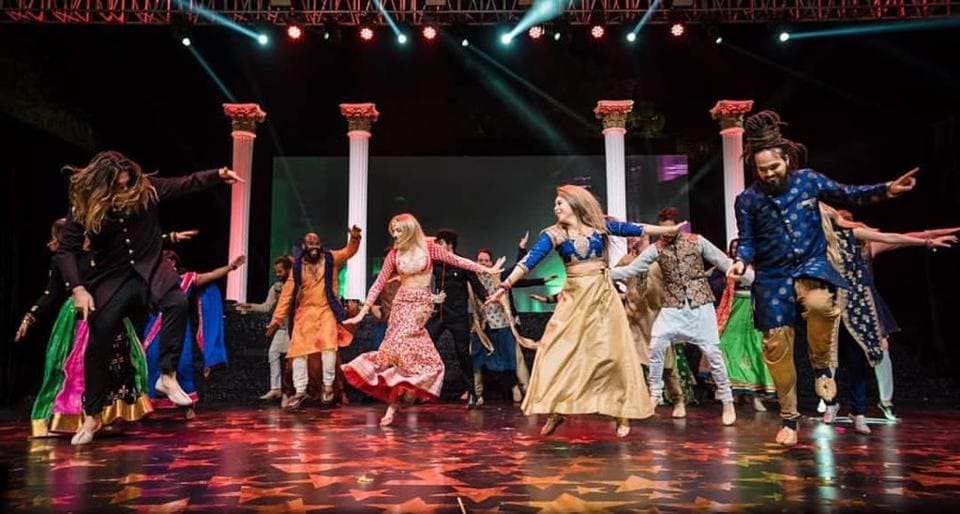 Sophie dancing at the sangeet in a red lehenga.
6:55 pm IST

Priyanka danced with her mother at the sangeet

New pictures from the sangeet ceremony show Priyanka dancing with her mother on stage. Madhu Chopra is seen wearing a blue saree while Priyanka is seen in a silver one. 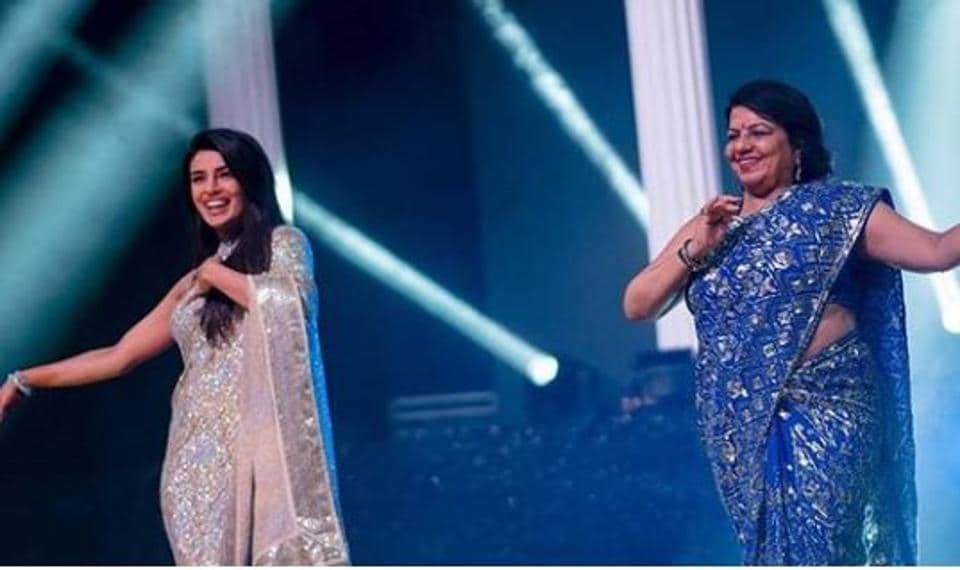 Priyanka Chopra and Nick Jonas’ sangeet ceremony photos are finally out, which see the families and friends of the couple vying to lift the trophy. See the pics here. 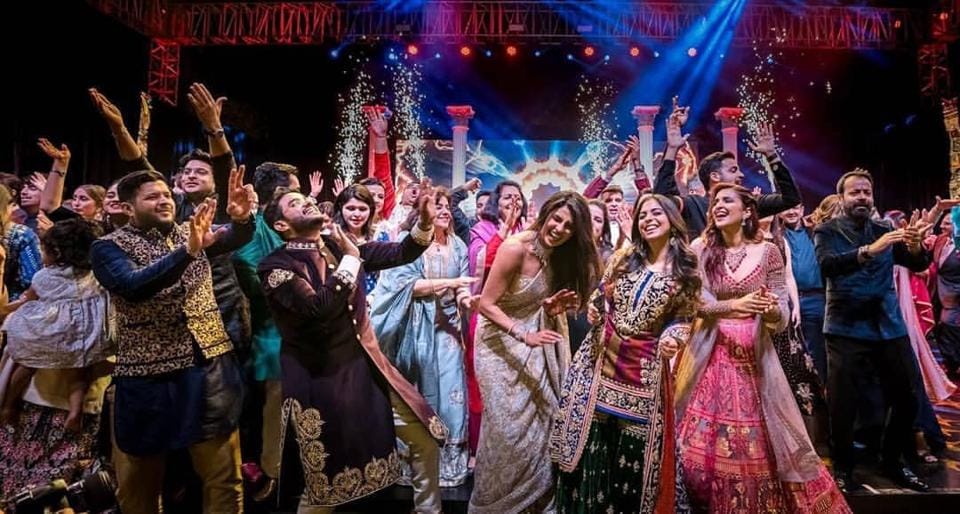 According to a report in News18, Priyanka’s residence in Bareilly has been decorated by her neighbours to celebrate her wedding. They have urged her to visit her childhood home after her wedding.

YouTuber Lilly Singh has shared a video from the venue which shows her enjoying Punjabi music as she puts on makeup. 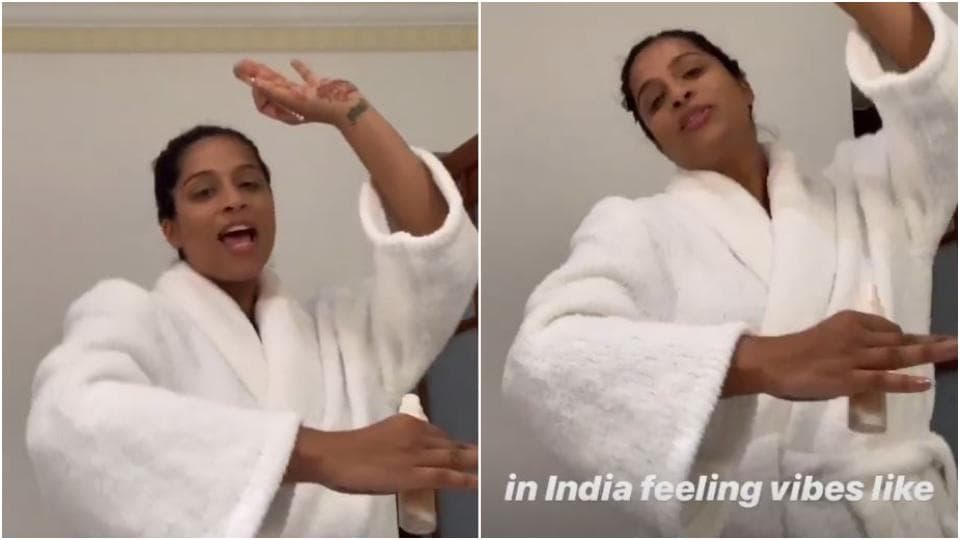 Fans were all love for Sophie Turner’s desi outfit and look at Priyanka Chopra’s wedding in Jodhpur. See their reactions here.

“Twirl it like you mean it! @priyankachopra is a vision in a fabulously folksy, multi-hued organdy ensemble, inspired by a vintage AJSK collection at her Mehndi, teamed with heirloom jewellery designed by Abu Jani Sandeep Khosla by @sabooatajsk,” their post read.

Dairy brand Amul has wished the newlyweds with their famous Amul Topical. 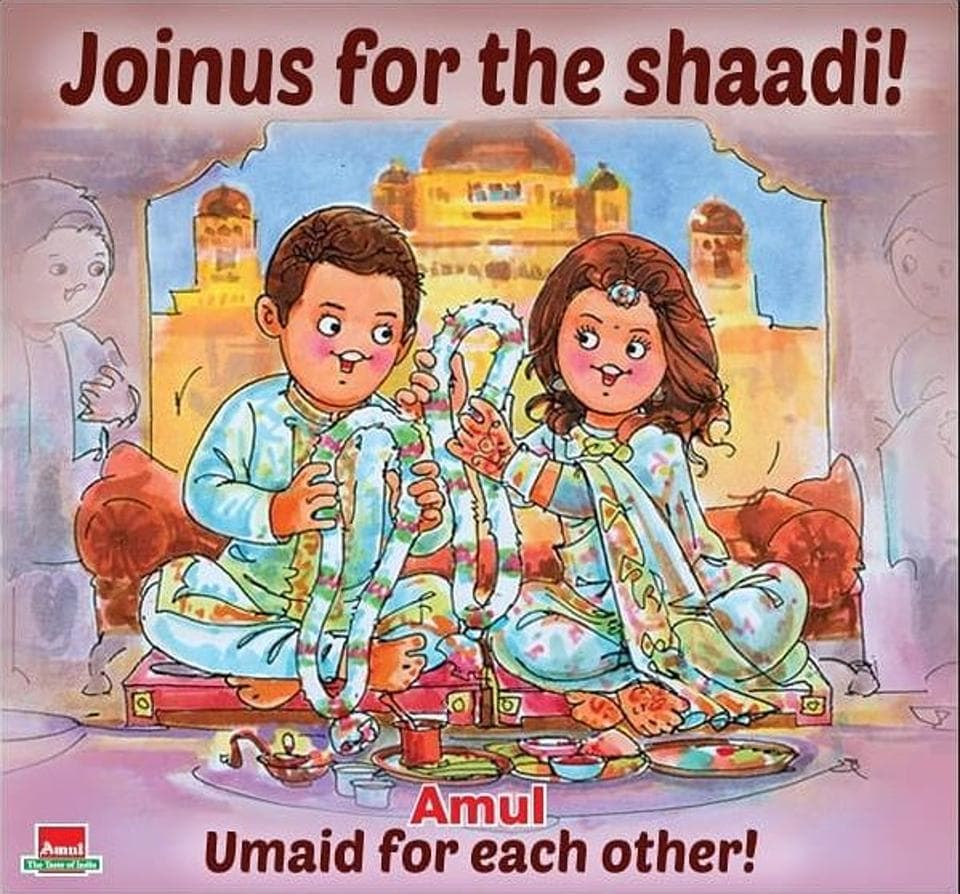 Priyanka shared a video which shows Nick hit the ball during a cricket match as others watch it fly across the garden.

As Nick Jonas and Priyanka Chopra prepare to tie the knot, photos of Joe Jonas and fiancee Sophie Turner emerged on social media. While Sophie looked beautiful in a lehenga, Joe and other guests were seen arund the venue, Umaid Bhawan.

Priyanka shares pic of a cricket match ahead of wedding

Priyanka Chopra and Nick Jonas’ families played cricket together and the actor has shared a video. The match, between Team Priyanka and Team Nick, had both the families participating on the day of mehendi. 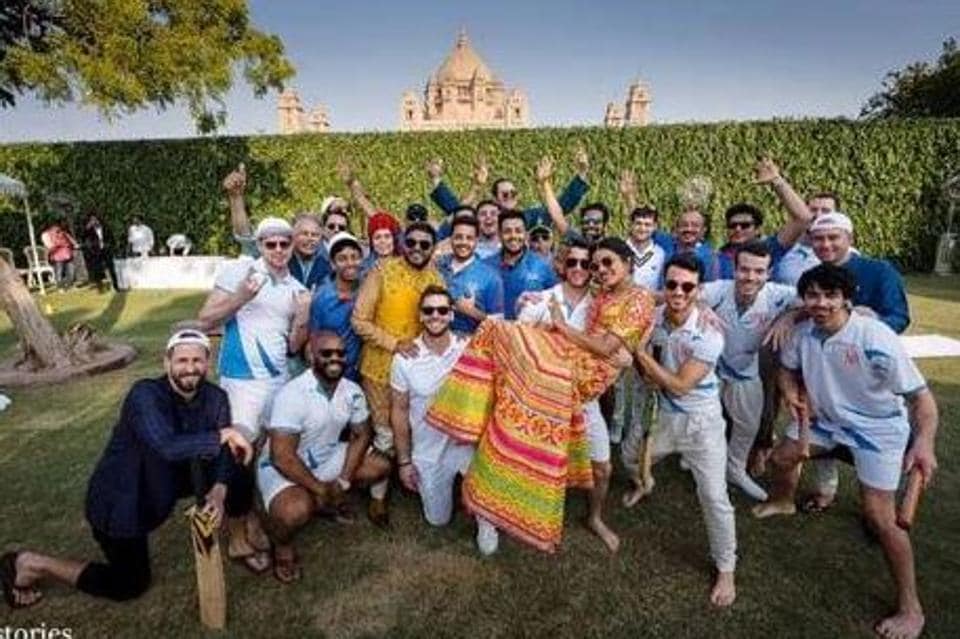 Just like you, Priyanka and Nick also held a pre-wedding photoshoot, but their’s appeared in Vogue, and according to Pinkvilla, could have fetched them $2.5 million. That’s Rs 17.5 crore.

Priyanka was injured before her mehendi ceremony

According to a report in Dainik Bhaskar, Priyanka slipped and cut her leg against the wooden floor of her hotel room at the Umaid Bhawan palace. But that did not stop her from having mehendi applied to her arms and legs shortly afterwards. A doctor was called, painkillers were injected and a bandage was applied.

‘Chooda’ ceremony done, guests waiting for the ‘baaraat’ to arrive

According to a SpotboyE report, the ‘chooda’ ceremony has been completed and the guests are waiting for the ‘baaraat’ to arrive, with Nick on a ‘ghodi’.

Priyanka’s vision for her future with Nick

“My ultimate dream is to have kids,” Chopra has said, according to a Vogue interview. “As many as I can.”

Priyanka’s cousin, Parineeti Chopra, welcomed Nick to the family with a tweet on Sunday. Alongside a previously released image of Priyanka enjoying her mehendi ceremony with her bridesmaids, Parineeti wrote, “The MEHENDI. The job of us bridesmaids was to make sure the bride was happy & comfortable at all times. But we didn’t have to worry about it - coz Nick promised do it all his life. Welcome to the family Nick jiju! I’m so happy that the Jonas & the Chopra family is now United!”

The MEHENDI. The job of us bridesmaids was to make sure the bride was happy & comfortable at all times.
But we didn't have to worry about it - coz Nick promised do it all his life. Welcome to the family Nick jiju! I'm so happy that the Jonas & the Chopra family is now United! 💛 pic.twitter.com/AIbvUjMIRY

Nick knew he wanted to marry Priyanka after their third date

After their third date, Nick remembers calling up his mother and telling her that he was going to marry Priyanka. A few days ago they’d met at an iconic Los Angeles hotel. Nick told Vogue in an interview, “She walks into the Chateau (Marmont), and I feel an overwhelming sense of peace and understanding about this next chapter of my life.”

Nick is said to have performed a medley of his songs at the sangeet ceremony, including versions of Tune Maari Entriyaan and Gallan Goodiyan, according to a DNA report. Priyanka, meanwhile, danced to Desi Girl. Priyanka’s mother, Madhu Chopra, and cousin, Parineeti, also joined in, as did Nick’s family.

What was on the menu?

According to a DNA report, “There was a mix of Indian, Rajasthani and Mughlai dishes,” at the pre-wedding ceremonies.”There was Chinese and continental food, too. For the western wedding and dinner, chefs were flown down from Goa. There were several coastal delicacies on the platter, along with Indian and continental fare. While the dishes kept changing, one thing remained the same — the food was served in silverware,” a source was quoted as saying.

Twitter slams Priyanka for firecracker display at her wedding

Priyanka Chopra and Nick Jonas’ Christian wedding ceremony on December 1 was followed by a grand firecracker display. Twitter users have now called out Priyanka who is a campaigner against firecrackers.

Guests were welcomed with music and a non-disclosure contract

According to DNA, guests were welcomed with a dance performance and champagne - and were also made to sign an NDA. “I’ve just reached the hotel. I can’t say anything. We have all signed an NDA (Non-Disclosure Agreement),” the report quoted make-up artist Mickey Contractor as saying.

This is the first text message Nick sent Priyanka

It was Nick who first texted Priyanka. In a DM he wrote, “I’m hearing from a few mutual friends that we should meet.” According to Vogue, Nick continued, “She responded day of with a message that said, ‘My team can read this. Why don’t you just text me.’ ”

Priyanka Chopra and Nick Jonas’ Hindu wedding ceremony will take place at Umaid Bhawan’s Baradari lawns with Mehrangarh Fort as the backdrop. The mandap will be around 40-feet high with the Mehrangarh Fort and decked up with red flowers.

In a Vogue interview, Nick recalled the story of how he got down on one knee when he first saw Priyanka. It was at the Vanity Fair Oscars party in 2017. He saw her approach in a Michael Kors dress, and he promptly got down on one knee and said, out loud, “You’re real. Where have you been all my life?”

Priyanka will wear Abu Jani-Sandeep Khosla at the Hindu wedding?

According to a DNA report, the bride will wear an Abu Jani-Sandeep Khosla creation at the Hindu wedding ceremony. Both Priyanka and Nick wore Ralph Lauren creations at the Christian wedding on Saturday. AJSK also designed Deepika Padukone’s attire at her recent Mumbai wedding reception, at which her husband Ranveer Singh wore Rohit Bal. Designer Sabyasachi, however, has been spotted in Rajasthan, fuelling speculation that he might be behind Priyanka (or Nick’s) Hindu wedding look.

Nick Jonas will arrive on a ‘ghodi’ accompanied by a ‘baaraat’

According to a Vogue report, the groom will arrive on a ‘ghodi’ - a mare - for the Hindu ceremony, as per rituals. He will be accompanied by a proper ‘baaraat’. The report includes an interview with the couple, in which their conversation about making this decision was recreated. “Are you comfortable on a horse?” Priyanka asked Nick, who replied, “I am... I can’t wait.”