Home / Cricket / From Suryakumar Yadav to SKY, the tale of a transformation

From Suryakumar Yadav to SKY, the tale of a transformation

IPL 2021: How Mumbai Indians batsman Suryakumar Yadav changed his game and his fitness late in his career and became one of T20 cricket's fiercest shot makers.

“I had only one thing on my mind. The harder I work, the more consistent I become. Someday, my opportunity will come.”

Those are cliches, delivered in a matter-of-fact tone that completely belies the hard, gritty truth behind them: Suryakumar Yadav has lived those words. He set out with a dream of playing for India 11 years ago, and last month, at the age of 30, that dream finally came true.

In the middle, he has gone through it all. Yadav was not a prodigy; he was a powerful player with a major weakness--he did not have shots to offer on the off side.

Then there were allegations of dressing room strife, indiscipline, being hauled up by the Mumbai Cricket Association (MCA) once for questioning his exclusion from the state's one-day team (and included only after tendering an apology). The kind of stuff that doesn’t do much good to a man’s career or confidence.

Yadav brushed it aside. He trained. He waited.

“When I got to know that I would be making my debut I actually went 8-10 years down the line,” Yadav said over the phone. “I was thinking about my debut for Mumbai in 2010, coming into the Mumbai Indians setup in 2011 and getting to learn a lot in those three years. Then in 2014, when I went to another franchise, I got an opportunity to experience that format before playing first-class regularly. Then when I came back to Mumbai Indians in 2018, I thought this is the right time for me. I’m experienced enough. It’s high time I take a step forward and be harsh on myself.”

And so he did.

He signed up for an unforgiving diet to become leaner. Eight years after he had already become a top-level professional, he began to transform his game, strengthen his off-side strokes. He trained at ungodly hours for specific results, asked friends to give throwdowns during the lockdown and even stepped up to the intimidating challenge of opening the batting for Mumbai Indians. This, while averaging over 44 in 77 first-class matches for Mumbai.

It yielded spectacular results, reviving a career that was going nowhere special. At KKR, between 2014 and 2017, Yadav aggregated 164, 157, 182 and 105 runs. The next three seasons at Mumbai Indians, Yadav scored 512, 424 and 480. It was impossible to ignore Yadav’s transformation after the 2020 IPL. He finally made his India debut against England last month, blasting a 31-ball 57 in his second T20I, batting at the coveted No 3 position. Next match, he scored 32 off 17. With Virat Kohli revealing his wish to open for India, Yadav knows the No 3 could be his for the T20 World Cup later this year, but he is not willing to overthink. “I’m really flexible,” he said. “My debut game for India, even though I didn’t bat, I was supposed to bat No 6 or 7 with Hardik. In the next game I got to bat at No 3. So I was happy.”

One man who worked with Yadav through his transformation was Mumbai Indians head coach Mahela Jayawardene, who first saw the spark that convinced him to promote Yadav up the order.

"We thought that his skill, technique and game awareness probably suited to opening the batting, which he started with us,” Jayawardene said. “And then bat at No 3 and 4 where he can control the innings, especially in the middle overs. I think he has flourished in that role."

This is where changing some fundamental aspects of his old game became critical.

“Initially he was a player who would use the pace and probably play behind the wicket but over the last 2-3 years he has completely changed that,” said Jayawardene. “He can play in front, covering more areas. He has more ammunition to work with. He has become pretty much a very complete player.”

Effecting basic technical changes almost 8-9 years into first-class cricket isn’t easy. The muscle memory makes it difficult to unlearn before getting wired to the new way. “Surya was willing to change, he was willing to do the work,” said Jayawardene. “Not all players would want to change like that. They would probably back their instincts and say ‘Oh this is the way I have played so far and I just want to continue’. It’s entirely up to the player." 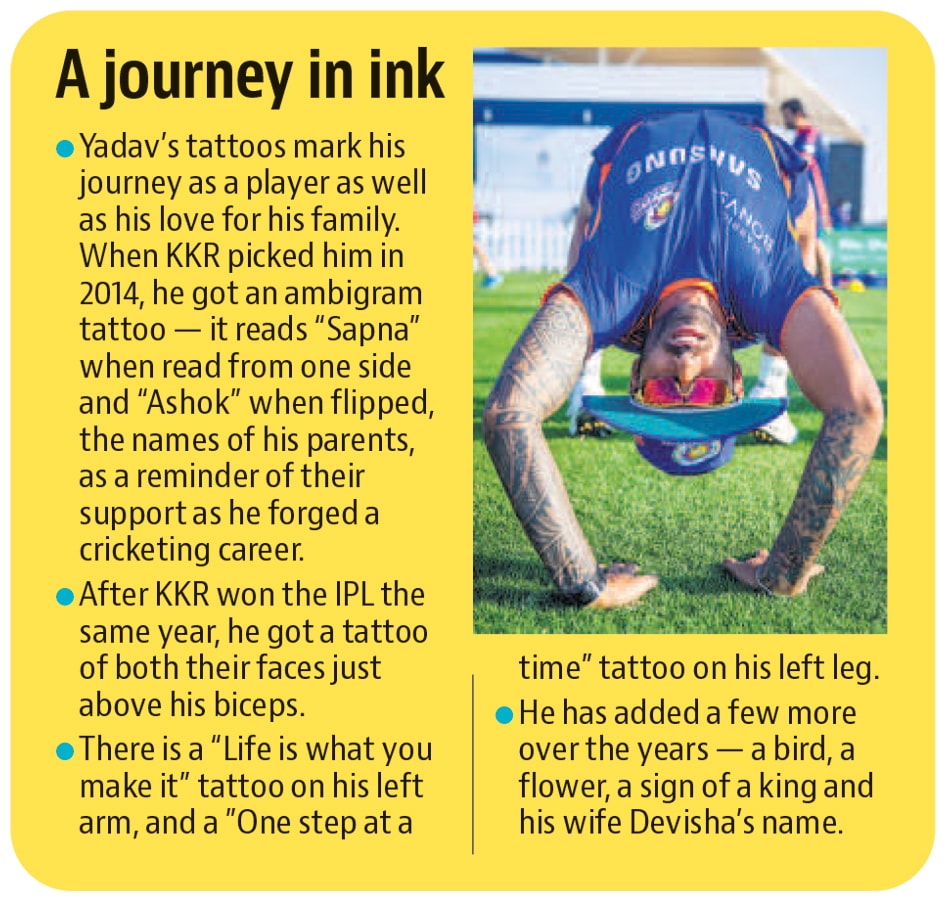 “You can’t be a one-dimensional player batting higher up the order,” said Yadav. “You have to bring in that change. You have to, because this is played at such an international level that people pick your strong and weak points very easily.”

Yadav was always a sweet timer of the ball; and to compensate for his off-side weakness, he could always fall back on his strengths: cheeky ramp shots, sweeps and scoops.

“I didn’t think too much about the outcome. It was just about practising normal drives, normal cuts and slowly it was built into my muscle memory," Yadav said. "I wasn’t too hard on myself. One day I was batting with a blank mind. And I actually did it.”

If he took to the acquisition of new skills with an easy mind, for his physical transformation he went the other way.

“After 2018, I sat with our trainer Paul Chapman and decided the boxes that needed to be ticked going into the next season. He said ‘If you are batting higher up the order, you need to bat at least 15 overs if you play really well in that game. And you also have to field for 20 overs.’ I had never done that before,” said Yadav. “I only batted for 10-15 balls (at KKR) and fielded for 20 overs. So this was a completely different scenario for me. I had to be prepared for 2019.”

Yadav began to challenge his body, fighting his comfort zone.

"I used to train in the evening when it used to be a little cooler. I changed that to two in the afternoon,” said Yadav. Realising the importance of middle overs when spinners operate, Yadav started batting on Mumbai’s red soil turners right in the middle of the day. “I started practising in the afternoon, between 12-3 pm when the pitches are very dry. That helped me a lot in improving my game against spin.”

Being hard on himself was redemptive, given Yadav’s pretty topsy-turvy career till 2017. There was an on-field fracas with Mumbai teammate Shardul Thakur in 2014. He lost Mumbai’s captaincy as well. The IPL too wasn’t offering him many chances at that time. But Yadav’s faith in the game wasn’t shaken.

Things first started falling in place in 2018 when Yadav started to bat at No 4 for Mumbai Indians. “Then the team management came up to me and asked if I would like to open the innings. I said ‘Yes, 100%’. I took that as a challenge. I came from a different setup, batting at a completely different position. Coming here, batting higher for such a big team, I took it as a challenge which later on became a responsibility. It wasn’t easy when I came into the setup. But Mahela and Sachin sir said ‘you don’t have to do anything different. Do what you have been doing and enjoy your time in the middle’.”

“I did exactly that. And never looked back.”

If the 2018 IPL was a sign of the changes to come, 2020 was really where Yadav was at the peak of his ability, thriving in the role of a finisher at No 3. He averaged 40 at a strike rate of 145, both career best numbers in the IPL. He also hit 61 boundaries, the most by a Mumbai Indians batsman and 15 more than Quinton de Kock, the next best boundary hitter. Yadav finally knows his game. He knows he can take his time. That's what makes him more menacing in the death overs. “There are power hitters in this team. It makes my job easier. I don’t need to do anything out of the box and fill in their shoes. I just need to be myself."