“The rules establish a soft-touch. self-regulatory architecture and a Code of Ethics and a three-tier grievance redressal mechanism for news publishers and OTT Platforms and digital media,” minister for electronics and information technology (MeitY) Ravi Shankar Prasad said in a Thursday briefing.

The Centre on Thursday notified rules that will govern online content, which includes allowing users to dispute action taken against them by social media intermediaries such as Facebook and Twitter, and setting up a three-tier self-regulatory framework for so-called over the top (OTT) platforms such as Amazon Prime, Netflix and Hotstar, and online news media entities.

“The rules establish a soft-touch. self-regulatory architecture and a Code of Ethics and a three-tier grievance redressal mechanism for news publishers and OTT Platforms and digital media,” minister for electronics and information technology (MeitY) Ravi Shankar Prasad said in a Thursday briefing.

Prasad added that social media intermediaries are welcome to do business in India, and while the government welcomes dissent, abuse of social media has to be curbed.

His colleague, minister of information and broadcasting (I&B) Prakash Javadekar, said a free press symbolises the spirit of democracy, but no one should be allowed to spread fake news. He added that while legacy media was governed by Press Council of India rules, there has been no such regulation for online media, stressing the need for a level playing field. 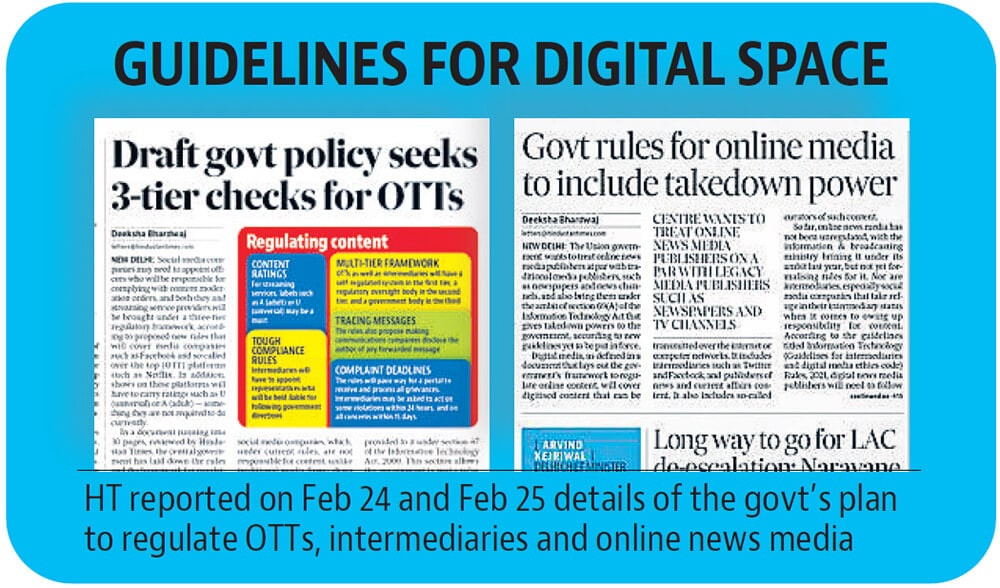 The government said the moves would create a level playing field for traditional and new media. MeitY and the ministry of I&B have been working to come up with a comprehensive framework to regulate content on OTTs and social media intermediaries. OTT platforms such as Amazon Prime have come under fire for airing content that some claimed “hurt religious sentiments” . Social media companies such as WhatsApp and Twitter, meanwhile, have sparred with the state over an update in usage policy in the case of the former, and non-compliance with take down orders in the case of the latter.

The government said the rules would create a level playing field for traditional and new media.

The policy — notified on Thursday evening — also includes bringing digital news publishers under the ambit of Section 69(A) of the Information Technology Act, which empowers the government to order the blocking of access to content that is considered a threat to public order. An authorised officer from the I&B ministry who will head an interministerial committee at the apex of the self-regulatory system can also issue this order under emergency circumstances where the companies will not be given a chance to offer an explanation. The committee will have to meet within 48 hours to ratify the emergency block.

The Internet and Mobile Association of India (IAMAI), whose members include Amazon Prime, Netflix, Hotstar, Facebook and Twitter, welcomed the announcement of the framework.

“IAMAI has welcomed the much awaited Intermediary Guidelines 2021. The guidelines, focused primarily on consumer complaints, will help users of online content and social media resolve their complaints in a process oriented manner,” the association said in a statement.

A Facebook spokesperson said: “We have always been clear as a company that we welcome regulations that set guidelines for addressing today’s toughest challenges on the Internet. Facebook is committed to people’s ability to freely and safely express themselves on our platforms.”

The spokesperson added: “The details of rules like these matter and we will carefully study the new rules that were just published. We acknowledge and appreciate the recognition from the Minister on the positive contributions of social media to the country. Facebook is an ally for India and the agenda of user safety and security is a critical one for our platforms. We will continue to work to ensure that our platforms play an enabling role in fuelling the exciting digital transformation of India.”

When asked about the absence of consultation with digital news media entities, Javadekar said no list of such entities existed.

Prasad stressed that the platforms cannot follow double standards when it comes to different countries. “There can’t be a double standard for Capitol Hill and Red Fort violence,” he said.

In a statement, the ministry of information and broadcasting said that it held consultations in Delhi, Mumbai and Chennai over the past one-and-a- half years wherein OTT operators had been urged to develop a “self-regulatory mechanism”.

“The government also studied the regulatory models followed in other countries, including Singapore, Australia, EU and UK and has gathered that most of them either have an institutional mechanism to regulate digital content or are in the process of setting-up one,” it added.

The rules seek to empower users by mandating the intermediaries, including social media ones, to establish a grievance redressal mechanism. A Grievance Officer shall acknowledge the complaint within 24 hours and resolve it within fifteen days.

HT on Wednesday reported that social media companies need to appoint officers who will be responsible for complying with content moderation orders, and both they and streaming service providers will be brought under a three-tier regulatory framework, according to the proposed new rules that will cover media companies such as Facebook and OTTs such as Netflix. In addition, shows on these platforms will have to carry ratings such as U(universal) or (Adult) —something they are not required to do currently.

Countries including India have felt the need to regulate social media companies, which, under the current rules, are not responsible for content, unlike traditional media entities; demands have been made to regulate content on OTT platforms, with some shows on these, such as Amazon Prime’s Tandav, running into trouble for offending religious sentiments.

In the document, titled Information Technology (Guidelines for Intermediaries and Digital Media Ethics code) Rules, 2021, the government cited powers provided to it under section 87 of the Information Technology Act, 2000. This section allows the government to make rules to carry out the provisions of the law by notification in the Official Gazette and in the Electronic Gazette.

CPI(M) politburo member Nilotpal Basu said, “Social media has been misused to the hilt by the BJP and its IT cell. International studies show India is home to maximum fake news and distorted content. Now, that citizen groups and individuals are opposed to government’s assault on human and constitutional rights, the government is out to stifle that opinion through the new framework.”