In the past week, more than 56% of all new infections of the coronavirus disease reported across India and 45% of Covid-19 deaths can be traced to just one state, Maharashtra. The outbreak in the western state, which is by a far margin the worst-hit in the country, has (rightfully) dominated headlines over the past monthand-a-half. But is the outbreak in Maharashtra magnifying the severity of India’s second wave? Do India’s current Covid numbers look better if we remove Maharashtra’s numbers from the national tally? The answer to both is: not really. Indeed, the magnitude of the outbreak in Maharashtra may have actually masked the march of the viral disease in other states.

Removing Maharashtra from the national tally results in two key, but grim, findings. First, the severity of India’s second Covid wave does not reduce at all; it is only delayed. Second, it shows that nine other states, spread across the country geographically, are rapidly becoming Covid-19 hot spots.

On the basis of the seven-day average of daily infections, which denotes a region’s case trajectory, India’s first Covid wave bottomed out on February 11 at 10,988. This is the point from where the second wave started.

If Maharashtra’s numbers are removed from the national numbers — it is important to caveat that this is an academic exercise since some of the infections elsewhere in India might have originated in Maharashtra and vice versa — the bottoming out of the Covid wave still takes place, but is delayed by 12 days. Instead of the trend reversing on February 11, the Indian trajectory (without Maharashtra) bottoms out on February 23 (at an average of 7,395 new cases a day). But the reversal is just as evident even without taking Maharashtra into account.

To be sure, there is a gap of over 3,000 cases a day in the two troughs, but that is to be expected given the state excluded is the country’s second most populous (after Uttar Pradesh) and has been a massive hot spot throughout India’s battle with Covid. 2. ... but the severity of the wave remains intact

If the 12-day gap is taken into account and the two outbreaks (with, and without Maharashtra) aligned from the day each of them bottomed out, it is clear that even without counting numbers from Maharashtra, cases across the country are rising just as fast. Without Maharashtra, the country’s case trajectory has grown 288% in the 37 days since bottoming out – the seven-day average of daily cases went from 7,395 on February 23 to 28,670 on April 1.

To put these two sets of numbers in context, it is important to look at the overall numbers (India including Maharashtra) 37 days since its bottoming out. The seven-day average of daily cases at that point in time was 34,271, or 212% more than its trough value.

This means that even without Maharashtra, the country’s case rate (while delayed by 12 days) is rising at a faster rate today than it was with Maharashtra taken into account. 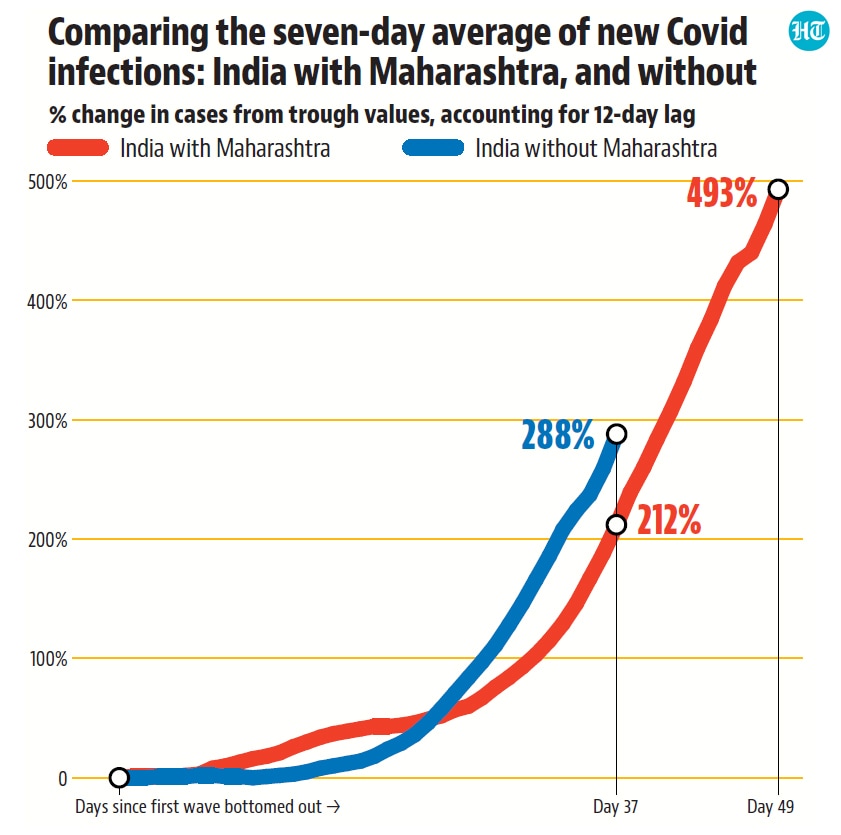 But when the same numbers are looked at after excluding Maharashtra, it is clear that there are nine regions that have each contributed heavily to the tally. These nine regions – Karnataka, Chhattisgarh, Punjab, Tamil Nadu, Gujarat, Madhya Pradesh, Kerala, Delhi and Uttar Pradesh – are responsible for nearly 75% of all new infections in the country in the past week (excluding Maharashtra).

There are two worrying things about the nine. One, they are spread geographically across the country. This counters the current idea that the regions currently reporting rising cases are primarily located in western part of the country (like Maharashtra, Gujarat, etc). Two, with the exception of Kerala, the 7-day average of daily cases is rising in all nine.