An HT analysis of Google Trends data for India has found that past outbreaks of the disease led to an increased interest on it in terms of Google searches.
READ FULL STORY
Hindustan Times, New Delhi | By Abhishek Jha

With a prolonged and bitter winter, 6601 cases of swine flu had been recorded across India by February 3 this year. Already, the number of cases this year is the fourth highest in the past eight years, the period for which year-wise data is available from the National Centre for Disease Control.

The highest number of cases in the past eight years was registered in 2015, when a total of 42,592 cases were reported in the country, 6.5 times the cases reported so far this year. To be sure, more than 10 months are still left for 2019 to end.

An HT analysis of Google Trends data for India has found that past outbreaks of the disease led to an increased interest on it in terms of Google searches. A further analysis of common search terms related to the disease this year shows that interest in it was concentrated in north and north-west India.

However, the trends in state-wise interest in the disease in Google search is not in keeping with the state-wise trend in number of reported cases of swine flu.

For example, between January 2014 and February 2019, the peak interest in search terms ‘swine flu’, ‘swine flu symptoms’, and ‘swine flu vaccine’ was observed in the February 15 to February 21 week of 2015, the year when maximum number of swine flu cases were reported.

Among the three terms ‘swine flu’ is the most searched throughout. This year up to February 3, while interest in the term increased continuously until January 30, there was a spike on January 17, the day on which the news of BJP president Amit Shah getting admitted to AIIMS for treatment of swine flu broke.

A sub-region wise analysis shows that interest for ‘swine flu’ was concentrated in north India, after adjusting for search volumes, with the highest interest in Punjab. Punjab has recorded the eighth highest number of swine flu cases in the period, and third highest number of deaths due to the disease this year.

Rajasthan, which has recorded the highest number of swine flu cases and deaths in the same period, had the fifth highest interest in the search term. 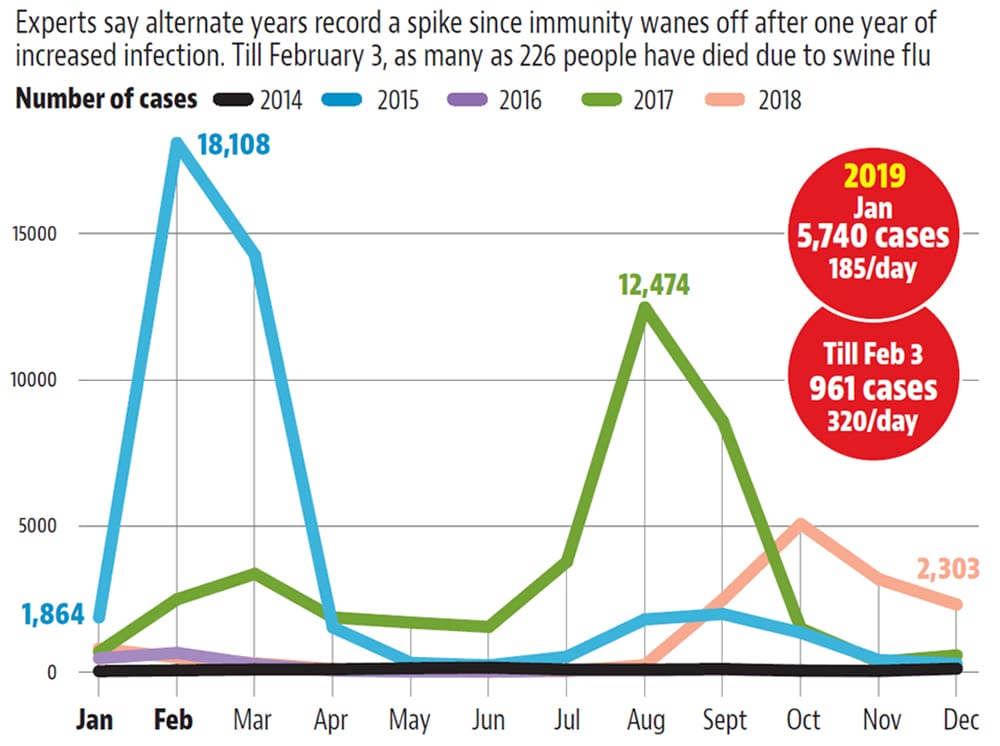 Looking at just one search term may not reflect the true regional distribution of interest in the disease. People looking for information on the disease may also type in terms in addition to ‘swine flu’ in their search phrase. For example, one might search for ‘symptoms of swine flu’ or ‘best hospital to get treated for swine flu’, etc.