Home / India News / Number theory: In warm 2022, almost no place on Earth was colder than ‘normal’

Number theory: In warm 2022, almost no place on Earth was colder than ‘normal’

While markers such as the global average of temperature shown above tend to hide regional variations, a disaggregated analysis of temperature in 2022 shows that both the northern and southern hemispheres were the sixth warmest on record.

On average, India is experiencing one of the coldest Januarys in history, according to data from the India Meteorological Department (IMD). However, the winter season (officially it runs from December to February) started off warm. December 2022 was the third warmest December since 1880 by mean temperature, which is based on temperatures observed throughout the day. This pushed 2022 into becoming the fifth warmest year ever recorded in India. While IMD reported this through its own analysis earlier this month, data from NASA released in on January 12 allows one to check the pattern for the entire globe. Here is what it shows.

HT reported earlier that unless December turned very cold, 2022 was likely to be among the warmest years for the planet. December 2022 ended up being the eighth warmest since 1880, the earliest year for which NASA has estimated temperatures. Since all months except November were at least among the top seven warmest, a warm December ensured that 2022 was a record-breaking warm year too. It was ranked as the fifth warmest since 1880 by NASA. Berkeley Earth, a US non-profit that works with environmental data and produces its own temperature estimates, also estimated 2022 as the fifth warmest on record. The National Oceanic and Atmospheric Administration (NOAA), a government agency of the US government, pegged 2022 as the sixth warmest on record. Despite the minor differences in their estimates of how warm 2022 was, all three agencies record the past nine years as the warmest nine years in their respective estimates. 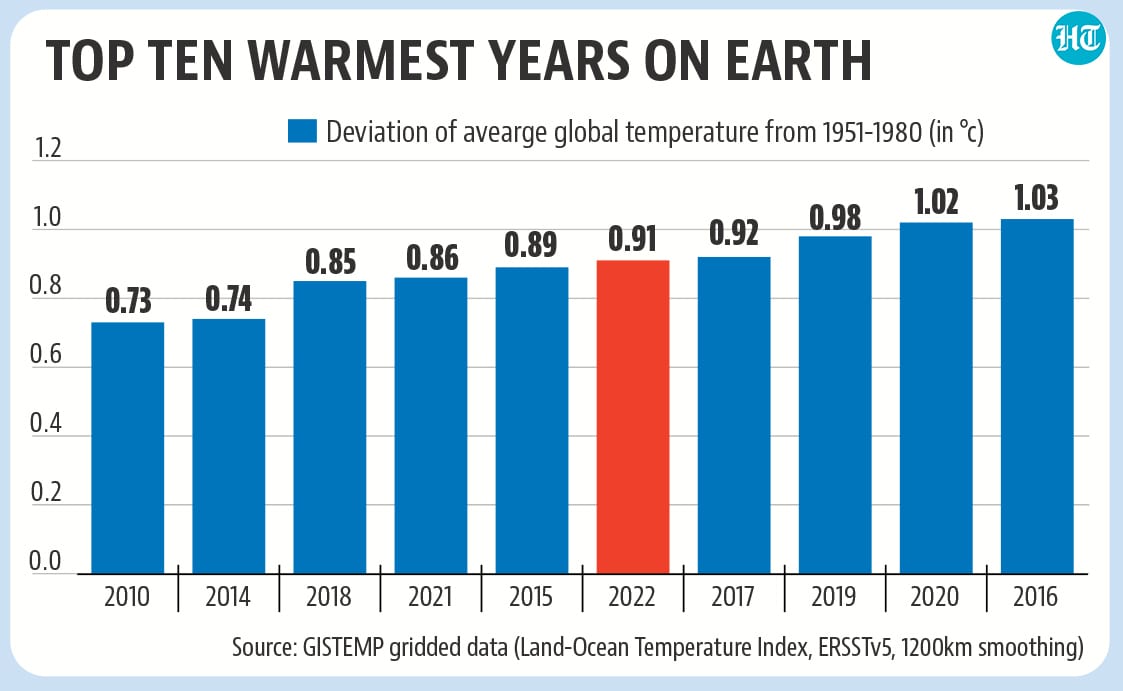 Almost no place on land was colder than “normal” in 2022.

While markers such as the global average of temperature shown above tend to hide regional variations, a disaggregated analysis of temperature in 2022 shows that both the northern and southern hemispheres were the sixth warmest on record. At the level of countries, 2022 was the among the top 10 hottest years for 95 of 151 countries for which the analysis is possible; among the top five hottest years for 59 countries, and the hottest ever for 21 countries. This was not compensated by a relatively cool year in any country, except the island country of French Polynesia in the Pacific Ocean, which experienced its 23rd coolest year since 1880. This was largely because 2022 was a La Niña year, a periodic weather phenomenon that results in cooling of the Pacific Ocean. Barring French Polynesia, 2022 was among the top half of the warmest years since 1880 for all countries, and the top 25% warmest years for all countries except six (Botswana, Zimbabwe, Zambia, Ecuador, Peru, and French Polynesia).

The discussion above makes it clear that the planet is experiencing relentless warming. Why is this happening? “The reason for the warming trend is that human activities continue to pump enormous amounts of greenhouse gases into the atmosphere, and the long-term planetary impacts will also continue,” Gavin Schmidt, director of GISS, the NASA centre whose data has been used in this analysis, said in a press statement.

To be sure, one does not need to be an expert to understand the reason behind global warming today. Despite this being common knowledge, the world did not appear to be on track to fix this problem in 2022. Some scientists have estimated (these can be revised as more data for the year becomes available) that combined fossil fuel and land-use-change-based emissions in 2022 were likely the highest on record. If this trend continues, hot as 2022 was, it is likely to end up ranking as a relatively cool year in the future.