Home / Business / Is crude, edible oil inflation relief on the cards for India?

Is crude, edible oil inflation relief on the cards for India?

The fuel and energy basket sub-component has a share of 6.84% in the CPI basket. For oil and fats (edible oil) sub-category, this share is 3.56%. A simple calculation using the weighted share of these two sub-components shows that they have been a key driver of headline inflation in the past few months.

India’s benchmark inflation rate, as measured by the Consumer Price Index (CPI) has been above the 6% mark – the upper limit of RBI’s comfort band under the inflation targeting framework – for six consecutive months now. While most economists, including those in the Monetary Policy Committee (MPC) of RBI expect inflation to stay above this threshold for the rest of this calendar year, some relief could be on way via the two critical oils in India’s CPI basket: crude petroleum oil and edible oils. While that could ease some pressure on the inflation front, the squeeze on household budgets may still remain.

Fuel and edible oil prices have been among the key drivers of inflation in the recent past...

The fuel and energy basket sub-component has a share of 6.84% in the CPI basket. For oil and fats (edible oil) sub-category, this share is 3.56%. A simple calculation using the weighted share of these two sub-components shows that they have been a key driver of headline inflation in the past few months. Numbers speak for themselves. Between January 2012, the earliest period for which annual growth numbers are available under the current CPI series, and December 2020, the monthly contribution of these two sub-categories in headline inflation -- – change in weighted average of fuel and light and edible oils category as a share of change in overall CPI – was higher than 20% in only three months: May 2017, June 2017 and November 2018. This number crossed 20% once again in January 2021, came down briefly in February and March 2021 and then stayed above the 20% mark in every month between April 2021 and January 2022. The peak came in September 2021 when these two commodities were responsible for 44.7% of the rise in overall inflation. This number has been falling continuously since September 2021 and it has been less than 20% since February 2022. The June 2022 value for the contribution of fuel and light and edible oil category to headline inflation is 15.5%, the lowest since November 2020. 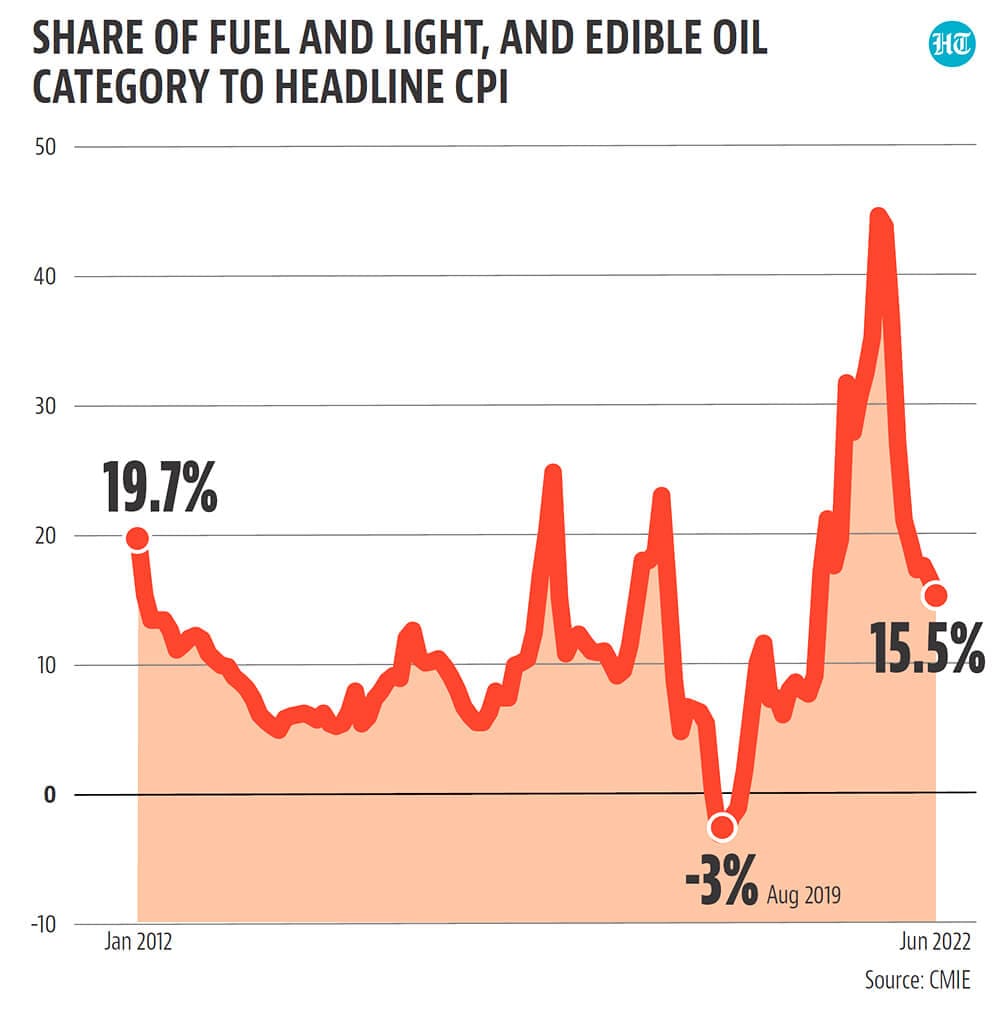 ... and while there is base-effect at play , prices have also come down

To be sure, inflation rates measure the pace of change in prices and not prices per se. So, if prices stagnate at higher levels for a longer period of time, inflation rates can come down even if prices remain high. Is the moderation in inflation for the two critical oils in India just a statistical illusion? Data suggests that it is partially a base effect illusion, but what is also true is that prices have come down from their peaks in the recent past.

For example, data from the United Nation’s Food and Agricultural Organisation (FAO) shows that the edible oil sub-index has come down from its all-time high of 251.8 in March 2022 to 211.8 in June 2022. To be sure, the June price is still much higher than the historical average price.

Similarly, data from the ministry of petroleum shows that the price of India’s crude oil basket had fallen to $101.48/barrel on July 15, which is significantly lower than the monthly average price of $116.01/barrel in June. The June price was the highest since April 2012, when it was $117.97/barrel. 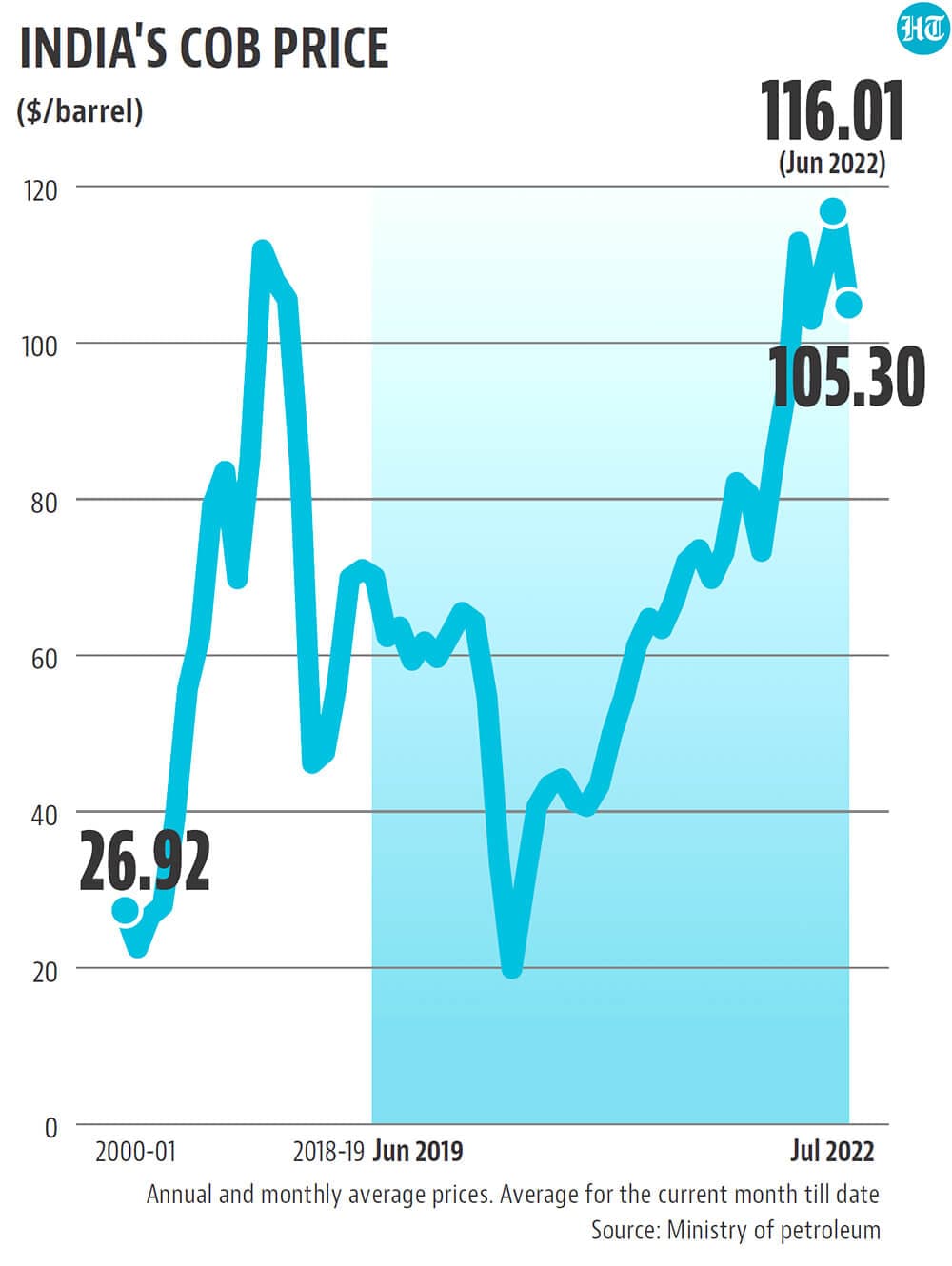 Will this reduce the squeeze on household budgets?

This is a more difficult question to answer. A simple example can make this clear. If petrol prices were to remain at ₹100 per litre in July 2021 and July 2022, annual fuel inflation would actually be zero. However, if mass incomes have not increased in proportion to prices – and there is enough anecdotal evidence to assume that they have not – then, a low-inflation scenario can be entirely consistent with a high-price scenario. This would also mean that general households budgets will continue to remain under stress. 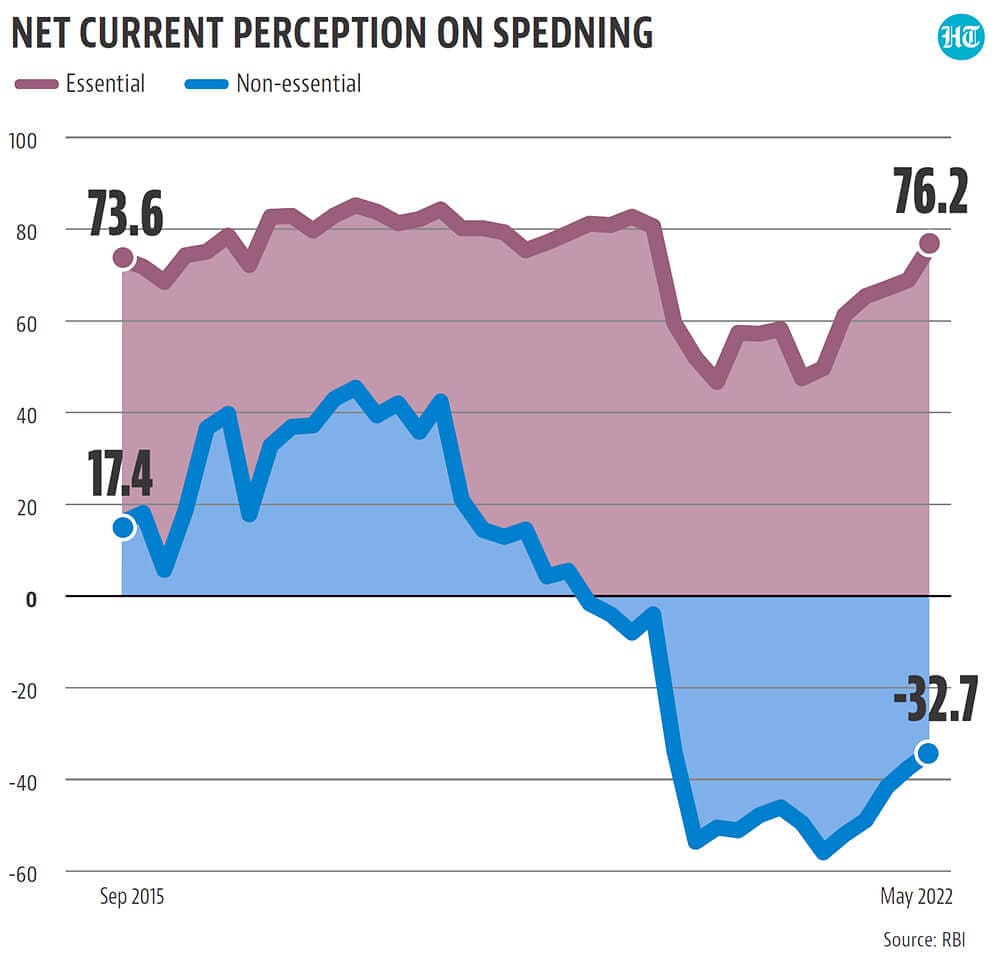