India launched the world’s biggest vaccination drive against the infectious disease on January 16.

At least nine states underutilised vaccine doses supplied to them between January and March, causing a slowing in the immunisation drive against the Covid-19 pandemic, according to central government data, with officials saying that demands by various states to widen and decentralise the inoculation programme may have been premature.

India launched the world’s biggest vaccination drive against the infectious disease on January 16. In the first two phases of the drive up to March 31, healthcare and frontline workers were covered exclusively, followed by Indians older than 60 and those above 45 who suffer from co-morbidities. 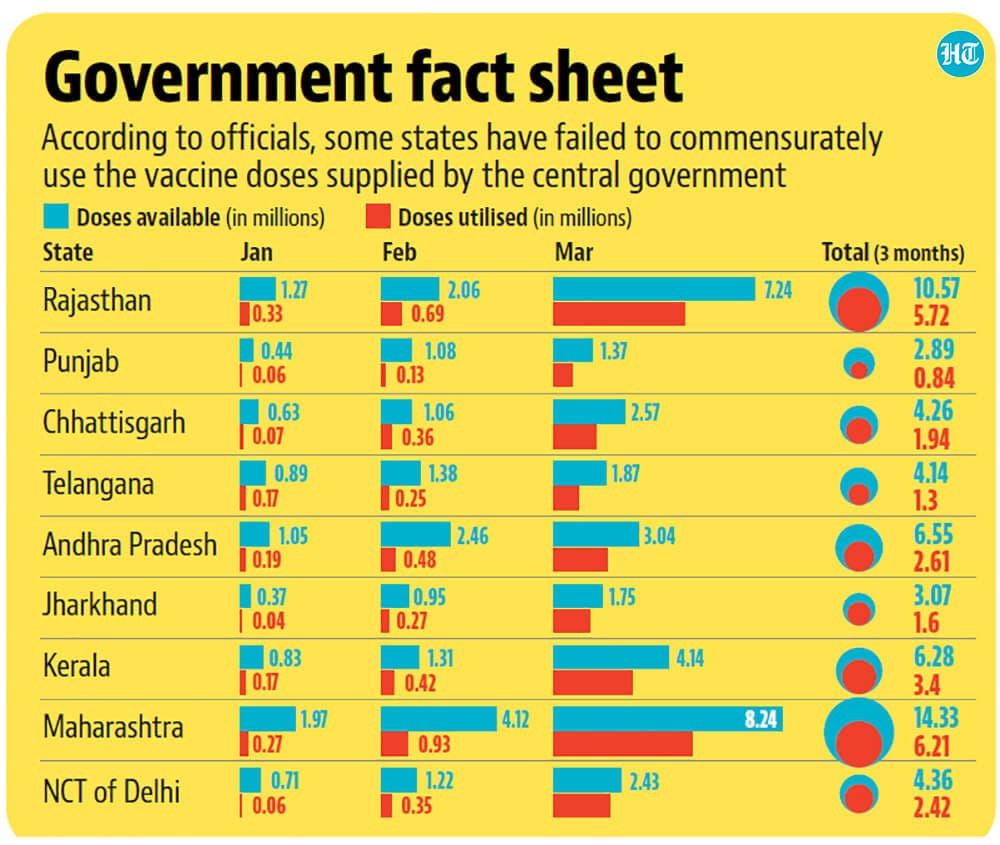 “These states, despite having adequate supplies of vaccines from the Centre in January, February and March, failed to commensurately use those supplies to effectively vaccinate a large enough proportion of their respective populations,” a top government official said on condition of anonymity.

“In each of these states, the Centre supplied an increasing number of vaccines every month,” the official added.

While the nationwide drive got off to a slow start amid vaccine hesitancy and lack of awareness, officials said some states failed to commensurately use the doses supplied by the Centre. In the first two phases, the vaccines were provided by the central government free of charge.

Maharashtra used only 6.2 million doses of the 14.3 million provided by the Centre till March 31, and Delhi administered 2.4 million of the 4.4 million doses it was granted.

Data showed that while the pace of vaccinations in these states was abysmally low in the first two months of the vaccination drive, the coverage picked up in terms of the proportion of the total number of doses provided by the Centre in the third month.

“A few states have contributed disproportionately to the slowdown in the nationwide vaccination drive,” the official quoted above said.

Another official said that several states demanded that the vaccination drive be widened and decentralised to cover all adults very early in the programme, even though they were unable to utilise the doses provided by the central government. Now that the states are demanding that the process to purchase vaccine doses to ramp up supplies be centralised, the Centre is considering steps in this regard, the official added.

The government’s data also showed that Delhi, Maharashtra, Punjab and Telangana have so far administered the first dose of vaccines to health care workers lower than the national average of 81%.

Until June 5, India administered more than 230 million doses of Covid-19 vaccines, second only to the US, which has administered about 300 million shots so far in the fight against the pandemic that began raging early last year